Zack Wentz knew that sports would be a huge part of his college experience.

He was a natural athlete, excelling in many outdoor activities during his childhood in Menlo Park, Calif. Even as a freshman in high school, he was the top player on the varsity tennis team and won the league championship.

But then a freak accident left Wentz paralyzed from the chest down. His dreams of an active and athletic life seemed far out of reach.

If he knew then what he knows now, he might not have been that worried.

Now a senior at USC, Wentz has coached and competed in several sports. He launched a wheelchair basketball tournament as part of Swim With Mike, the USC scholarship initiative that helps athletes with physical disabilities overcome their challenges. 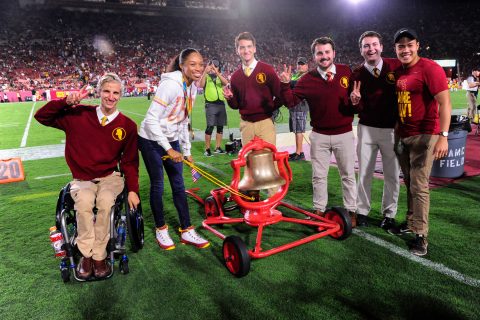 Zack Wentz visits the field with the Trojan Knights. (Photo/Courtesy of Zack Wentz)

Wentz found a natural home for his school spirit with the Trojan Knights, a service organization dedicated to upholding the university’s traditions. And he discovered a new passion: making the USC University Park Campus more accessible and welcoming to people with physical disabilities as an advocate with USC’s Undergraduate Student Government.

Many of those achievements can be traced back to a seemingly innocuous incident in his sophomore year of high school. It was a moment that set Wentz on his path to the Trojan Family, although he wouldn’t know it until much later.

The path to USC disabilities advocate

Wentz knew he was pushing the limits. He had spent hours skiing with a buddy, and now he had to hustle to get back in time for class. The 15-year-old quickened his pace as he lugged his equipment toward the Swiss town of Zermatt, where he was enrolled in a program that combined rigorous academics with rugged outdoor activities like skiing and ice climbing. 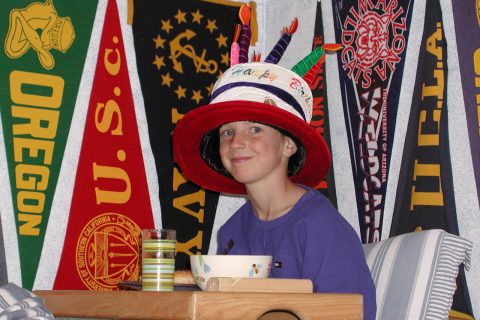 Wentz had been a collegiate sports fan since childhood. (Photo/Courtesy of Zack Wentz)

As he hurried down a flight of stairs, Wentz slipped on the last step and fell backward. His skis clattered around him. But other than a banged-up thumb, nothing else seemed hurt.

Several weeks later, he awoke in immense pain. His back and chest throbbed. His legs felt weak. A doctor examined Wentz and concluded he had inflamed a nerve that wraps around his spine. A few pills cleared up the symptoms. Everything was back to normal.

Wentz finished his semester abroad and returned home. His family had planned a ski getaway to Lake Tahoe, and Wentz was excited to show off his new skills on the slopes. But the first morning of the trip, he woke up again in agony.

“It took the worst pain I had in Switzerland and tripled it,” he said. “It was excruciating.”

In the 25 minutes it took for the ambulance to arrive, Wentz slowly lost all feeling and movement from his feet to his chest.

“I knew something wasn’t right,” he said. “I was freaking out and really scared.”

The culprit is revealed

Wentz was airlifted to Reno, where a scan revealed a massive blood clot along his spine. His minor fall in Switzerland likely had caused the bleeding to start. The clot grew unnoticed, until it compressed his spinal cord.

About Swim With Mike

The 38th annual fundraiser for physically challenged athletes starts Friday at 1 p.m. with a wheelchair basketball tournament at the Lyon Center. A swim-a-thon opens at the USC Uytengsu Aquatics Center on Saturday at 7:30 a.m. It features swim relays, water polo exhibitions, a barbecue, a silent auction and other festivities.

Learn the story behind Swim With Mike and how it grew from USC to become a nationwide phenomenon. Watch the video.

Doctors removed the clot, but the damage had been done. He would not recover any movement or feeling below his first thoracic vertebra. Yet it could have been worse. A millimeter higher, Wentz said, and the injury could have affected his arms and hands.

“Although it has changed my life in many ways and I feel the negative effects every day, there’s a lot to be thankful for,” he said.

His passion for music is one positive to emerge from the tragedy. A family friend gave Wentz a keyboard to keep him entertained during his recovery, and he taught himself to play by ear. He’s been teaching piano for eight years now, is a burgeoning music producer and will graduate with a music industry minor.

New vision: help others with disabilities

After three months of rehabilitation, Wentz returned home to Northern California. His thoughts soon turned to the sports-filled college experience he had envisioned since childhood. He set his mind to making it a reality, one way or another. And he found the ideal place to pursue his goal: USC.

“That was by far my dream school,” he said. “It was perfect in regard to weather, campus size, terrain, academics, networking, sports — just the works.”

After his acceptance letter came in the mail, there was no question he was going to join the Trojan Family. He didn’t even bother opening letters from other colleges.

As soon as he arrived at USC, Wentz put his plan into action. First, he organized a team of talented soccer players at Pardee Tower, his freshman residence hall. Then he coached them to four straight championship appearances in the university’s highly competitive intramural league.

“That was a great experience, but I wanted to be able to play,” he said. “I wanted to compete with my friends, and I wanted to give that ability to other people in similar situations to mine.” 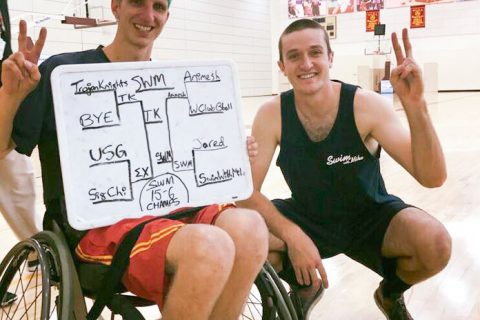 His solution: founding the Swim With Mike wheelchair basketball tournament. Open to all students and members of the USC faculty and staff, the event draws numerous teams from across campus. It takes place on the same weekend as Swim With Mike’s annual fundraiser. This year, the playoffs start Friday and the championship game will be a highlight of the Saturday festivities.

Wentz sees the tournament as a great way to give back to a program that not only provided him with a generous scholarship, but also served as a critical source of support and encouragement.

“Swim With Mike has just meant the world to me. It’s such a tight-knit group of people,” he said. “It’s been so influential and has really shaped my time here at USC.”

Wentz also returned to another sport he loved, working his way up the ranks of the wheelchair tennis world. He played in his first tournament just months after being injured, taking the top spot in his division.

Creating a welcoming home for Trojans with disabilities

Although he focused much of his attention on athletics and academics as a freshman, Wentz soon found himself drawn to another important pursuit.

“I knew I wanted to make USC a more accessible and comfortable place for all students, especially students with physical disabilities,” he said.

It started as a solo mission, with Wentz trying to identify resources and make minor improvements. But fellow Trojan Knight and former student body president Edwin Saucedo learned about his work and encouraged Wentz to get involved with Undergraduate Student Government. He is now the organization’s director of accessibility affairs.

The new post amplified his influence and resulted in notable changes around campus. He is especially proud of efforts to make dining halls more accessible to students with disabilities.

Some fixes have been relatively simple, like providing enough space around tables to allow wheelchairs to pass unimpeded or making sure self-service food areas are within easy reach. Others are more challenging, like his proposal to reprogram student IDs so when they are swiped, employees can see whether a student might want assistance.

“Some people might not need help,” he said. “It might be annoying or frustrating or disappointing if they keep getting asked all the time.”

I’m just trying to use my unique experience and perspective in life and at USC to leave my mark.

Wentz also strives to ensure all students have equal access to the same spaces around campus. For example, he noted that an outdoor area on the second floor of the Tutor Campus Center can be reached at all hours by stairs, but the elevator to that floor was locked at night. He worked with USC leaders to provide 24-hour access.

“I’m just trying to use my unique experience and perspective in life and at USC to leave my mark,” he said.

As he prepares to graduate with a degree in economics next month, Wentz envisions several potential career paths, including nonprofit advocacy, sports statistics or music production. But for now, he is continuing to cement his legacy while enjoying his final moments as a student.

“It’s definitely bittersweet,” he said. “I’m just taking it one day at a time — trying to be conscious each day of how I can continue making the school a better place.”

Kristina Ripatti’s life was upended after being shot while chasing down a robbery suspect. Now she forges a new identity in social work at USC, with help from a Swim With Mike scholarship.

Swim With Mike has raised more than $15 million for the Physically Challenged Athletes Scholarship Fund.

USC senior rebounds from tragedy to help others with disabilities