Zachary Pickett conquered every sport he tried as a kid.

The youngster began swimming competitively at age 5. A string of other athletic pursuits soon followed — baseball, basketball, volleyball, track and soccer. By high school, the lanky teen was a rising star on the water polo team. Murmurs of athletic scholarships started by his sophomore year. Then everything changed.

It was a blisteringly hot day in August. Pickett was working his summer job as a lifeguard at a lake in his hometown of Cameron Park, a suburb east of Sacramento. He decided to take a quick dip with a few of his friends.

When he dove into the water, his head struck a hidden sandbar just under the surface. He knew right away something was wrong. He couldn’t feel anything below his waist. He called out for help.

“One of my lifeguard friends came over and I said, ‘I can’t move my legs. Can you touch my legs?’” Pickett said. “He told me, ‘I’ve been grabbing your legs for like 10 seconds.’ I thought, oh man, I didn’t feel any of that.”

Doctors at UC Davis Medical Center confirmed his fears. Pickett had crushed his C-7 vertebrae, damaging his spinal cord near his neck. His carefree summer had turned deadly serious in an instant.

A competitive spirit pays off

After surgery to stabilize his spine and 10 days in the intensive care unit, Pickett moved into recovery mode. For the next two and a half months, he dedicated himself to regaining strength and mobility.

“It’s weird trying to learn how to get around again,” he said. “You kind of feel like a kid. You have no idea how to do anything. You basically have to learn how to live again.”

About Swim With Mike

The 38th annual fundraiser for physically challenged athletes starts Friday at 1 p.m. with a wheelchair basketball tournament at the Lyon Center. A swim-a-thon opens at the USC Uytengsu Aquatics Center on Saturday at 7:30 a.m. It features swim relays, water polo exhibitions, a barbecue, a silent auction and other festivities.

Learn the story behind Swim With Mike and how it grew from USC to become a nationwide phenomenon. Watch the video.

He embraced intense sessions of occupational and physical therapy. He turned every task into a competition, pushing himself to eke out one more exercise. It paid off.

A month and a half into his recovery, he noticed tiny flickers of movement in his toes. His spinal cord had not been fully severed. Soon he regained some strength and mobility in his right leg. He could now cover short distances with the help of a cane or walker.

Adjusting to a new life with some familiar pursuits

Four months after his injury, Pickett was back home. He had already returned to school a month earlier, so he barely missed a beat. He maintained stellar grades, served as junior class president and completed his Eagle Scout rank in the Boy Scouts.

And he was back in the pool. By April 2013, nine months after that fateful dive into the lake, he was competing at the Paralympic National Championships. He won the 50-meter backstroke in his division.

Then came the big surprise. He rejoined the water polo team, even though the sport emphasizes leg strength.

“At first, I just started going to practice because that’s what all my friends were doing,” Pickett said. “But then I gradually learned how to play without using my legs. You kind of have to be like a shark. You just can’t stop moving.”

He would often slip into the pool for warmups before anyone on the opposing team noticed, and just looked like one of the guys. That led to looks of shock as he lined up in his wheelchair to shake hands after the game.

“People were definitely confused at first,” he said. “All my friends saw my progression from day one, so I don’t think they were fazed at all.” 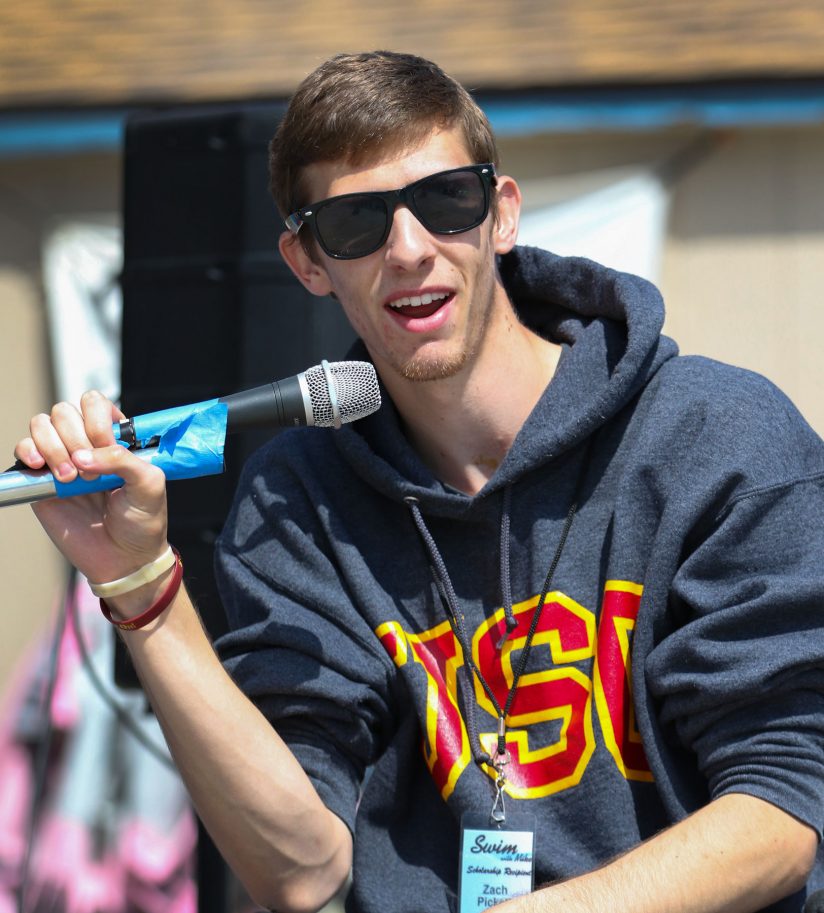 Pickett speaks during a previous fundraiser for the USC program. (Photo/Kaia Hedlund)

As his senior year began and Pickett started planning for college applications, one university stood out above the rest thanks to a special program. Pickett had heard about Swim With Mike, the USC initiative that supports physically challenged athletes, within days of his injury. His aunt had competed in synchronized swimming with the sister of Mike Nyeholt, the USC alumnus who inspired the organization. She told Pickett about the program, and USC shot to the top of his list of dream schools.

Not only did was he accepted, but he also received a Swim With Mike scholarship. It provided $50,000 a year, covering much of his tuition. And it gave him an instant network of friends and supporters.

Pickett embraced the program, becoming the Swim With Mike chair of the Trojan Knights, the USC service and spirit organization. He works alongside Ron Orr, founder of Swim With Mike, in the university’s athletics fundraising office. He also kept up his passion for sports, competing in the group’s wheelchair basketball tournament.

“For the first two tournaments, I was the captain of the winning team,” he said. “I went abroad last semester, so I couldn’t get the three-peat, but I’m hoping to defend my title this year.”

It’s just a great path USC leads you on to help you succeed.

He will get his chance in a few days. The tournament takes place Friday, April 6, in advance of the organization’s annual fundraiser this Saturday at the USC Uytengsu Aquatics Center. It will be Pickett’s last Swim With Mike fundraiser as an undergrad. He graduates in May with a degree from the USC Marshall School of Business and a minor in sports media studies. He envisions working in operations or management with a professional sports team.

But he plans to stay involved with the Trojan Family, returning for Swim With Mike fundraisers and encouraging others to support the campaign.

“I just want to try to give back to the scholarship,” he said. “It allowed me to come here and get an education. I made great friends, great connections — it’s just a great path USC leads you on to help you succeed. I’m more than happy to do my part to help the next person.”

Kristina Ripatti’s life was upended after being shot while chasing down a robbery suspect. Now she forges a new identity in social work at USC, with help from a Swim With Mike scholarship.

Swim With Mike has raised more than $15 million for the Physically Challenged Athletes Scholarship Fund.