Could a unique bacterium lead to a sustainable energy solution?

Scientist Moh El-Naggar and his team think it’s possible. They work with the Shewanella oneidensis species of bacteria, one of a group of microbes that essentially “breathe” rocks.

As part of their metabolism, the bacteria have developed a way to transfer electrons from the interior of the cell across their outer membrane to a receiving surface in the outside world.

The process is akin to the way humans use oxygen to breathe. The body takes electrons from food and, ultimately, transfers those electrons to oxygen inhaled by the lungs. 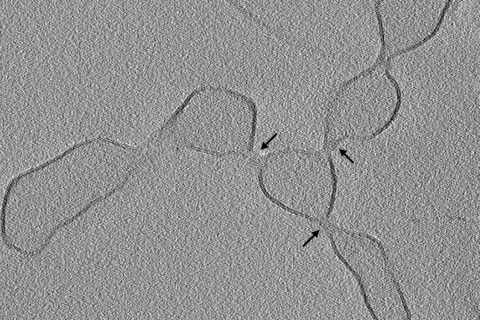 The organism was discovered nearly 30 years ago by Kenneth Nealson, now holder of the Wrigley Chair in Environmental Studies and professor of Earth sciences and biological sciences at the USC Dornsife College of Letters, Arts and Sciences. Scientists have more recently been interested in learning exactly how the bacteria pull off such an exceptional biological trick.

El-Naggar, associate professor of physics, biological sciences, and chemistry at USC Dornsife, and a collaborative team from USC and Caltech think they have the answer. Their paper published on March 22 by the Proceedings of the National Academy of Sciences highlights research that offers a new understanding of how these bacteria may use “nanowires” to accomplish the electronic feat.

Harnessing energy from living, organic sources holds tremendous potential as a new sustainable energy solution. A microbial fuel cell, for example, could generate electricity by capturing electrons from the bacteria on electrodes instead of the rocks that these organisms evolved to breathe.

Microbes are highly evolved machines. And what we have here is a class that is really good at converting energy and interacting with the abiotic world.

“Microbes are highly evolved machines,” El-Naggar said. “And what we have here is a class that is really good at converting energy and interacting with the abiotic world.”

Another advantage to using “electric bacteria” is already being explored at USC — wastewater treatment. Microbes feed on the waste, oxidizing the organic substances and producing a small amount of electricity.

Aside from myriad practical applications, these organisms could exemplify the kinds of life that exist in environments where little or no oxygen exists, such as the deep ocean or under the Martian surface.

Depositing electrons outside the cell is how they survive, said El-Naggar, who holds the Robert D. Beyer Early Career Chair in Natural Sciences. “If one were to shut down the ability to transfer the electron out of their system, they would not be able to make energy. The bacteria would basically suffocate.”

Under the microscope, scientists can see what appear to be filaments projecting from these cells. For years, the prevailing hypothesis was that these were a form of tiny hairs called pili, similar to those found on other types of bacteria.

But in 2013, a research scientist in El-Naggar’s laboratory, Sahand Pirbadian, discovered that these projections, referred to as “nanowires,” were actually extensions of the cell membrane covered in cytochromes — proteins containing iron that facilitate electron transport. These nanowires allow the bacteria to connect with surfaces much further away than one would expect.

Through light microscopy imaging, the team had an idea of the nanowires’ basic composition. But they were curious as to whether the cytochromes were close enough together to transport electrons along the wire. If the density were high enough, they thought a bridge could form along the membrane that would allow an electron to cross onto external surfaces.

Insane in the membrane

For the current study, El-Naggar and Pirbadian collaborated with Grant Jensen and Poorna Subramanian at Caltech, experts in the use of electron cryotomography, or ECT.

Using ECT, researchers can instantly freeze cells, preserving them in a form that is extremely close to their natural state, and then image them with nanoscale resolution in three dimensions.

Subramanian and Pirbadian were able to capture lifelike images of the bacteria and their nanowires. What they found was intriguing.

“These are not simple tubes,” El-Naggar said. “They turned out to be more like a chain of membrane pearls, strung together.”

With the images produced by ECT, the team was the first to see how electron transport proteins were distributed in the membrane to form the nanowires. While some were touching each other, many were further apart — up to 30 nanometers — a range too far for an electron to jump.

With this new information, the team proposed that the proteins float within the membrane. This creates just enough collisions to allow electrons to exchange from one to the next until they reach the end of the nanowire and transfer to the rock or metal surface.

Their next step is to confirm these collisions are, in fact, happening.

While there is much that remains to be learned, El-Naggar is excited about where the research might lead and the possibility of a sustainable energy solution from living sources.

“My lab is driven by the idea that we could develop new machines, where living cells are functioning as part of a hybrid biotic-abiotic system,” he said. “We are trying to build the foundations of a new generation of living electronics.”

Work in the USC Loker Hydrocarbon Research Institute may solve one of the world’s biggest challenges — the clean generation and storage of renewable energy.

Where others see worthless elements, this professor sees potential sources of energy

USC expert in metallurgy takes simple, seemingly useless elements to make functional materials out of them.