Gloria Cheng is sitting in a back room at Chrysalis, a homeless organization off L.A.’s Skid Row. She has a resume pulled up on the computer screen in front of her.

“So what type of job specifically are you looking for?” Cheng asked.

Right now, he works a few jobs, mostly as a security guard. You might’ve seen him at the America’s Got Talent auditions in Pasadena or at Rams or Trojan football games at the the Los Angeles Memorial Coliseum.

He’d like a steady gig. He likes driving, he said. 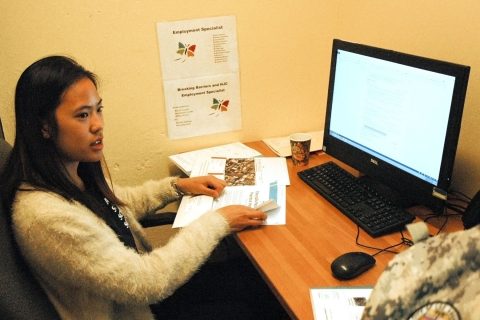 Gloria Cheng gets real-world experience interfacing with people that she might help in her career later on. (USC Photo/Joanna Clay)

For the last couple of weeks, Cheng, 19, has been coming to Chrysalis to help with job-training services — editing resumes and doing practice interviews.

She’s participating in a new homeless initiative of the USC Joint Educational Project, which aims to connect USC’s student body with volunteer opportunities with homeless populations. It’s part of USC’s greater commitment to reducing and alleviating homelessness in Los Angeles County, where roughly 58,000 people experience homelessness on a given night, according to LAHSA.

“Chrysalis seemed like a very unique program to me because it specifically targeted job retention … which seems like a sustainable long-term solution for a problem that sometimes seems like it has no solution,” said Cheng, a sophomore majoring in health and human sciences.

USC students show interest in working in the community but sometimes don’t know how to go about it, said Brenda Wiewel, director of the university’s Initiative to Eliminate Homelessness. The JEP program can help connect those dots — and it has a long history of running volunteer programs.

“That way, students get some experience working directly with people who are experiencing homelessness,” she said. “They can also come back to JEP to reflect and get lots of support. I’m happy with the results so far.”

Dennis, who grew up in the south side of Chicago, has been using the services for the last week or so. After this, he’ll do a practice interview and meet with a job coach before heading to a security gig in the afternoon.

“I’m so tired of working three to four jobs at once,” he said.

Today, he’s dressed in a crisp white button-down shirt and navy pants. He carries a camouflage backpack, where he keeps his cellphone and a handwritten schedule.

Homelessness in L.A. County, by the numbers

Increase in folks in RVs or encampments in 2017 over 2016 (excludes Glendale, Long Beach and Pasadena).

Number of homeless people between the ages of 25-54.

How many veterans experience homelessness for a given night in 2017.

How many people were placed in permanent housing in 2016, which is up over 2015 and 2014 (excludes Glendale, Long Beach and Pasadena).

How many of the chronically homeless are homeless on a given night, up from 2016.

Dennis has been out of the country, living in Asia for the last 20 years. He moved there in the late ’90s, reeling from the death of his fiancee, who was killed in a car accident. He returned in July when his uncle died and has to stay to settle his uncle’s affairs — sell his house, pay his debts. Then he’ll return to his girlfriend, who is waiting for him in the Philippines. He sends more than half his pay to help support her and her family.

He’s currently homeless, sleeping at a shelter. But he said that’s not the hardest part.

There’s also the clothes, like what he’s wearing today. It all adds up.

Having one job, versus jumping from gig to gig, would keep those costs down, he said.

Cheng beefed up Dennis’s resume, adding specific examples under jobs and skills, including software he knows and his experience in project management.

“And then I just put fluent in both Chinese and Italian,” she said.

“Yeah, that sounds like an interesting dude,” he said, with a laugh. “I want to meet that guy.”

“That’s the goal,” Cheng said, with a smile.

Dennis noted degrees from University of California, Berkeley and Arizona State University — where he studied aeronautical engineering and business — and, most recently, a degree from a Chinese university.

After the session, he tells Cheng he appreciates her help. He doesn’t know if he could give this the time and attention that she did.

Cheng sometimes feels a bit out of her league doing these sessions, she said. She’s still new to the job world herself.

But Michelle Lopez of Chrysalis said that’s not the point.

“I can train anybody on resumes and practice interviews, right?” said Lopez, the volunteer and program coordinator. “What I can’t train people is to be compassionate. I can’t train them to be supportive. That’s something that has to be within them.”

Cheng has no intention of ending her volunteer efforts when her semester program is over.

“My two hours a week spent at Chrysalis make me feel less helpless in trying to solve the immense issue that is homelessness in L.A.,” she said. “Chrysalis is a starting point for me to learn more about the issue from the people themselves, and help in a way that I know is productive.

“This is the tip of the iceberg for me.”

How many homeless are there in Los Angeles? USC helps city, county find out

Students collect critical data in the second year of the university’s partnership with the Los Angeles Homeless Services Authority.

Veteran writer uses book on L.A., homelessness and even the Gettysburg Address to inspire questions and pique curiosity.

From housing and supportive services to business and technology solutions, panelists outline framework for tackling one of society’s most intractable problems.