A part of a USC student-led initiative called Art Rx, the workshop aimed to bridge physical and emotional pain with art. Today’s was focused on scars.

Blue ink was rolled up and down her arms and transferred to paper. For the first time, Wiles saw the deep lines off of her body.

“To see them on a sheet of paper — I know it sounds overly dramatic, but it was life changing,” Wiles said, a Master of Social Work candidate at USC. “It was showing me they’re just marks. They don’t define me. But also, they’re a piece of me.”

Wiles self-harmed as a teenager. She cut herself with razors and later with glass, which cut deeper.

“I was struggling with my sexuality,” Wiles, 25, said. “I always knew that I was different and that I was gay, but I dated boys and tried to ignore it.”

The Art Rx workshop was the first time — outside of a class — she publicly talked about her self-harm, or cutting.

It opened doors for her. In the months since, she’s shared her experience with fellow students, professors and clinicians, so that they can better work with those who self-harm.

“It was incredibly powerful to witness a student and future clinician be so vulnerable,” said Sydney Siegel, a graduate student at the USC Suzanne Dworak-Peck School of Social Work. 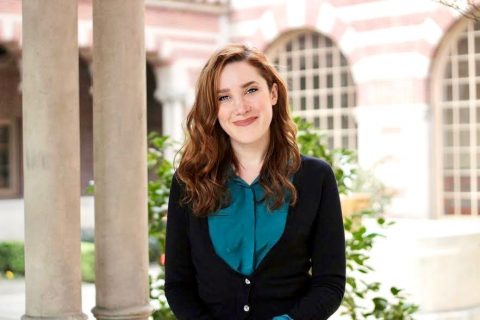 Siegel was inspired to create Art Rx while volunteering at a hospital a few years ago, when she was working in the film industry. She remembers a 16-year-old cancer patient.

“According to her parents, she used to be really talkative and expressive but once she got her diagnosis, she wouldn’t speak to a soul,” she said.

The patient had been keeping a journal, and Siegel asked if she would be interested in writing a film script.

“After the first scene, she couldn’t put her pen down,” she said. “This was a game-changer for her clinical experience.”

Siegel pitched the program to USC back before she started in her master’s program; the university’s support for it sealed the deal in becoming a Trojan. Right now, it’s a collaborative effort between the USC Suzanne Dworak-Peck School of Social Work and the Keck School of Medicine of USC, supported by a team of fellow classmates and seven Art Rx fellows, who will carry the torch when Siegel graduates in May. The fellows study medicine, occupational therapy and social work but all have creative backgrounds.

“My inbox was overflowing,” Siegel said, noting she got about 60 applications. “There’s obvious interest in this little niche.”

Faculty members serve as advisers and mentors as well.

Rosemary Alamo, a clinical associate professor of social work and Art Rx mentor, said it’s about time such an initiative existed. As a social worker, Alamo worked in Los Angeles Unified School District and in the emergency room of Children’s Hospital Los Angeles.

She remembers a kid she worked with at LAUSD. For most of the year, he hadn’t spoken. She asked him to sculpt with Play-Doh and draw. She put on music.

He drew his home life. He started talking.

Art Rx is hosting a free symposium April 7 with speakers such as TV producer Norman Lear and Susan Schneider Williams, the wife of the late actor Robin Williams, who died in 2014 after dealing with dementia.

“It was really the impact of his parents’ divorce and the violence he would see” that made him close up, she said. Because of this information, they were able to remove him from the home and protect him, she said.

Siegel says Art Rx will remain close to her heart. She plans to stay on as chief adviser.

“It’s something I’ve been so involved with — there’s no way I can step back,” she said. “It has so much momentum.”

Down the line, Siegel hopes Art Rx can form partnerships with schools of the arts, such as USC Roski School of Art and Design or the USC School of Cinematic Arts, where she earned her bachelor’s degree. She also hopes that professors will be inspired — either on the clinical side or in the arts — to think about using creative practices with health.

“If it’s a dance class, maybe they think of movement disorders or a film class around trauma and healing,” she said.

As for Wiles, she has been thinking about that print. It sits in her apartment, recently framed.

She hasn’t decided where she’s going to put it, yet.

“It’s almost hard to point into words,” she said. “It’s taken a long time to see my scars as survival battle marks … as empowerment.”

Valedictorian Tianna Shaw-Wakeman: ‘Fight for a world where future generations won’t have to keep making the same kinds of choices that we do’

USC’s 2021 valedictorian addresses the classes of 2020 and 2021 at the university’s commencement ceremonies.

Valedictorian Isabella Hauptman: ‘The notion of going backwards, to what was, seems a bit misguided’

USC’s 2020 valedictorian addresses the classes of 2020 and 2021 at the university’s commencement ceremonies.

New grads are just the latest members of this Trojan Family

Growing up in a family full of USC alumni, Parker and Sierra Alban knew they’d wind up graduating as Trojans.

The Trojans are dominant in their 18-9 win over UCLA — the most goals and largest margin of victory ever in an NCAA women’s water polo championship game.

As a consultant and writer on the TV show United States of Al, Chase Millsap is bringing the topic of special immigrant visas to millions of Americans.