She helped give women confidence that they could speak up about sexual harassment no matter how powerful the perpetrators. Now, Gretchen Carlson wants to see the anti-harassment movement that has taken hold in the entertainment and media industries spread to people in everyday jobs.

The former Fox News anchor and best-selling author of Be Fierce discussed the cultural revolution that followed her sexual harassment lawsuit that led to the resignation of Fox News CEO Roger Ailes. As the 2018 speaker at the Holt Lecture hosted by the USC Price School of Public Policy and its Bedrosian Center on Governance, Carlson also shared the work she is doing on Capitol Hill to make it easier for women to come forward.

“My greatest hope is that this will trickle down to the everywoman, because they are the stories that really need to be told,” Carlson said. “The waitress, the teacher, the lawyer, the accountant, the members of our military; I’ve heard from oil-rig operators, police officers, firefighters. It’s everywhere. It’s a pervasive epidemic, so we’re just getting started on the #MeToo movement.”

USC Price Professor Lisa Schweitzer led an hourlong conversation with Carlson on March 21 at the Town and Gown ballroom on the USC University Park Campus.

Being fierce for ‘my kids and yours’

Carlson said she was sexually harassed and assaulted multiple times over her 25-year career as a journalist but never spoke up, thinking that if she worked hard, she could make it go away or get past it. When she felt that she was losing her job as a result of declining Ailes’ advances, she couldn’t stay quiet any longer. 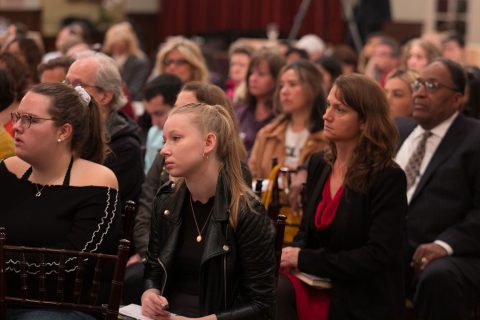 “I did it for my children and your children, because we thought we had this handled in our generation, but we didn’t,” Carlson said, “and I want to make sure that we handle it for my kids and yours.”

After her lawsuit was filed, in July 2016, The New York Times reported that another six women had accused Ailes of sexual misconduct. Seeing an industry titan fall opened the door for women to come forward against powerful men in entertainment and media.

“That we’re seeing this unfold so quickly, with so many major changes, in just 20 months since my story broke is just unbelievable,” Carlson said. “Now, women are actually being believed for the most part. That’s one of the reasons I think time can’t be turned back on it. We can only continue to move forward.”

Carlson is attempting to move the conversation forward in her new role as chairwoman of the Miss America Pageant’s board of directors — she was Miss America in 1989 — and a proponent for the Ending Forced Arbitration of Sexual Harassment Act of 2017.

The bill, introduced jointly in the House and Senate by a bipartisan group of lawmakers in December, would void the mandatory arbitration clauses that 60 million Americans have in their employment contracts; the legislative change would allow employees the choice of taking their grievances to an open court. She is optimistic the bill will pass this spring.

“Hypothetically, a woman getting sexually harassed on the job complains to HR, and they immediately get thrown into arbitration,” Carlson explained. “It goes into a secret chamber, many times the company picks your arbitrators for you, and the employee only wins 20 percent of the time, with no appeals. Then, the woman is promptly fired for being a troublemaker, and now she can never tell anyone what happened to her.”

Carlson questions whether a human resources office is the right place for employees to report sexual harassment, given there might be an inherent conflict of interest with regard to who is signing the paychecks. In her book, she advocates for companies to create a safer environment for people to come forward by hiring an ombudsman, or outside contractor, so that people will feel comfortable that an independent investigation is going to occur.

Wouldn’t it be amazing and fabulous if every leader of every organization in the country says the buck stops with me, and this behavior is not acceptable, and if you are a witness to this or a victim of this, you would be celebrated if you came forward?.

“Wouldn’t it be amazing and fabulous if every leader of every organization in the country says the buck stops with me, and this behavior is not acceptable, and if you are a witness to this or a victim of this, you would be celebrated if you came forward?” Carlson said. “Imagine how that changes the dynamic. When you don’t have that, and the harasser happens to be near the top of the organization, then everyone else falls in line and becomes an enabler, and it becomes the norm of that corporate culture.

“If you stop it from the top down, it sends a huge message to everyone that it’s not acceptable.”

The all-day summit attracts entertainers, executives and Olympians who inspire, advise and connect with USC undergrads.