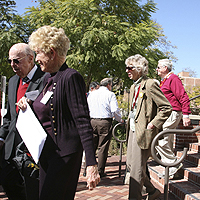 The Half Century Trojans had a busy schedule throughout the day.

It’s never too late to go back to school.

By definition, the Half Century Trojans include all USC alumni, no matter their degrees, who earned a bachelor’s from any university at least 50 years ago.

Sponsored and hosted by the USC Alumni Association in partnership with select USC schools and divisions, Going Back to College Day provided an opportunity for the Half Century Trojans to return to campus on a regular school day to rekindle their own memories of student life at USC.

There was one additional rationale for this event � a desire to connect with Half Century Trojans during a typical school day outside of football season. Since Reunion Weekend takes place in the fall, football is a major part of it. Going Back to College Day gives the university an opportunity to honor its most senior alumni in a different, non-football context.

Since that time, the Half Century Trojans traditionally has included emeritus faculty members and retired USC administrative personnel. Today it is estimated that there are upward of 20,000 Half Century Trojans � about one-fifteenth of USC’s total living alumni population of approximately 300,000.

For this inaugural Back to College Day, the weather was picture perfect as guests arrived at the Widney Alumni House before noon to sign in and socialize before heading off to lunches hosted by the respective deans of the USC schools they attended.

Participants with degrees from schools whose deans were not hosting a lunch attended an interdisciplinary gathering at the USC Emeriti Center. During the various lunches, the deans paid tribute to their guests � custodians of USC tradition � as part of one of the most important branches of the Trojan Family tree, and they provided updates on the latest trends in faculty research and student activities in their respective schools and disciplines.

After lunch, the young-at-heart crowd enjoyed one of three activities � a campus tour, a curatorial walkthrough of two exhibitions at Doheny Memorial Library with USC Libraries Dean Catherine Quinlan and a tour of the new School of Cinematic Arts complex that opened this winter.

After the tours, it was literally back-to-school day, when the Half Century Trojans attended one of three classroom lectures organized by the USC Emeriti College. The lectures, presented by current and former USC faculty members, covered topics in multiple disciplines: political science (“The Genius of Our Constitution”), fine arts (“Jazz in the Swing Era”) and science/health (“The Status of Health Care in Los Angeles”).

After their busy day at school, the Half Century Trojans were treated to a dinner sponsored by University Advancement at the Davidson Conference Center. There they were addressed by USC President Steven B. Sample who characterized the Half Century Trojans as “a link between our present and our past, an enduring symbol of the lasting bond among all members of the USC community.

“This university,” he continued, “has benefited greatly from their efforts, their experience and their judgment, and I’m very grateful for all of their contributions.” Next came a presentation by Martha Harris, senior vice president for University Relations, covering, appropriately enough, the changes USC has undergone in the last half century.

To cap things off, at least for those Half Century Trojans who needed their fix of USC sports, the Alumni Association reserved a special section of the Galen Center for those wishing to attend that evening’s men’s basketball game in which USC defeated Washington State.

Back to School for the Young at Heart