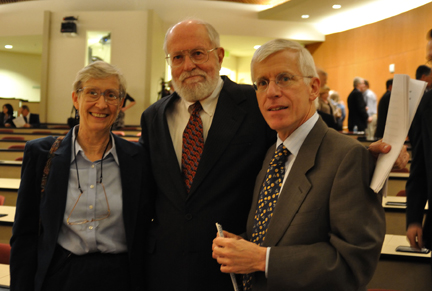 The event, held at the Harlyne Norris Cancer Research Tower’s Aresty Auditorium, presented the highlights of Peters’ long career and featured presentations by several of Peters’ colleagues from USC and other institutions, including Harvard, Brigham Young University and the University of Massachusetts, Lowell.

Jon Samet, professor and Flora L. Thornton Chair of the Department of Preventive Medicine, said that throughout Peters’ career, “He has remained quietly—perhaps too quietly—in the background, as work that he started led to major findings and supported the development of young researchers.

“Some of these accomplishments include the first research on smoking and the health of young adults—his doctoral dissertation, findings in pioneering studies of occupational lung disease in firefighters, granite workers and rubber workers, studies of leukemia and environment, and of course, the Children’s Health Study,” Samet said.

The Children’s Health Study is a longitudinal study of respiratory health among children in 12 Southern California communities.

Keck School Dean Carmen A. Puliafito thanked Peters for his leadership and commitment to the school.

“It was a real privilege and pleasure to meet John Peters and have him be one of the first folks I met here,” he said.

Puliafito also announced the formation of the John Peters Environmental Education Research Fund, which will help to continue Peters’ work by supporting students and postdoctoral candidates researching environmental health. Persons interested in making a donation to the fund may contact Kavita Munjal at (323) 442-2358.)

Penny Newman, executive director for the Center for Community Action and Environmental Justice (CCAEJ), a Riverside, Calif.-based nonprofit organization working on environmental justice issues, hailed Peters and his colleagues for their work with community groups.

“Certainly we have seen the scientific research that John Peters has been involved in, and that is well documented,” said Newman. “But what isn’t documented are the thousands of human lives that he has helped make better.”

Peters closed the event by acknowledging the work of many of his colleagues and his confidence in the future of the Department of Preventive Medicine. “I am happy to see at the end of my academic career that the university cares about the medical school, and has appointed a strong dean, and one who cares about the Department of Preventive Medicine. Proving it, Carmen has recruited the best new department head in the world, longtime friend and colleague, Jon Samet,” said Peters. “I believe you are poised, with Jon and assembled colleagues, to stay number one indefinitely.”