Lung cancer survivor Deborah Mosby doesn’t get to see radiologist Christopher Lee much these days. But when the two get together, it’s a happy reunion.

“I saw Dr. Lee not long ago,” Mosby said. “He wanted to see how I was doing. He’s a good doctor. He’s the one who found the cancer, and he found it early. If I’d have kept waiting, it could have turned out badly. I’m glad I got that test.”

Lee and Mosby met just over two years ago at Keck Hospital of USC, where Mosby underwent a free lung cancer screening. Funded by a grant from the California Community Foundation, the low-dose CT scans were offered to underserved residents of South Los Angeles and nearby communities. Mosby was taking part in a smoking cessation program at the Watts Health Center when she was referred to Keck Radiology for a free scan. At the time, she displayed no lung cancer symptoms.

They picked me up in an Uber and took me to USC. They made it easy for me.

“They picked me up in an Uber and took me to USC,” Mosby said. “They made it easy for me.”

The scan, which takes less than five minutes, led to a diagnosis of small cell lung cancer for Mosby.

“Deborah’s lung cancer screening CT found a cancer in her right lung with spread to some of the lymph nodes in her chest,” said Lee, associate professor of clinical radiology at the Keck School of Medicine of USC. “Though this is not as early as I would have hoped to catch her cancer, it was still early enough for treatment, as the cancer had not spread to any other areas. Small cell lung cancer is typically a pretty aggressive type of lung cancer, which is why we were so relieved to catch it when we did.”

Mosby received chemotherapy and radiation treatments shortly after diagnosis. When follow-up examinations showed a risk of metastasis to the brain, prophylactic cranial irradiation was recommended. 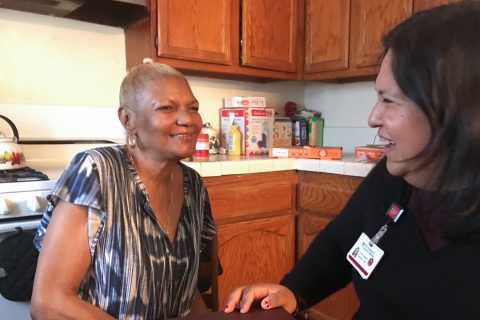 An uncertain Mosby turned to Ghecemy Lopez, a navigation specialist at the Ronnie Lippin Cancer Support and Navigation Program at the USC Norris Comprehensive Cancer Center. The program is free to Mosby and other underserved individuals who live near USC or the Health Sciences Campus.

“Ghecemy was a cancer survivor, so we were compatible,” Mosby said. “I saw how she was doing better and thought I could do the same. She helped me [with] an exercise plan, a lot of things.”

“I understood how Deborah felt,” Lopez said. “So I helped her get her records together, and got her in to see one of our oncologists here at Norris. After her evaluation, she felt better. She was on the right track.”

“Ghecemy went with me to all my appointments,” Mosby said. “She was good to me, and it was helpful. She still visits, and she calls to check on me all the time.”

The program that caught Mosby’s lung cancer has screened about 400 at-risk people in and around South Los Angeles. Many were provided free transportation to Keck USC’s imaging center.

Clinical trials have shown screenings could reduce lung cancer mortality rates by at least 20 percent. Lee hopes a renewed grant will allow Keck Radiology to restart the program, this time targeting even more underserved individuals, while continuing to educate the community regarding the importance of screening and smoking cessation.

“We want to help a high-risk population and eliminate any socioeconomic barriers to receiving this potentially life-saving technology,” Lee said. “The community has responded very well to this program.”

Mosby, 65, is feeling well enough to look after her grandchildren. She operates a soul food catering service, but she’s put business on the back burner to focus on health.

“I’ve been declared cancer-free,” Mosby said. “I just go in for follow-ups, blood work-ups, things like that, every few months. Things are getting better.”