When Reem Itani learned she had a brain tumor, she was distraught — but not for the obvious reason. Her endocrinologist told her the tumor was “MRI-negative,” meaning it didn’t appear on a brain scan, a concept unfamiliar to Itani even after years in medical school and residency.

“I just started crying,” said the 28-year-old pediatrics resident from Chicago. “You never hear about an MRI-negative tumor in med school.”

Hoping for a better explanation, Itani sought the counsel of her former professor Gabriel Zada, a neurosurgeon and associate professor of neurosurgery at the Keck School of Medicine of USC, where she received her MD in 2015. When Itani returned to Los Angeles during a break from residency, Zada and his colleague John Carmichael of the USC Pituitary Center officially diagnosed her with Cushing’s disease. The condition is caused by a pituitary microadenoma, or very small tumor, which results in chronically elevated cortisol. 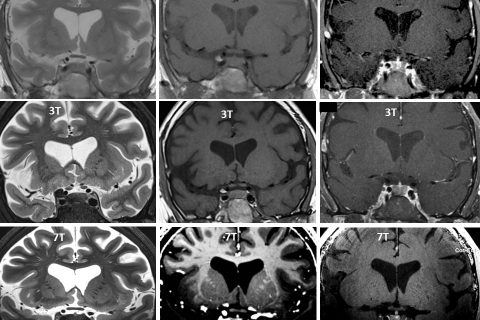 At 1.5T and 3T, Itani’s pituitary gland looks normal. At 7T, a low signal on the right side indicates the presence of a tumor. (Image/Courtesy of Meng Law and Gabriel Zada)

Zada and Carmichael sought the assistance of Meng Law, director of neuroradiology and professor of neurology at the Mark and Mary Stevens Neuroimaging and Informatics Institute (INI); they too weren’t satisfied with the MRI-negative tumor. They decided to test out the INI’s new ultrahigh field 7 Tesla Magnetic Resonance Imaging scanner — which uses a more powerful magnet to produce clearer images than standard scanners — on Itani, and were able to successfully image and localize her tumor with the scan.

“This is the first time a 7T has been used to scan a Cushing’s patient in the U.S., and we’re very excited about the results,” Law said. “The new technology has the potential to replace the standard method of diagnosis, which is much more invasive.”

Itani’s case was published in the Journal of Neurosurgery on March 23, providing an early example of how the INI’s new high-resolution scanner can help ease patient suffering and even save lives.

“It’s clear that this is the beginning of a new frontier for ultrahigh field MR technologies,” said Arthur Toga, director of the INI. “The enhanced image quality opens many doors for neuroscientists in both research and clinical settings.” 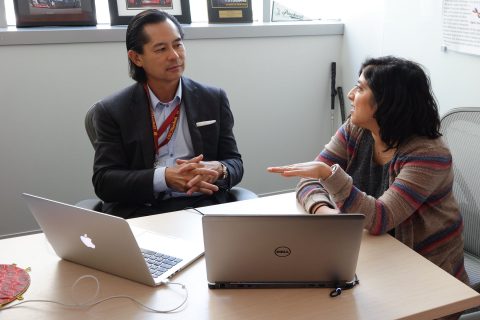 Reem Itani, right, a medical resident and USC alumna, speaks with Meng Law, director of neuroradiology at the Keck School of Medicine of USC. (Photo/James Stanis)

When Itani sought treatment for hair loss, weight gain and irregular menstruation, several doctors misdiagnosed her before an endocrinologist caught the hallmark sign of Cushing’s disease: elevated cortisol. The doctor ordered an MRI scan, hoping to confirm the diagnosis by identifying a tumor in Itani’s pituitary gland. Though the 1.5T scanner revealed no abnormalities in Itani’s brain, the doctor still believed she had a tumor.

Between 30 and 40 percent of Cushing’s patients experience the same frustrating conundrum — their tumors are too small to register on a standard MRI scanner. That means they won’t receive an official diagnosis without completing yet another procedure: inferior petrosal sinus sampling (IPSS).

During IPSS, a surgeon threads a catheter from the patient’s groin up to the petrosal sinuses, veins that drain the pituitary glands, to measure hormone levels. The procedure is invasive and risky — possible complications include stroke, clots and bleeding.

On top of the risks, IPSS offers limited spatial localization: It merely predicts whether the tumor is in the left or right hemisphere of the pituitary gland, and only does so with 80 percent accuracy.

“These tumors are typically 2 to 3 millimeters in diameter, while the pituitary gland is several cubic centimeters in volume,” Zada said. “When surgeons go in to remove the tumor, we often have very little information about its specific location from the IPSS report.”

This can be problematic, he said, because many important structures surround the pituitary gland, including the basilar and carotid arteries. Missing the tumor could also lead to pituitary failure or other surgical complications such as cerebrospinal fluid leakage, which can cause meningitis.

“The 7T may save patients an invasive procedure, and makes my job easier because it lets me know exactly where the tumor is in the gland. We can be very selective about just removing the tumor and not damaging the rest of the gland,” Zada said.

Since her surgery in July, Itani has made a remarkable recovery. Her cortisol levels are normal, her hair is growing back and she feels great.

As she gears up for her third year in residency, she plans to relay the experience to her colleagues during their annual case report exercise. Itani has identified two major takeaways: a medical lesson and a personal one, which is already changing the way she interacts with her pediatric patients.

“I had never really been a patient before,” Itani said. “So now, when you’re on the other side of things, you start to have even more sympathy for people who are struggling with life-threatening health conditions.

“You realize just how scary it is,” she said.

The machine — the only one of its kind in North America — will allow scientists to advance research on Alzheimer’s, autism and more.

Brown fat is increasingly drawing the interest of medical researchers who study metabolic and endocrine issues.

Researchers in a multiyear study are using magnetic resonance imaging to understand the long-term effect of statins drugs on arterial blockages.