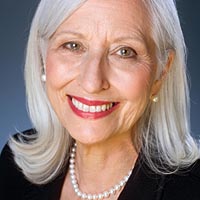 Florence Clark rose to her current position with the Division of Occupational Science and Occupational Therapy in 2006.

Clark will serve in that role for the first year of her four-year term and assume the presidency next spring.

Clark, who has served in various capacities on the association’s board for the past six years, will spend her year as president-elect being mentored in her new role by current president Penelope Moyers-Cleveland.

As president of association, Clark will lead the board in setting strategic directions, including preparing the organization and its members for implementation of its “Centennial Vision,” a mission statement devised to recognize that both the association and the profession will celebrate their 100th anniversary in 2017.

“I am very grateful to the membership for having elected me to this position,” Clark said. “This is a time of opportunity for occupational therapy as the profession moves forward in response to the national health care reform agenda. My hope is to ensure that what occupational therapy has to offer to meet societal needs is communicated in the arenas where national policy decisions are made.”

A widely published scholar with research interests ranging from the development of sensory integration in children to recovery from spinal cord injury, Clark was appointed a charter member of the Academy of Research of the American Occupational Therapy Association and has served as special consultant to the U.S. Army Surgeon General.

In 1999, she was honored with an award of merit from the association, and in 2001, she received a lifetime achievement award from the Occupational Therapy Association of California.

Clark earned her Ph.D. in education from USC, where she was appointed an assistant professor of occupational science and occupational therapy in 1976. She rose to her current position when the Division of Occupational Science and Occupational Therapy was incorporated into the School of Dentistry in 2006.

In 2004, Clark received USC’s Presidential Medallion, the highest honor for academicians who have brought honor and distinction to the university.

Barbour was elected secretary of the group, and Hayes was elected communications and advocacy chair.