The Keck School of Medicine of USC’s newest generation of doctors learned where they will begin the next chapter of their careers as residents during their much-anticipated Match Day celebrations today.

Nearly 160 future physicians gathered on Harry and Celesta Pappas Quad on the Health Sciences Campus to rip open the envelopes containing details about where they will spend their upcoming residencies. Coordinated by the National Resident Matching Program, graduating medical students from the United States and Canada learn their residency results simultaneously. Each applicant may apply for multiple residency programs, but they don’t find out until Match Day where they will spend the next several years honing the skills and knowledge they’ve accumulated.

The brief but emotionally charged ceremony concluded with a champagne toast before the envelopes were distributed, in keeping with tradition. And the envelopes themselves were delivered by USC’s famous equine mascot, Traveler.

“I know you’re all going to be pleased and we couldn’t be more proud of your accomplishments. Cheers,” said Henri Ford, vice dean for medical education, as he raised a glass to the graduating class.

“As a school, we feel you’ve done exceptionally well and you should all be very proud,” she said.

Cesar Gonzalez was elated to find out he would be starting his journey in internal medicine at Los Angeles County + USC Medical Center.

“I’m feeling very excited. I can’t even put it into words,” he said. “It’s amazing. I’m still kind of shaking. I can’t believe it.”

“The last four years have blown by so fast,” Gonzalez said. “This is something that we’ve been looking forward to for four years. It’s surreal that it’s actually here.” 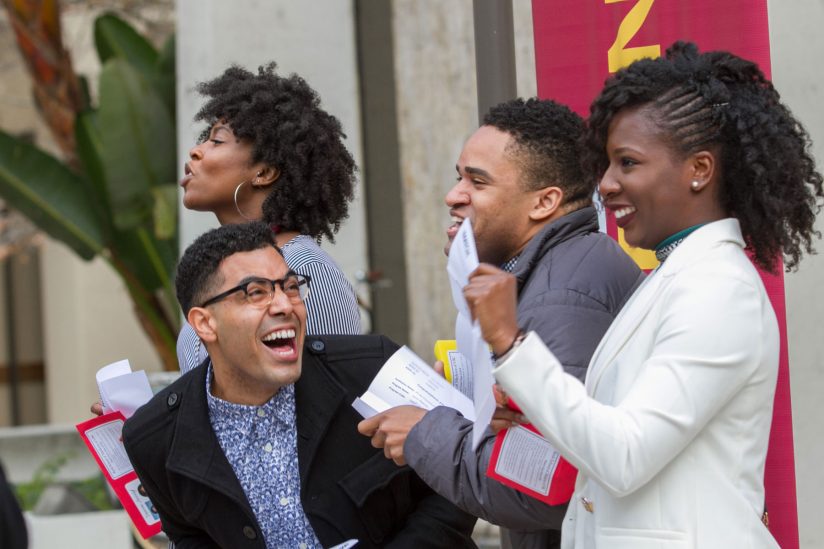 Students celebrate as they open their residency results. (Photo/George Martinez)

Gonzalez first became fascinated with medicine after routinely translating for Spanish-speaking family members during doctor visits. His determination to become a physician was solidified after he witnessed his mother undergo successful treatment for breast cancer.

“The doctors were amazing,” he said. Following the experience, “there was no way I could go into anything but medicine.”

Vanessa Ramirez is bound for Sutter Santa Rosa Regional Hospital in Santa Rosa, where she will train in family medicine. She said she applied to programs where she believed she could have a positive impact on the community.

Ramirez also said she first developed an interest in medicine after translating for family during doctor visits as a child.

Brandon Pang could be heard yelling with joy upon opening his envelope and learning he had been accepted for an internal medicine residency at the University of Michigan.

The last eight years of my life have been leading to this moment.

“The last eight years of my life have been leading to this moment,” he said, as friends and loved ones lined up to hug and congratulate him.

Pang said his longtime girlfriend is already a doctor there. “We will finally be in the same time zone,” he exclaimed with a grin.

Seven members of the graduating class were early matches, with three in urology and four in ophthalmology, according to Restifo.

“Sixty-three percent of you will be training in California,” she said to applause. Twenty-four percent will complete all or part of their training at LAC+USC.

Restifo said 58 members of the class will be headed out of state for at least a portion of their training, with New York garnering the largest share at 14.

Internal medicine was the most popular specialty with 36 residencies, followed by 25 in emergency medicine, 12 in family medicine, 11 each in pediatrics and general surgery, nine in obstetrics and gynecology, and seven in anesthesiology.

Interim Dean Laura Mosqueda said although the students are getting ready to leave campus, they will always have a place at the Keck School of Medicine.

“What you’ll find, whether you talk to someone who graduated one year ago or 50 years ago, is how well prepared they were to move on to internship, residency and their careers,” Mosqueda said. And as alumni, the new doctors will “always have a home to come back to when they’re finished with their training, and that home is both a physical home and the emotional home that we have here for all of you.”

Veronica Ramirez peeled back the envelope in her hand and learned what her fate would be for the next several years.

The weather was gloomy, but the atmosphere was electric for Match Day 2012 at the Harry and Celesta Pappas Quad on March 16, as 167 Keck School of Medicine of USC seniors learned where their journeys into the wide world of medicine would begin.