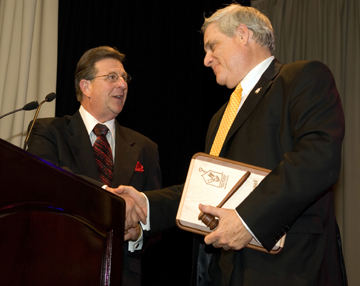 Ronald McDonald House Charities of Southern California has honored Stuart E. Siegel for more than 30 years of leadership as president of the organization’s board of directors.

Siegel is professor and head of the division of hematology-oncology in the Department of Pediatrics at the Keck School of Medicine and associate director for pediatric oncology in the USC Norris Comprehensive Cancer Center, and director of the Childrens Center for Cancer and Blood Diseases at Childrens Hospital Los Angeles. He was guest of honor at a toast and roast Feb. 27 at the Beverly Hilton Hotel.

Siegel’s “life’s work has been to put an end to the death and suffering caused by childhood cancer,” said Nicole Rubin, CEO of Ronald McDonald House Charities of Southern California, in the event program. In addition to publishing more than 200 scientific articles and presenting more than 400 papers at medical and scientific meetings, “Dr. Siegel understood the critical need for housing and support services for families, particularly those driving long distances to ensure the best medical care for their children. He appreciated the devastating effects of childhood cancer such as developmental delays and diminished self-esteem and wanted to ensure programs were developed to address these broadly defined needs.”

He helped found the predecessor of today’s Southern California Chapter of Ronald McDonald House Charities. His leadership was instrumental in founding Camp Ronald McDonald for Good Times and houses in Los Angeles, Orange County, Loma Linda and Pasadena. Additional houses are under development.

“Stuart Siegel’s work with Ronald McDonald House Charities exemplifies his compassion for the children and the families who benefit from his medical expertise,” said Peter Jones, director of the USC Norris Comprehensive Cancer Center, which was a sponsor of the event. “We are honored to join in the salute to our colleague.”

Among those attending to honor Siegel were Roberta Williams, professor and chair of pediatrics at the Keck School and vice president of pediatrics and academic affairs at Childrens Hospital Los Angeles; Richard Cordova, president and CEO of Childrens Hospital; Bill Loadvine, senior executive director of development for the Keck School; and Tina Pakfar, executive director of development for USC Norris.