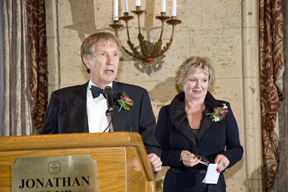 Clive and Susan Taylor, appearing above at a March 7 Salerni Collegium dinner, began their association with the Keck School in 1975, when Clive Taylor began a fellowship in cancer research.Photo/Don Milici

Two couples who have been devoted to the Keck School of Medicine of USC for many years were honored March 7 at a dinner recognizing Keck School student scholars.

At the Annual Scholarship Dinner at the Jonathan Club, Salerni Collegium and Medical Faculty Wives and Friends (MFWF) honored Cynthia and Thomas Berne and Susan and Clive Taylor, and announced this year’s scholarship recipients.

“We attract unbelievable students,” said Keck School Dean Carmen A. Puliafito. He said that the scholarship funds donated by the two organizations are especially important in competing for students against other top medical schools.

Henri Ford, vice dean for medical education, introduced 18 medical scholarship recipients. The surprise award, the $10,000 Salerni Past President Scholarship, went to Neil Parikh. Each of the other recipients received $5,000.

Cynthia and Tom Berne have been affiliated with the Keck School of Medicine through Tom Berne’s student and residency years and almost 40 years of faculty service. A professor in the division of trauma surgery and critical care, he has served as president of several surgical associations. A long-time member of MFWF, Cynthia Berne is currently co-president and has worked with CARES, the LAC+USC Medical Center Auxiliary, which runs child care centers for patients. One of the Bernes’ three children is also a Keck alumnus.

Susan and Clive Taylor began their association with the Keck School in 1975, when Clive Taylor began a fellowship in cancer research. He has served as chair of the Department of Pathology for 25 years and has been senior associate dean for educational affairs for 10 years. He is editor-in-chief of the pathology journal Applied Immunohistochemistry and Molecular Morphology, for which Sue Taylor is managing editor.

A former co-president of MFWF, she is on the board of the USC Norris Cancer Center Auxiliary, and she volunteers in the Norris pre-surgery department. All four of the Taylor children are alumni of the Keck School.

About 175 Keck School faculty, students, alumni and supporters attended the dinner, which featured a live auction including a one-week stay in an ocean-front condo in Hawaii. Thanks to the generosity of the many underwriters and patrons of the event, approximately $85,000 was raised to fund programs that financially, academically and professionally assist Keck School medical students.