The words of ancient Greek playwrights and philosophers may be nearly 2,500 years old, but they still carry great weight and wisdom.

That’s the message USC President C. L. Max Nikias imparts to freshmen and sophomores enrolled in “The Culture of the Athenian Democracy.” The special course challenges students to ponder today’s vexing questions about personal responsibility, leadership and morality through the lens of the past.

“I hope to spark a fire in their minds about the importance of the humanities,” Nikias said. “It doesn’t matter what your major is – these works contain very important messages about life, how you conduct yourself and how you relate to other human beings. These are very valuable lessons for any discipline and any society.” 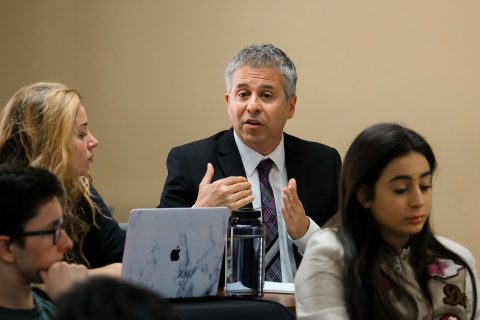 Nikias tapped Robin Romans, associate vice provost for academic affairs, as his co-instructor. Each week, they trade off discussing the tragedies of Sophocles and the philosophical musings of Plato.

Even thousands of years ago, the Greeks grappled with issues like dissent, free speech and separation of church and state. Their classical works represent not only the origins of democracy, but also timeless values.

“Reading these texts broadens your capacity for empathy,” Romans said. “You begin to view things with greater historical perspective and from multiple vantage points, which prompts you to rethink your assumptions about reality.”

The drama in ancient texts can be intense

First- and second-year students from across the university vied for one of 40 slots in the course. Applicants had to write short essays describing their interest in the class and prior experience with classical literature.

Self-described “classics groupie” Natasha Arora, a sophomore pursuing a double major in theater and English, made the cut. She had already taken several courses in the Department of Classics at the USC Dornsife School of Letters, Arts and Sciences. 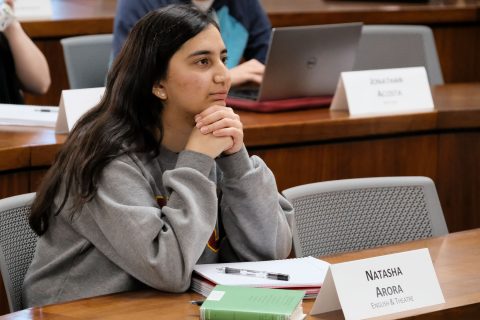 The classics are far from boring, says Natasha Arora, who is a double major in theater and English. She finds the classics riveting in their intensity and drama. (USC Photo/Gus Ruelas)

The drama in ancient texts is “so intense, it’s so extreme – and a lot of the values or ideals are not hard to connect with,” she said. “People always think that the classics are so dusty, that they are going to be boring or hard to relate to. But when you actually start reading, it’s not that way at all.”

It was a little intimidating at first to take a class taught by USC’s president and a top administrator, she said, but Nikias and Romans quickly dispelled nervousness by encouraging students to share their thoughts. They embrace interruptions and prompt discussions by posing open-ended questions.

“They are both really geared toward helping us appreciate and understand the connection between us and the ancient Greek world,” Arora said. “They are almost aggressively passionate about making sure we enjoy the experience above all else.”

Freshman Allison Westley, who plans to study biomedical engineering and finance or entrepreneurship, echoed those sentiments. She described Nikias and Romans as approachable and open to new ideas. “They are living out the mission of the USC faculty to really engage with students and get us talking and discussing things both inside and outside of the classroom.”

Unique insight from a native speaker 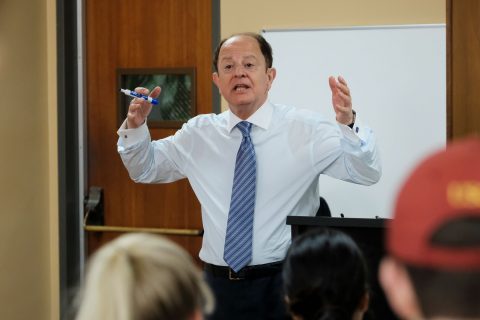 One recent afternoon, students debated the themes of hubris, sacrifice and fate in the classic play Oedipus the King. As they read passages aloud, Nikias suddenly halted the class and pointed out a nuance in the original Greek phrasing. Later, he paused to read a few lines in Greek to show the natural rhythm of the text, a cadence lost in the English version. It’s one benefit of having a native speaker as an instructor.

“I love that President Nikias knows Greek,” Westley said. “He can give us his perspective on the translation, which might not necessarily be the same as the book.”

He has explained the names of characters, she said, such as noting that Antigone, a figure who famously challenged authority, can be translated as “born to oppose.” During discussions of Plato’s Symposium, Nikias described three different Greek words for “love,” each with its own subtle meaning.

“Things might slip through the cracks during the translation or there might be a cultural connotation that we aren’t aware of,” Arora said. “He is very helpful in bridging that gap.”

Finding similarities between past and present

Nikias and Romans also encourage their students to apply lessons they learn in class to current society. They have tasked the class with identifying modern figures similar to those immortalized in the plays of Sophocles.

Nikias argues that his favorite Sophoclean tragedy, Antigone, is more relevant than ever. Although Athens represented the first democracy, he notes, its society was dominated by men. 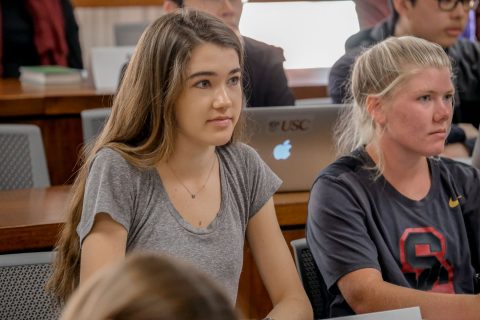 “And yet Sophocles chooses his hero to be a young woman who stands up to authority, not a young man,” he said. “Antigone defies the king and stands on her moral principles.”

The instructors have prompted students to draw connections to modern times, such as the fight for women’s right to vote and the fact that the United States has never elected a female president. Westley, for one, sees the commonalities across the centuries.

“So much of what we are reading about is still relevant today,” she said. “It’s so interesting to think about how these books were written so many centuries ago, but the message still pertains to modern life.”

Sharing a passion for ancient history

That is an encouraging sign for Nikias, who hopes to instill the same reverence for the classics that he developed growing up in Cyprus and later studying in Greece. Although he pursued a career in electrical engineering, earning his undergraduate degree at National Technical University of Athens before finishing advanced degrees from the State University of New York at Buffalo, his passion for ancient mythology persisted.

He has taught special seminars on Greco-Roman history and drama to incoming freshmen. Many of his speeches are peppered with references to mythological figures. He maintains appointments in both electrical engineering and the classics at USC.

His counterpart is also well-versed in classical thought and literature. Before assuming his current role, Romans directed USC’s prestigious Thematic Option Honors Program. Students in the program dissect the writings of Homer, Plato, Dante, Shakespeare and other literary legends. They grapple with questions of civic virtue, social justice, ethics and identity across the ages and in contemporary society.

So when Nikias approached with an offer to join him in the classroom, Romans embraced the opportunity. For both instructors, teaching keeps them connected to the mission of the university.

“It reminds you of what this place is all about,” Romans said. “You see the institution from the standpoint of the students. You see their passion in their energy and the questions they ask.”

Added Nikias: “I can see how smart they are. It’s a direct reinforcement for me of the quality of the student body we have today. They are brilliant.”

Overseas research opportunities, like the one in which Max Novak unearthed a centuries-old sword, help the department expand its reach.

Jacob Soll takes on the finances of Greece — now, in Greek

The professor of history and accounting and USC President C. L. Max Nikias present Soll’s book to the prime minister of Greece.

USC president teaches the classics to spark passion for humanities