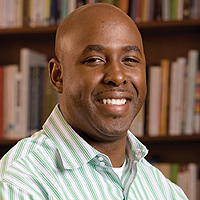 “We should think about how faculty interacts with students in a much more comprehensive way,” said Darnell Cole.

Constructive criticism is a balance of positive and negative feedback. When professors practice this technique with their students, studies have shown an improvement in those students’ grades and educational satisfaction in college.

USC Rossier School of Education professor Darnell Cole examined the impact such faculty-student interactions have on African-American and Hispanic students in a recent study published in the Journal of Student Development.

Cole said it behooves faculty to adopt practices that work for the two groups, which are among the most underrepresented student populations and the least prepared for college work. A growing number of minority students are entering college, Cole said, and African-Americans and Hispanics are projected to make up more than 30 percent of college enrollees by 2050.

Unlike critique, which is just negative feedback, constructive criticism includes timely and specific negative feedback with useful strategies for skill improvement, support and encouragement, he said.

But many college professors don’t use constructive criticism with their students.

Among his findings, Cole found that faculty support and encouragement was positively linked to both groups’ grade point averages. In addition, support had a greater impact on educational satisfaction than peer involvement did for both African-American and Hispanic students.

Negative feedback from teachers, however, appeared to have a more detrimental effect on African-American students’ educational satisfaction, according to the study.

Cole said the results suggested that constructive criticism as a “wise schooling” practice should be encouraged as a pedagogical method for interaction with minority students.

“We should think about how faculty interacts with students in a much more comprehensive way,” Cole said. “Our role as faculty is not just about critiquing student work but making students feel like they’re part of an academic community.”

Cole suggested faculty training may be necessary to effectively develop and promote constructive criticism that improves academic performance and success in college for African-American and Hispanic students.

The Benefits of Constructive Criticism