USC’s famed Trojan Marching Band is moving up to the penthouse.

At least that’s how it feels to many members of the storied program. The members recently ditched the colorful but crowded basement of Stonier Hall on the USC University Park Campus for a spacious second-floor home in the newly remodeled Lyon Center.

“This is the first place that will be 100 percent ours,” said Stephanie Lamb, a third-year piccolo player and the band’s general manager. “It was literally built for us when they renovated the building.” 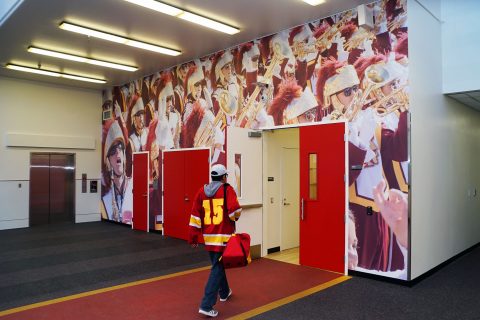 A mural surrounding the entryway to the Trojan Marching Band’s new home shows the band in action. (USC Photo/Brett Padelford)

The new space is a vast improvement. The band now has room for indoor rehearsals on those rare days of inclement weather. Its members can stretch out in a new student lounge. Storage areas are dedicated to uniforms and larger instruments like tubas and drums.

But the biggest upgrade might be the locker rooms. In Stonier Hall, students in the 300-member band jostled in narrow hallways lined with tiny lockers. Many left their uniforms and instruments at home because they didn’t have enough room to store their gear. And men and women shared the cramped territory.

In the new facility, separate locker rooms allow students to suit up without the usual crush of bodies. Custom lockers feature plenty of space for uniforms, helmets and instruments. Each locker even has a tiny shelf for sunglasses, a crucial component of the band’s signature look.

You can feel the energy. This is our new home, with all the bells and whistles.

“They are genuinely excited,” said Arthur Bartner, the band’s longtime director. “You can feel the energy. This is our new home, with all the bells and whistles.”

Securing a new location for The Spirit of Troy had been on Bartner’s wish list for decades. When he joined the university in 1970, the band was scattered across campus. Uniforms were stored in one area, large instruments in another. 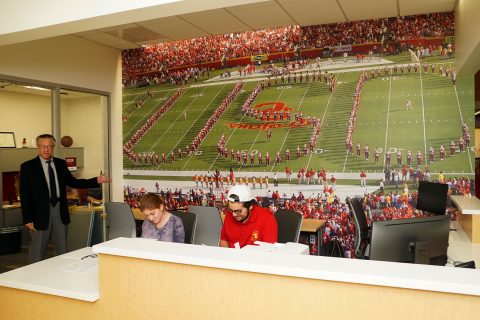 Longtime band director Arthur Bartner, left, has a sense of fulfillment now that The Spirit of Troy has moved into its new space. (Photo/Brett Padelford)

So when he managed to snag the basement of Stonier Hall in 1995, he felt fortunate to be able to bring the band together under one roof. But the program quickly outgrew the building.

Two decades later, two band members took up the band’s case and went directly to the top for help. Corey Dennis and Emily Moneymaker spoke with USC President C. L. Max Nikias during one of the monthly sessions he holds with students.

Many see the band as the face of the university, Dennis argued, but its facilities didn’t reflect its status. Moneymaker backed him up, and President Nikias pledged to check out the band’s offices. Within weeks, he appeared as promised.

“I believe he was the first USC president to tour that space,” Dennis said.

Nikias vowed to find a fitting home for the band after seeing the confined basement. The Lyon Center, which was scheduled for a renovation, seemed like the perfect new quarters.

The new space took shape under the guidance of one of the band’s assistant directors, Chris Norton, a licensed engineer who earned degrees in civil engineering and building science from USC. As a result, the pavilion is filled with personal touches. A nook above the rehearsal area allows Bartner to survey and direct the ensemble. Murals depicting The Spirit of Troy in action fill the walls.

Alumni and friends of the band are already competing for naming opportunities to help fund the new space. Donors have quickly snapped up sponsorship of the student lounge, men’s locker room and pantry. 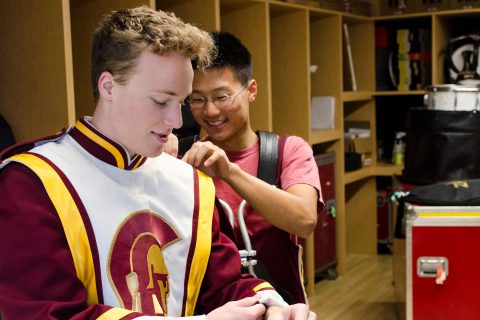 A few final element will be added in the coming months, but as Bartner quickly closes in on half a century at the helm of the Trojan Marching Band, he is glad to see his dream finally realized.

“There’s a certain feeling of fulfillment that is very satisfying,” he said. “I have a feeling that my mission is now complete.”

New headquarters for The Spirit of Troy

Even as they revel in their new digs, members of the band acknowledge a tinge of nostalgia for the basement they left behind.

Photographs and memorabilia gradually blanketed the walls of Stonier Hall through the years. Tributes to former band leaders shared space with platinum records. Even the ragged couches in the tiny student lounge held a certain charm.

“There’s a lot of history there — it was the first real home for the band,” Lamb said. “So many generations before me used that space.”

Dennis recalled the band’s logo, a helmeted Trojan head, inlaid in tile near the entrance to the old offices. As they poured into the room after a long day at the Los Angeles Memorial Coliseum, the band’s members would take care to step around the symbol as a sign of respect. He is hopeful that as The Spirit of Troy settles in at the Lyon Center, similar rituals will emerge.

“Now the band has the chance to shape and mold the new space to our style and traditions,” he said. “We will make that our home.”

To learn about sponsorship opportunities in the new space and other ways to support the band, visit the Trojan Marching Band’s giving page or call (213) 740-7879.

Whether it’s by bus, plane or train, The Spirit of Troy has attended every Trojan football game from Honolulu to Happy Valley since 1987.

After 45 years with the group, Tony Fox directs the basketball band at home for the final time Saturday.