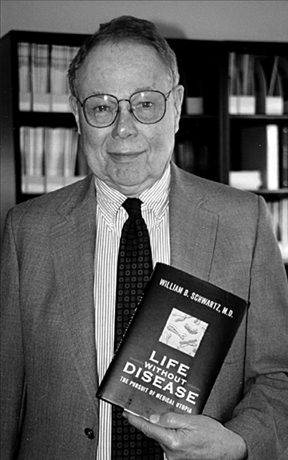 William B. Schwartz displays a copy of his 1998 book, Life Without Disease.

William B. Schwartz, a USC kidney disease specialist who became one of the nation’s leading thinkers on the intersection of medicine and economics, died on March 15 after a long illness. He was 86.

Schwartz, who authored or co-authored several books and hundreds of articles on subjects ranging from electrolyte disorders to the use of artificial intelligence in medicine to the rationing of health care.

Schwartz joined USC as professor of medicine in 1992 and remained with the university for the rest of his career—eventually being named professor emeritus of medicine in recognition of his service and dedication. At USC, his research examined the impact of molecular medicine on health care and on society.

From 1976 to 1992, he was the Vannevar Bush University Professor and professor of medicine at Tufts University. He founded Tufts Medical Center’s division of nephrology in 1950 and served as its chief until 1971, when he became chair of the Department of Medicine at Tufts Medical Center. On the 50th anniversary of the nephrology division in 2000, it was named in his honor.

Schwartz served as chair of Medicine and physician-in-chief at Tufts Medical Center until 1976.

In his work at Tufts University and Tufts Medical Center, he personally trained more than 60 nephrologists, many of whom became preeminent in their field.

He was known for his rigorous attention to detail in scientific analysis, which he imparted to the physicians he trained.

He led landmark discoveries in the physiology and management of acid-base and electrolyte disorders, in understanding potassium depletion, and in glomerulonephritis, a disease characterized by the inflammation of the small blood vessels in the kidneys.