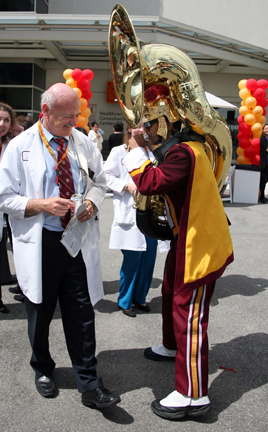 USC ophthalmologist Alfredo Sadun gets an earful during a special front-row performance by a member of the Trojan Marching Band at the April 3 celebration welcoming new USC hospital employees.

The sun shone brightly on a new era of academic medicine at USC as more than 2,000 hospital employees, Doctors of USC and clinic personnel were treated to fresh salads, grilled meats and a plentiful array of desserts on April 3. With many decked out in cardinal and gold, the crowd cheered and danced to the music of the USC Trojan Marching Band.

Travis Martin, a USC University Hospital ultrasound tech, hailed the hospitals’ transition to USC ownership, adding that the employee celebration “is really something special and new for us. We feel like we’re being welcomed to the family.”

An evening picnic was also held to recognize the nightshift employees. The picnics were hosted by Mitch Creem, who was recently appointed CEO of the two hospitals.

Saturnino Don Andres Jr., a stationary engineer in plant operations for the hospitals, who attended the dinner picnic, added, “I’m glad to be on board with an organization that has such a good reputation.”

“The new USC employees are very excited,” he said. “They’ve been waiting a long time for this�and we’re all looking forward to building a great medical center.”