Richelle Smith feels right at home in the world of engineering and technology. After all, the recent USC grad grew up in Silicon Valley.

Even though science and engineering have traditionally been dominated by men, that’s slowly changing. It was the success of other prominent female engineers and scientists that encouraged Smith to jump into a career in technology. So it makes sense that Smith was drawn to study at the USC Viterbi School of Engineering, where two of every five students are women and school leaders heavily recruit outstanding female engineers to the faculty.

Smith completed her undergraduate degree in electrical engineering from USC Viterbi in 2017, and along the way earned accolades like a National Science Foundation Graduate Research Fellowship, Astronaut Foundation Scholarship and Barry Goldwater Scholarship.

Now the 23-year-old San Francisco Bay Area native is pursuing her doctorate in electrical engineering at Stanford University, with big plans to use engineering to help others. She recently shared her thoughts with USC News about her experience as an aspiring engineer.

What motivated you to get involved in engineering?

From an early age, I was inspired by Marie Curie’s life story. She was the first woman to win the Nobel Prize thanks to her research and invention of the radium extraction process. Ever since her discovery of radioactivity more than a century ago, many people with tumors and cancer have benefited from radiation therapy.

Then in 11th grade, I learned that quantum computers could dramatically speed up cancer diagnoses and help with developing new drugs. Around that time, scientists discovered a new phase of quantum matter, called topological insulators, that could make quantum computers much more powerful. That summer, I interned at the UC Santa Cruz physics department, studying these new materials. That opportunity inspired me to become more self-directed and eager to explore unknown territory in and out of the lab. It also inspired me to pursue electrical engineering and electrophysics as my major.

What are some memorable experiences from your time at USC?

I really enjoyed being part of the W.V.T. Rusch Undergraduate Engineering Honors Program. I helped organize the Engineering Honors Colloquium and moderated it. We put together a diverse lineup of speakers to expose students to various career paths in engineering. I was excited to be able to introduce four female speakers to the class to share their work, lessons learned and advice. Hearing comments from female students who were inspired by these speakers was very encouraging. 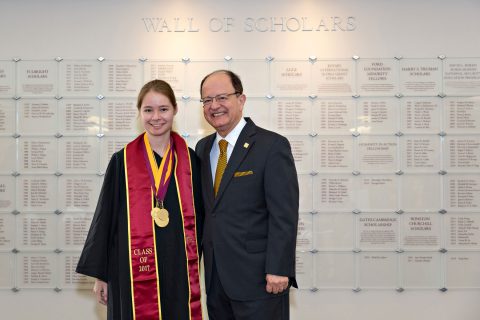 I also enjoyed teaching and getting involved in community service at USC. I was a teaching assistant for a seventh-grade math class, and mentored elementary school students in math. I was also a Viterbi Academic Resource Center peer tutor for electrical engineering classes. Breaking down technical concepts is very satisfying.

What kind of research did you do?

Through the Merit Research Program at USC Viterbi, I was fortunate to get involved in research within a few weeks of entering USC. I first joined a cancer-related project in Professor Paul Newton’s computational oncology lab. I applied evolutionary dynamics and network theory to model cancer’s interaction with healthy cells. We were working on a model that could predict where a cancer would spread. This could be used to provide targeted cancer treatment.

After that I joined Professor Armand Tanguay Jr.’s optical materials and devices laboratory, which was developing a camera for use inside the eye. It was part of retinal prostheses to restore sight to the blind. One of the challenges is protecting the electronics from the body’s corrosive saline, or salty, environment. I joined the project as a freshman, with no background in semiconductors or circuit design. But I successfully “taped out,” or designed, my first chip and had it fabricated by USC’s MOSIS Service. It was a test chip that could detect the extent to which the coating on these bioimplantable devices was being contaminated by salts in the body.

In my senior year, working with Professor Hossein Hashemi, I analyzed and designed oscillator integrated circuits, which are useful in wireless and wireline communication systems.

What did you do for fun or to escape the research lab? 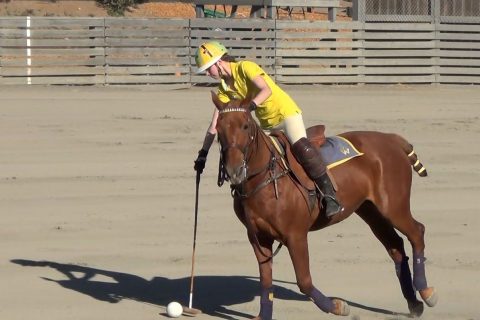 Smith’s lifelong love of horses led to time with the polo team at USC. (Photo/Courtesy of Richelle Smith)

No matter how far my interest in engineering takes me, I will never stray far from horseback riding. I’ve been around horses since I was 6, and horseback riding is the most confidence-building and exhilarating exercise I know. In high school, I decided to take it one step further by learning to play polo.

When I was applying to universities, I wanted to continue horseback riding or polo. USC stood out to me not only for its strong engineering program and research, but also for the opportunity to continue playing polo. I feel very lucky to have been a starter on USC’s polo team. It definitely improved my leadership skills and taught me to speak up and be assertive.

Polo has also given me a unique opportunity to help others. I have trained horses to work with children and also taught horseback riding to children with disabilities and behavioral problems through the Square Peg Foundation and Westwind 4H Riding Institute.

Some of my other hobbies are playing electric guitar and bass and growing carnivorous plants.

What are your longer-term goals and interests?

I’d like to become a university professor and apply my electrical engineering background toward developing novel circuits and biomedical systems to improve the lives of people affected by disease or disability.

Susana Cavallero’s study of a parasitic infection was just the start of her work on cardiovascular disease.

Creating new heart muscle out of stem cells? This grad student is doing it