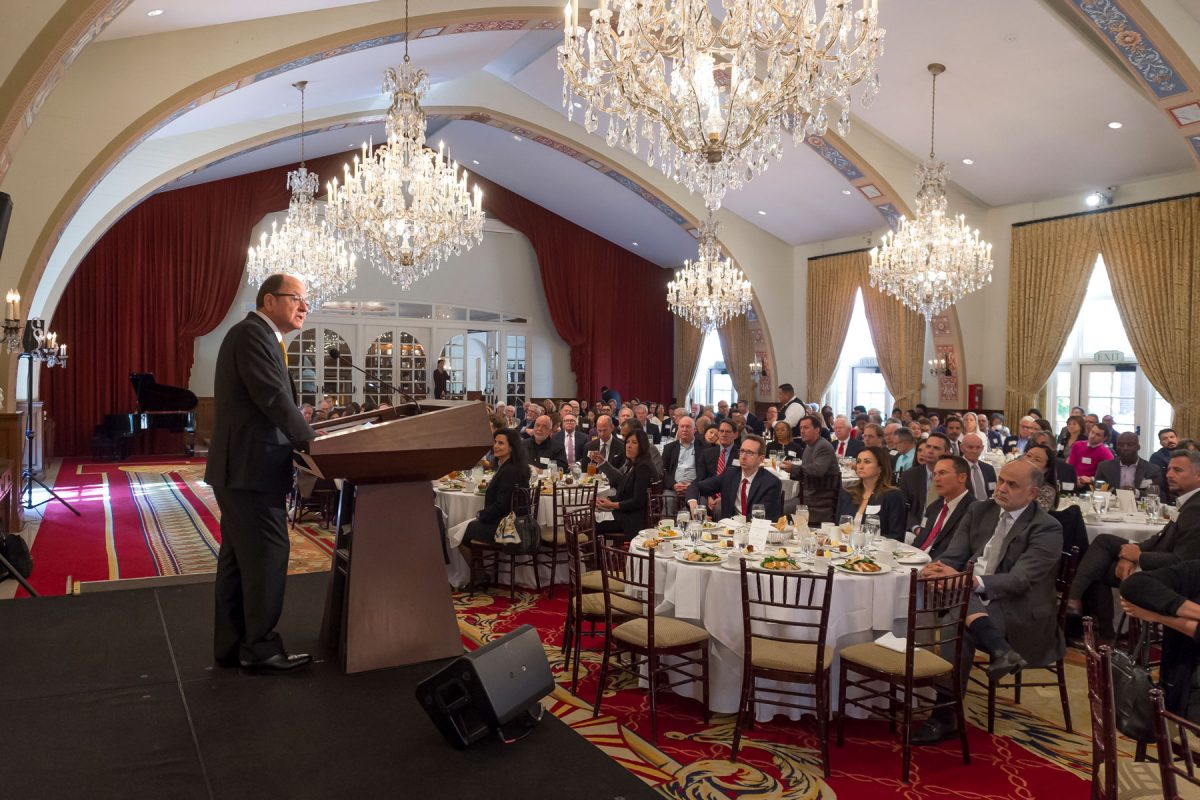 USC is redoubling its commitment to upholding the crucial values of higher education, said USC President C. L. Max Nikias in his annual State of the University Address.

Speaking to faculty and staff at the University Park Campus on Feb. 26 and March 1 and at the Health Sciences Campus on Feb. 27, Nikias stressed the role of great universities in advancing freedom, imagination, compassion and the search for truth.

“Today, more than ever, higher education is the key to instilling the values that create an open and free society,” Nikias said. “This is a role of lasting merit, part of the enduring concept of education as enlightenment, of education that advances civilizations.”

USC must continue to defend and advance the values of the world’s academically elite institutions, defying grumbles from critics who call universities irrelevant and inaccessible.

Nikias underscored the university’s efforts to make education accessible and affordable to more students and beneficial to a wider world. He also acknowledged that as USC celebrates its achievements, it also must question itself and seek out ways to improve and adjust to change, because the stakes are high. 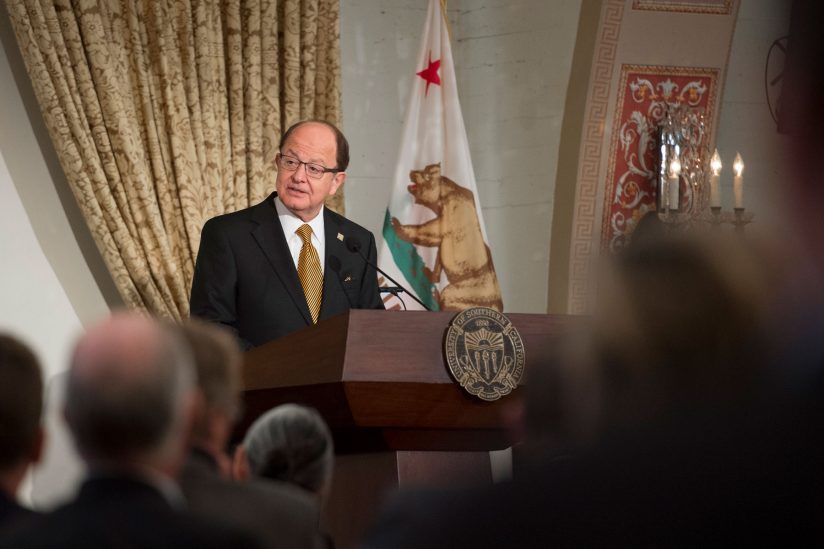 But truly investing in humanity means empowering all faces of it. The commitment to a diverse humankind is embedded in USC’s DNA, Nikias said.

The university’s values on gender equality, for one, date back to 1880. Its articles of incorporation include this line: “Said University shall be open in every respect for the equal education of both sexes.” Its first valedictorian was a woman, as were several of its first faculty members.

Today, 42 percent of USC’s tenure-track faculty are women. Women at USC have made especially big gains in technical fields, where their numbers traditionally lag nationally. In the USC Viterbi School of Engineering, female students account for nearly 40 percent of the undergraduate class. That’s double the U.S. average. At the graduate level, women comprise 1,700 of the school’s students — the most of any engineering school in the country. And at the Keck School of Medicine of USC, female students make up 52 percent of the entering class for eight years running.

“Such inclusiveness is part of our proud heritage,” Nikias added. But USC cannot let up on its inclusion efforts. That is why Provost Michael Quick established the Diversity and Inclusion Council, which works with diversity liaisons at each USC school to promote equity, opportunity and access.

Address reflects on abuse of power

Unfortunately, even as USC accelerates its diversity efforts, it has not been immune from the national discourse on sexual harassment and abuse of power, Nikias acknowledged. “Bringing unacceptable behavior out of the shadows and into the light is the first step in eradicating it,” he said. “Change is imperative. And we stand united on this front.”

Citing the widely publicized case of the Keck School of Medicine’s former dean, whose alleged actions shocked the university, Nikias called the experience “a great disappointment” and said he shares the USC community’s frustration.

In the months after the case, the university created the Task Force on Workplace Standards and Employee Wellness. The USC Academic Senate is revising the USC Code of Ethics as well. Based on the recommendations of the task force and an external review, the university will create an action plan to restructure several administrative operations and employment policies.

We must strengthen our core values and recommit ourselves to those values.

“We must learn from this experience and make all the necessary changes,” he said. “We must strengthen our core values and recommit ourselves to those values.”

Nikias went on to describe how shared values can sustain an environment of trust and fairness.

“We must move, quickly and decisively, to establish an improved culture, one that is based on equity, professionalism and ethics,” he said. “We must develop coherent and centralized systems for receiving and handling, in a timely manner, complaints of any nature.”

The entire Trojan Family can play a role in transparency and strong values, he said. “We can start by reinforcing USC’s commitment to medical sciences, education and patient care.”

And USC’s medical enterprise continues to stand as a point of pride for the Trojan Family.

Nikias cited a few of the medical entity’s high points in 2017. Despite handling some of the nation’s most complex medical cases, Keck Hospital of USC has had stellar patient safety ratings. The volume of patients at the medical center has skyrocketed in the last eight years. And Keck Medicine surgeons and doctors provided first-of-their-kind surgeries and therapies. On the medical research side, over the last five years, research funding has jumped from $196 million to $294 million and junior faculty awards more than quadrupled, from five to 22.

In addition, the Keck School of Medicine received a full, eight-year accreditation this month, highlighting the quality of its programs. In the most recent academic rankings, seven departments of the Keck School of Medicine of USC ranked in the top 10 in the nation: Physiology and Neurosciences, Microbiology, Ophthalmology, Neurology, Orthopaedics, Otolaryngology and Preventive Medicine.

The medical school’s growth and excellence are reflected in the strong support shown by donors, Nikias said. Donors have invested $1.3 billion in USC’s medical programs through the Campaign for USC. That fundraising bolsters the overall success of the campaign, which exceeded its goal 18 months ahead of schedule. The Campaign for USC has already surpassed $6.6 billion — $600 million more than the university had expected to raise by this date.

Success, though, stretches beyond the USC Health Sciences Campus. Nikias praised faculty across USC for its academic accomplishments.

Thanks to the faculty’s research quality and productivity, USC’s annual research expenditures jumped 14 percent to $764 million — an all-time high. “Our faculty are winning research grants even as it grows more competitive,” Nikias said.

Nikias extolled the faculty for outstanding teaching, the heartbeat that sustains great universities. He also credited them for their work with the provost toward a new strategic plan that enables USC to “reimagine our university’s future and redefine leadership.” The USC Board of Trustees recently approved the ambitious plan.

Just as the faculty accolades increase, so do those for students. This year, 22 students won Fulbright awards, the most in any university west of the Mississippi. Eight students garnered National Science Foundation Research Fellowships. Two became Rhodes scholars.

At the same time, the academic competition to gain acceptance to USC grows ever stiffer. A record-number 63,000 students applied for undergraduate admission to USC this year, and only 13 percent will be accepted. This elite admission rate will place USC among the nation’s 15 most-selective universities.

Yet with selectivity comes openness. About 17 percent of USC freshmen are the first in their families to attend college, and about a quarter of the class are underrepresented minorities, he said. Among U.S. peer private universities, USC remains No. 1 in sheer number of Pell Grant recipients, No. 2 in the number of Latino students and No. 3 in the number of African-American students. And more top students can now attend, regardless of their financial background, thanks to a dramatically expanded financial aid pool made possible by donations to the ongoing Campaign for USC.

“We want to show the world we mean it when we say that here, in this University of Southern California, exclusivity and inclusivity work as one,” Nikias said.

To that end, Nikias said the university’s values call for the protection of a vulnerable segment of its student body: those in the Deferred Action for Childhood Arrivals (DACA) program. DACA enabled some minors who entered or stayed in the U.S. illegally to remain in the country for two years or more. On Feb. 26, the U.S. Supreme Court turned down a White House attempt to shut down the DACA program. That enables recipients to continue in the U.S. for now. But DACA recipients’ long-term future remains unclear.

“I can only remind you that we all have a vested interest to graduate all of our students with a USC degree,” Nikias said.

“Democracies, from the beginning, have agonized over the moral issues at the heart of the DACA program. America is no different.

“But this University of Southern California,” he vowed, “will never shrink from its vision to be global, to be committed to a rich exchange of ideas, and most of all, to be inclusive.”

The university president makes a surprise visit to students and families participating in the Neighborhood Academic Initiative, which helps children who live near USC get ready for college.

The University of Strathclyde in Glasgow honors Nikias for his ‘dynamic leadership in higher education.’

The conference’s governing body includes all 12 university presidents and chancellors.