USC Marshall School of Business students, faculty and staff walk by his memorial every day.

Tucked into an alcove in the lobby of Bridge Hall and protected by glass, a bronze bust memorializes a man wearing spectacles and a kindly smile.

But who was this 1928 graduate? A plaque describes a scholar, businessman and humanitarian “whose personal involvement and financial generosity shall never be forgotten by those who pass through the corridors of the School of Business Administration.” 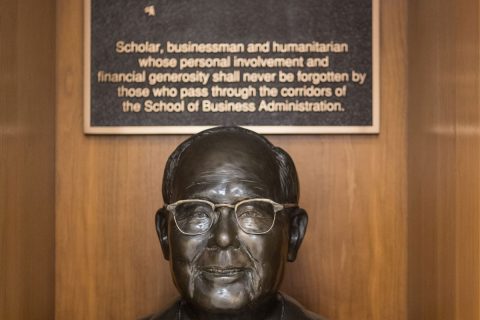 A bronze bust was created in the image of Albert T. Quon in 1987. It sits in the lobby of Bridge Hall. (Photo/Brian Morri)

“That is my great, great uncle, Albert T. Quon,” Ng said. “I passed by [the bust] every day going to my accounting classes, but I don’t think I would have realized all that he’s done for the school had I not actually been related to him.”

Today’s students might care to know that the man for whom that bronze bust was created in 1987 was in fact the embodiment of the very values USC Marshall celebrates the most: hard work, entrepreneurship and loyalty to the Trojan Family.

“I actually got to meet him when I was small,” Ng said. “He inspired the whole family and many others as well.”

From China to the U.S.

Quon was born in Canton (now Guangzhou), China, and moved with his father to the United States to take advantage of the many opportunities available in then-growing Southern California. He completed high school in San Diego and decided to attend college instead of going into the family business. He chose USC.

But he had to pay his own way. In 1925, Quon took a job as an agent for the New York Life Insurance Co., selling policies to the Chinese community in Los Angeles. At the time, USC’s School of Commerce held classes in a downtown building.

“Classes were held in rooms on the top floor of a building at Los Angeles Street and Seventh Avenue,” he told the Marshall Magazine in 1996. “However, in 1926 they discontinued classes at that location, and I had to take the streetcar to campus.”

Quon excelled academically and was popular on campus. He was a member of Beta Gamma Sigma and Phi Kappa Phi, and served as president of the Cosmopolitan Club and the Sigma Pi Alpha business fraternity.

And he vowed that if he ever became successful, he would fund scholarships for international students like himself. 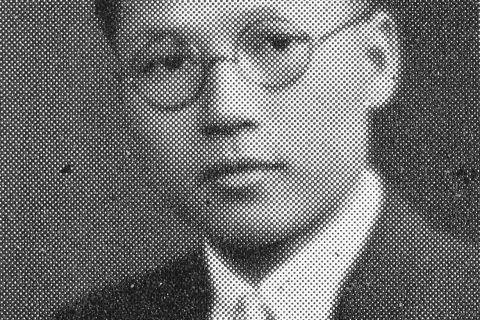 He finished his degree in just three years, despite the fact that English was his second language, and he met Lily, a Chinese woman studying music at USC who would become his wife. The future seemed bright.

Upon graduation, Quon returned to China, establishing an import/export company there in 1929. The company grew, despite the challenges of the Depression. However, sensing war clouds on the horizon, Quon and his wife returned to Los Angeles just ahead of the Japanese Invasion of China in 1937.

America’s entry into World War II made it nearly impossible to continue importing goods from China, so like any good entrepreneur, Quon pivoted — importing instead from Mexico, Haiti and the Caribbean.

“It was a case of making adjustments or perish,” he said at the time.

He later resumed importing art, antiques and fine furniture from Hong Kong, Taiwan and Thailand and, after President Richard Nixon’s historic visit in 1972, from China once again.

In 1953, he approached USC to endow a significant scholarship fund for international students from the Pacific Rim — The Albert T. and Lily Quon Endowed Scholarship in Business Administration.

“I realized that USC gave me the tools to set up my business, and it gave me the inspiration that drove me forward.”

“I realized that USC gave me the tools to set up my business, and it gave me the inspiration that drove me forward,” he said.

When he retired in 1976, he continued to be involved with his alma mater. He and his wife often hosted international students at their home, Ng said.

In 1975, Quon received the USC Alumni Award for Business Excellence, and in 1985, the Albert T. Quon University and Community Service Awards were established, which are presented each year at the MBA commencement ceremony.

Quon lived a long life and enjoyed a large, extended family. He died in 2001 just shy of his 101th birthday. His first wife preceded him in death in 1976 as did his second wife, also named Lily, in 1999.

But his spirit and generosity live on through his gifts to USC Marshall. There have been 343 students hailing from Pacific Rim countries who have benefited from the Quon family scholarship since 1990 (an average of 12 per year), including eight undergraduates and five full-time MBA students in the 2017-18 school year. There have been nine recipients of the Albert Quon University and Community Service Award.

“Albert Quon was the consummate Trojan,” said Dean James G. Ellis. “His generosity of spirit has created a lasting legacy, and he remains an example of what is possible to achieve through hard work and ingenuity.”

The publisher visits USC, where she talks about the harmful effects of 24/7 technology and Thrive Global, her new enterprise.

Lesson for bosses: Show workers you appreciate them, and they’ll work harder

Glenn Fox of the Performance Science Institute at USC Marshall explains why appreciation is good for the bottom line.

The benefactor every USC business student should know