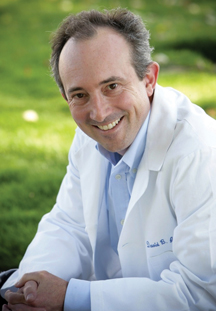 The Keck School of Medicine has announced a $5 million gift from the Ellison Medical Foundation to support cancer research under the direction of David B. Agus, a renowned oncologist and cancer researcher who joined the Keck School faculty on April 1 as a professor of medicine.

Agus will serve as principal investigator for the project titled “Molecular Technologies in Cancer.” The initiative will focus on molecularly targeted therapy, which holds promise as a new paradigm for cancer treatment.

“The generous gift from the Ellison Medical Foundation will allow the initiation of this exciting program and advance the clinical translational work at USC,” said Keck School of Medicine Dean Carmen A. Puliafito. “Dr. Agus is an outstanding choice to lead this project, which we believe will make a significant impact on cancer treatment in potentially revolutionary ways.”

The Ellison Medical Foundation is a non-profit organization founded by Lawrence J. Ellison, an entrepreneur and CEO of Oracle Corporation. The foundation is dedicated to supporting new, creative research that might not be funded by traditional sources.

“It is my pleasure to work with Dr. Agus and his research associates in developing new technologies to help patients with cancer,” Ellison said. “I believe his unique approach to medical oncology will help better control many of the diseases impacting mankind today.”

Agus’ research in proteomic technology seeks to integrate clinical trials, pre-clinical studies and molecularly targeted therapy—which focuses on molecular and cellular changes that are specific to cancer—to predict which patients will likely respond to a specific anti-cancer therapy. He will lead a team of researchers at the USC Center for Applied Molecular Medicine at the Keck School of Medicine.

“My team and I are so honored and excited to team with the Ellison Medical Foundation to begin these new programs at USC to help bring new technologies and high quality care to patients with cancer,” he said.

In addition, Dr. Agus will direct the new USC Westside Prostate Cancer Center, a multi-disciplinary center that is focused on cutting-edge care for patients with prostate cancer. The center is located at 8900 Wilshire Boulevard in Beverly Hills.

Prior to joining the Keck School of Medicine, Agus served as the director of the Spielberg Family Center for Applied Proteomics and research director of the Louis Warschaw Prostate Cancer Center at Cedars-Sinai Medical Center. He and his research team have focused on factors influencing the development and progression of cancer.

In the laboratory, Agus conducts research focused on understanding the biology of cancer and the development of new drugs and treatments for cancer. He also uses new technologies in the field of proteomics and nanotechnology that reveal valuable information regarding “on” and “off” switches of the cancer and ultimately a more complete understanding of the various factors that influence cancer development, progression and response to treatment.

Agus has published numerous articles and received several awards in the fields of cancer research and drug development.

He completed his medical internship and residency training at Johns Hopkins Hospital and a fellowship at Memorial Sloan-Kettering Cancer Center.

Agus’ profile gets an extra dash of glitz when he is showcased in the June issue of GQ Magazine as a “Rock Star of Science.” The feature highlights the need for more medical research funding and includes celebrities such as Sheryl Crow, Josh Groban, Seal and hip hop artist Will-i-am. The issue hits the stands on May 25.