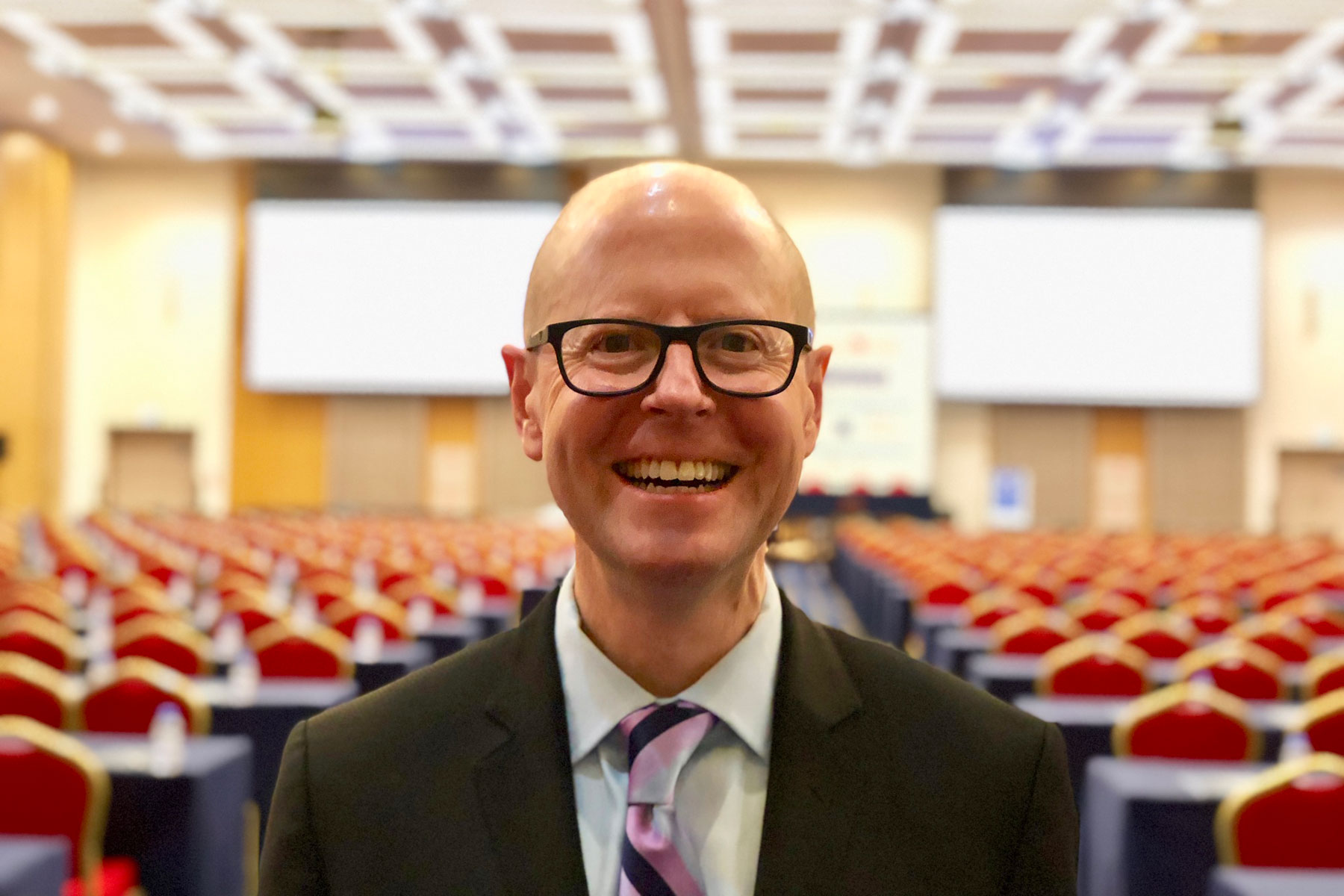 David Armstrong was the keynote speaker at the International Wound Healing Symposium in Abu Dhabi. (Photo/Courtesy of David Armstrong)

David G. Armstrong, professor of surgery at the Keck School of Medicine of USC, is the founder and co-director of the Southwestern Academic Limb Salvage Alliance, which aims to reduce amputations due to diabetes. He spoke to Paul Boutin of USC News.

Humanity crossed a line in 2009: For the first time in history, more people in the last decade died from non-communicable disease than from all the plagues in the world combined. We’ve entered what science pundit Steve Jones has, in a rather macabre but perceptive manner, dubbed the Age of Decay.

First was the Age of Disaster — 95 percent of human history — when people died from starvation, accidents, violence and cold temperatures. Around 12,000 years ago, we learned to “circle the wagons,” if you will, as a species. As we became agrarian, we moved closer together to store food. A natural byproduct of this was the Age of Disease, when plagues decimated populations. We’re now in the Age of Decay, when the big killers are non-communicable diseases — cancer, cardiovascular disease and diabetes. Pulmonary disease is fourth.

The longer that I have labored in my line of work, the more I realize it is the height of hubris as a clinician to think that I can “fix” anyone. Rather, I think the best thing I can do is help folks move through the world a little bit better. Our goal in this age as clinicians, scientists, policymakers, is to think not about fixing everything but rather to delay decay.

We all rightly take cancer and heart attacks seriously. Diabetes, however, has not risen to that level. If one were an evil deity and wanted to sock it to humanity, one wouldn’t pick something like cancer or a heart attack. Those are often far too dramatic. One would rather choose diabetes: It is silent, sinister and it happens in the background. No one sees it coming. How, then, does diabetes cause amputations?

Contrary to popular belief, diabetes doesn’t make your leg fall off. There’s a “stairway to amputation” with several steps. Why don’t people recognize this early and head it off? Because the first step that follows the onset of diabetes is neuropathy — the loss of “the gift of pain,” as one of my mentors Paul Brand called it, in your extremities. Just as Brand discovered with leprosy decades ago, it’s not that its sufferers’ flesh rots away secondary to some act of God, it’s that the loss of pain makes them vulnerable to injuries which then claim their limbs.

This leads to the next step: Ulceration, where the patient develops a wound in their weakened foot that doesn’t hurt — they’ll literally wear a hole through their skin. The lack of pain can lead to the patient dissociating from the wound: “It doesn’t hurt, I’ll deal with it some other time.” It happens so slowly that you don’t realize how bad it’s gotten. This is especially true when we add in another sinister byproduct of diabetes: peripheral artery disease, which often accompanies the peripheral neuropathy. That level of infection, frequently with peripheral artery disease, can prove lethal. Cutting off the feet or legs is sometimes the only way to save the patient’s life. This is why there is a diabetes-related amputation every 20 seconds around the world.

I had an epiphany my first day of clinic as a resident intern in Detroit. I had just helped to perform a reconstructive foot surgery on a 6-foot-9 college athlete. This big, strong guy, who was spilling out of his treatment chair, was clearly in pain. That is completely expected following that kind of surgery. In the next room was a little lady who had emigrated from Iraq, surrounded by extended family. Her family indicated she had a wound on her foot secondary to diabetes. As I was trimming and inspecting it, I looked at her hands. They were burnt, with lesions on the ends of her fingers. It turned out that she liked to bake bread and had literally burnt the ends of her fingers reaching in to the oven to turn loaves.

Responding to a lack of symptoms

I stepped out of the room and saw both of them in juxtaposition: The strong man struggling to control his severe pain and the frail woman oblivious to her badly burned fingers and the fact I had just cut away part of the flesh of her foot. It struck me: We as physicians, as doctors and nurses, are trained to respond to symptoms. How do we respond to a lack of symptoms?

Many of the patients we see here at the Keck School of Medicine of USC have already been offered amputations elsewhere. We believe that many of these amputations may not be necessary. What is so exciting here is that we can, unlike virtually anywhere else, bring a team of elite physicians, surgeons and therapists to the patient in a coordinated program. This model, which has (at its core) vascular and podiatric surgery, has been nicknamed the “Toe and Flow” model of care. The team, however is merged with technologies that have never before even been considered. From smart socks to injectable sensors to gene-therapy-directed wound healing to bluetooth-enabled artificial blood vessels, our group is exploring what’s next like no other group worldwide. I think this is the most exciting time in history to be a patient, an engineer, a scientist or a clinician. It’s even more exciting when all of these people can collaborate in one place to take on a challenge.

The reason I was recruited to USC was to help develop an amputation prevention network across the Southland. This is an alliance to eliminate preventable amputations over the next generation. We call this the Southwestern Academic Limb Salvage Alliance, or SALSA. I chose USC because there is an indomitable spirit here. It is one that is not afraid to take on big challenges to make a big difference. That’s our goal. Step. By. Step.

An intergenerational program explores whether tablets can improve a person’s well-being.