A tiny part of the brain plays a key role in what we successfully remember during stressful or emotional situations, according to a new USC study.

Researchers at the USC Leonard Davis School of Gerontology found that the locus coeruleus, a small region in the brainstem, is helping to select and form what are known as “adaptive memories,” which are important for survival.

“This area in the brainstem is helping us catalog the memories of experiences that are exciting or traumatic,” said senior author Mara Mather, a professor at the USC Leonard Davis School of Gerontology. “During these experiences, it is sorting which information is important to remember to help us avoid similar negative situations in the future.” 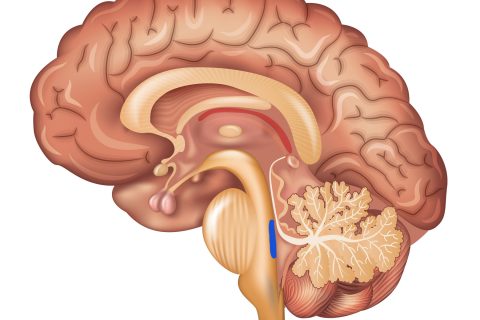 The locus coeruleus, which helps us preserve memories, is located in the brainstem. (Illustration/Shutterstock)

The locus coeruleus is highly connected to the rest of the brain. This small nucleus releases norepinephrine, a neurotransmitter and hormone responsible for regulating heart rate, attention, memory and cognition.

The memories that get preserved during arousing or frightening events may seem random. For instance, a witness to a robbery may recall what they were wearing that day but forget the perpetrator’s face.

“A surge in locus coeruleus activity during highly emotional or arousing events, such as a car crash or a scene of violence, helps to transform those experiences into vivid and lasting memories,” said David Clewett, the study’s lead author and a New York University postdoctoral fellow who completed a PhD in neuroscience at USC in 2016.

The study was published Feb. 7 in the Journal of Neuroscience.

For the study, the researchers sought to uncover how processes in the brain govern which memories get preserved during highly emotional situations, especially when an individual is faced with a threat.

While undergoing a functional MRI, participants were shown images of scenes with photos of objects superimposed over them. The participants’ task was to focus on and memorize each scene while ignoring the distracting objects.

On some trials, participants were given a punishment threat — a sharp buzzer sound signaling that they would lose money if they failed to accurately remember the appropriate scene image. Following the scans, subjects took a memory test to see if they remembered the relevant background images and the less important foreground images.

The threat of losing money led to higher levels of activity in the locus coeruleus on fMRI scans as well as more pupil dilation on average at the time of scanning, indicating a higher level of emotional arousal when additional focus was needed. Subjects also showed better memory for the background images relevant to the monetary goal but worse recollection for the irrelevant foreground images, indicating that the threat-based emotional arousal led to the enhancement of important memories — and the suppression of memories not relevant to protecting against the threat.

Becoming more easily distracted by irrelevant information is one hallmark of aging.

Clewett said that this process would potentially enable individuals to draw upon strengthened memories to avoid unpleasant outcomes in the future.

Previous research by Mather, director of the USC Emotion and Cognition Laboratory, has highlighted the locus coeruleus and its roles in cognition and memory. Current research in the lab focuses on how locus coeruleus function changes in aging and Alzheimer’s disease.

“Becoming more easily distracted by irrelevant information is one hallmark of aging and we are especially interested in how changes in the locus coeruleus might contribute to attention and memory changes in aging,” Mather said.

The project was funded by federal National Institutes of Health grant R01AG025340 and was also funded by a USC Endowed Fellowship to Clewett. Co-authors included Ringo Huang and Rico Velasco of USC Leonard Davis and Tae-Ho Lee of the University of North Carolina.

How the brain maintains moderation could offer answers to schizophrenia, other diseases

USC Dornsife neuroscientist studies the way nerve cells maintain normal levels of communication, giving insight into how some diseases arise — and might be treated.

Researchers will identify and catalog each cell type in finer detail than ever before.