“As a family, we decided not to be victims,” said Martín, a 30-year-old Marine and father of a 1-year-old daughter. “We elected to fight.”

“He’s decided to take the bull by the horns and do anything possible,” said Ringman, a researcher at the Keck School of Medicine of USC. “He’s making people aware of what’s going on, doing his own literature reviews, trying to find new angles of treating and preventing the disease.”

Ringman and Martín will travel to Jalisco, Mexico, in April. Ringman wants to build a network of collaborators to study the Jalisco mutation. Martín will raise awareness among families in Jalisco, where his roots lie.

Studying early-onset Alzheimer’s from the start

Martín is part of the DIAN (Dominantly Inherited Alzheimer’s Network) study. Researchers track changes in his brain and body before Alzheimer’s symptoms can develop. He takes medication called a BACE inhibitor. Researchers hope it might slow or stop early Alzheimer’s disease. 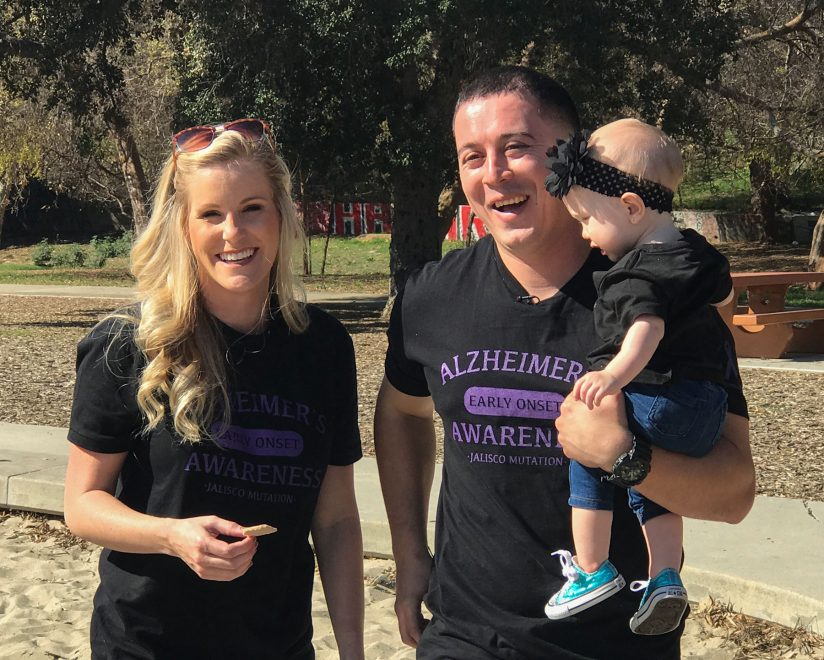 Andrés Martín with his wife, Amanda, and daughter, Alexis, who could also be a carrier of the gene mutation. (USC Photo/Ron Mackovich)

There’s a 50 percent chance Martín passed the Jalisco gene to his daughter, Alexis.

“I’m doing everything for Alexis, in case she needs the care about 40 years from now,” Martín said.

He raises awareness of the Jalisco mutation

Martín wants to encourage more people in Mexico to be tested for the gene mutation.

“People are losing hope when it comes to Alzheimer’s,” Martín said. “They’re saying, ‘My father died, my brothers are showing symptoms, I’m getting close to the age where it starts, and I have two kids.’”

Martín’s father and grandfather died of early-onset Alzheimer’s in their early 50s. Martín says doctors misdiagnosed his father because he was so young. That’s common for Alzheimer’s patients with the Jalisco mutation.

Doctors told him he had hydrocephalus, and he died after he had brain surgery, Martín said. “I believe if my dad had seen Dr. Ringman, he probably would have lived longer.”

Martín wants to raise awareness not only among people at risk for early-onset Alzheimer’s, but also among physicians.

“I want them to know about studies and research,” he said. “I want to raise awareness, but most of all, I don’t want people to give up hope.”

These early onset Alzheimer’s patients — descendants of a common ancestor in Mexico — are often misdiagnosed.

Half of all dementias, including Alzheimer’s, start with damaged ‘gatekeeper cells’

Once the cells are compromised, blood toxins can trespass into the brain and damage critical connections, USC researchers say.