Summit participants check in at the event. (Photo/Aditi Harish)

USC Own It, a full-day summit coordinated by students and designed to empower a new generation of women in leadership, attracted an impressive lineup of women at the top of their respective industries to USC’s University Park Campus.

“I’m a big believer that you can’t be it if you can’t see it,” said USC senior Claire Porter, who helped bring more than 100 women from dozens of fields to the sold-out event Feb. 10.

In his welcoming remarks, USC President C. L. Max Nikias noted how gender equality was written into USC’s articles of incorporation in 1880 — a time when the vast majority of colleges were open to men only. He also shared the words his two daughters said encapsulate women’s equality in 2018: “It’s. About. Time.” 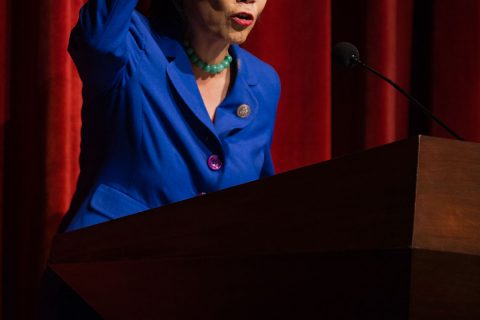 A day to inspire and educate

USC junior Erica Wenger, a business major and co-chair of the organization, said USC Own It aimed to both inspire and provide practical industry-specific knowledge to the 500 student attendees who will soon enter the workforce.

“We want to encourage women to go after these big goals by putting them in the same room with all of these successful women,” Wenger said. “As students, we’re at a time in our lives when we’re trying to figure things out. So if a girl comes for the day and only learns how to negotiate equal pay with an employer, then it’s worth it.”

Equal pay was one topic of discussion among the women in entertainment panel.

Orji, best known for her work on HBO’s Insecure, said she once used a fictitious assistant email to give herself leverage when negotiating salary. 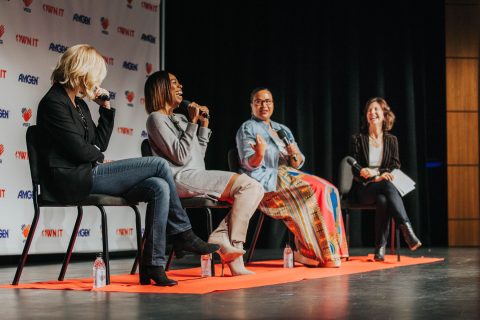 Yvonne Orji and Tiffany Smith Anoa’i, second and third from left, talk about being your own advocate at the Women in Entertainment panel. (Photo/Aditi Harish)

“You need to go with your gut and know your worth. When I raised my rate, I got fewer gigs, but the gigs I got were enough,” she said, adding that she urged artists take at least one business class.

Smith Anoa’i, executive vice president for entertainment diversity, inclusion and communication at CBS, had this advice: “Use your voice and ask. Studies show that men will ask for more, and a woman will have to work eight more years to make up for it because she didn’t just ask.”

The young women who spent more than a year planning the summit said a day devoted to female empowerment was especially timely given recent events, such as the historic 2017 Women’s March and #MeToo movement, which speak to the power in numbers.

“Post-feminism puts feminism on the individual, but things happen with a group effort,” said Porter, a communications major. “If one woman alleged sexual assault, for example, no one would have believed her. But because so many women stood up collectively in the #MeToo movement, they were able to make change. It’s a group effort.” 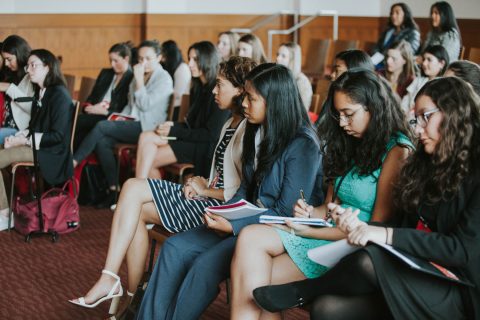 USC senior and co-chair Elyssia Widjaja echoed that sentiment. The international relations and global business major said the spirit of USC Own It is also to encourage a more supportive and uplifting culture among women.

“There’s a fine line between healthy competition and jealousy, and one of my mottos is that you should try to be a better person than you were yesterday rather than comparing yourself to others,” she said.

“We should be inspired by the women around us and their stories because there is space for everyone to succeed in their own right. If women supported each other more, I believe we’d be a more compassionate society.”

“Dean Joan” came to USC in 1955 and served generations of Trojans.