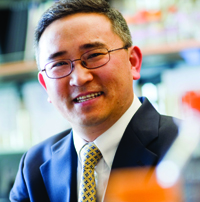 Jae Jung, Keck School professor and chair of the Department of Molecular Microbiology and Immunology.

Researchers at the University of Southern California (USC) have identified a critical molecular mechanism that allows the influenza virus to evade the body’s immune response system.

The study will be published in the May 21 issue of the journal Cell Host & Microbe.

“We have found a mechanism that the influenza virus uses to inhibit the body’s immune response that emphasizes the vital role of a certain protein in defending against viruses,”,” says Jae Jung, Ph.D., professor and chair of the Department of Molecular Microbiology and Immunology at the Keck School of Medicine of USC, and the principal investigator of the study. “Along with our previous studies (Nature 2007 and PNAS 2008), this finding could provide researchers with the information needed to create a new drug to enhance immunity and block influenza virus infection and replication.”

Several specific intracellular receptors are responsible for detecting the virus and activating the body’s defensive mechanisms. When a virus’ RNA enters the intracellular fluid, a receptor known as retinoic-acid-inducible gene I (RIG-I) detects it and triggers a response that limits virus replication and calls the body’s defenses into action. RIG-I acts as the sensor and security force against attacks, Jung explains. Then, a protein known as TRIM25 helps RIG-I transmit an alarm signal, which ultimately floods the cell and surrounding tissue with antiviral interferons.

The influenza virus is highly infectious and poses a serious and sometimes deadly health risk because of its ability to mutate into new strains and spread quickly during seasonal epidemics, as seen in the recent outbreak of the H1N1 swine flu virus, Jung says.

Researchers have long been working to understand how respiratory influenza is able to slip past the body’s innate immune responses. They have found that the influenza A virus has evolved by incorporating Non-structural protein 1 (NS1) into its genome to escape the RIG-I alarm system.

This process is one reason why the virus kills an average of 36,000 people every year. In fact, the 1918 “Spanish flu” pandemic influenza virus, which killed over 40 million people worldwide, muted the RIG-I response and interferon activity much more efficiently than contemporary flu viruses, Jung notes.

“Despite the conceptual linking of RIG-I with flu virus NS1, however, the precise mechanism has been unclear for a long period of time,” he says.

By studying the immune responses of animal models, researchers found that the influenza A virus NS1 attacks TRIM25, inhibiting its ability to assist RIG-I trigger the alarm system against the virus. Remarkably, a flu virus carrying an NS1 mutant defective for this activity loses its virulence in animal models, Jung says.

This work was performed in collaboration with Adolfo Garcia-Sastre, Ph.D., at Mt. Sinai Medical School and the final doctorate experiments of Michaela Gack, Ph.D., who is the paper’s first author and currently a faculty member at Harvard Medical School.

How influenza evades the body’s defenses