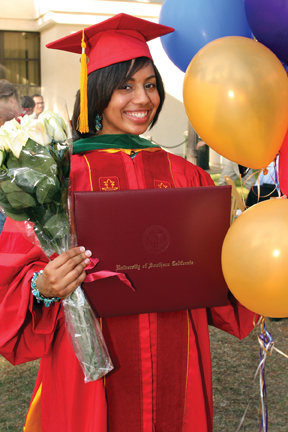 At commencement ceremonies held on May 17, graduates of the Keck School of Medicine prepared to enter a “renewed golden age of medicine,” said Keck School Dean Carmen A. Puliafito.

The Health Sciences campus celebrated additional commencement ceremonies, graduating Master of Science, Master of Public Health and Ph.D. students on May 13. Graduation ceremonies for Biokinesiology and Physical Therapy, Dentistry, Occupational Science and Occupational Therapy, the School of Pharmacy and the Physician Assistant Program were held on May 15.

With access to healthcare topping the current political agenda, Puliafito acknowledged the challenges and opportunities ahead for the 193 graduates who received the Doctor of Medicine degree at the ceremony in the Shrine Auditorium. “Equipped with your formidable clinical skills and with a strong moral and ethical compass, I guarantee that you will be personally and professionally challenged in ways that you cannot imagine today,” he said.

Eight of the graduates received a Doctor of Philosophy in conjunction with a medical degree, and three received a joint degree with a Master of Business Administration.

At the Keck School ceremony, Puliafito reflected on reports of medical professionals’ involvement in Central intelligence Agency interrogations of prisoners.

“The ethics of medicine are rooted in the basic idea that society can trust physicians in all circumstances to do no harm,” said Puliafito. “The American Medical Association’s code of ethics clearly states that physicians must oppose and must not participate in torture for any reason because participation in torture undermines the physician’s role as healer. … As you start your medical careers, I urge you to uphold the highest standard of medical ethics, no matter how challenging the circumstances. We expect nothing less.”

To view a transcript of the dean’s remarks, visit: http:// uscnews2.usc.edu/hscweekly/detail.php?recordnum=16552.

USC Executive Vice President and Provost C.L. Max Nikias predicted a coming revolution in the field of medicine, one that the current graduates will lead. “Many of you will go on to take roles that past generations, maybe even this generation, would see as miraculous, as you bring sight to the blind and help the lame to walk, and help the elderly live longer than ever before,” said Nikias. “Your accomplishments will be astonishing.”

Peter Katsufrakis, vice president of assessment programs, National Board of Medical Examiners, gave a commencement address at the Keck School ceremony. Katsufrakis is a former associate dean for student affairs of the Keck School.

At the commencement ceremony for the USC School of Dentistry, degrees were conferred upon 174 Doctorate of Dental Surgery graduates, along with 33 Dental Hygiene and 45 Advanced Dental Education graduates. “You have joined a very special group; life will never be the same,” said speaker Arthur A. Dugoni, dean emeritus and namesake of the University of the Pacific’s Arthur A. Dugoni School of Dentistry.

The USC School of Pharmacy awarded 176 new Doctors of Pharmacy, 29 M.S. and eight Ph.D. degrees, as well as 38 certificates to those completing residency or fellowship programs.

“Patients don’t care how much you know until they know how much you care,” advised School of Pharmacy commencement speaker Paul Gregerson, chief medical officer at the JWCH Institute. Gregerson reminded the graduates of the responsibilities that their privileged educations bring them. “For those to whom much is given, much is expected,” said Gregerson.

One by one, Blanca Martinez prepared her daughters for success. She gave up her job and essentially her life to drive them six days a week to the 32nd Street/USC Visual and Performing Arts Magnet School and to special afternoon and Saturday classes at USC Trio.

Keck School Dean Carmen Puliafito honors his father-in-law, a World War II veteran, and addresses the challenges and opportunities in health care in this — his second — commencement address to Keck School of Medicine graduates.

Transfer Graduates With a Focus on International Business

Fernando Campos’ interest in business developed at an early age. “I remember running a small, out-of-the-backpack business in middle school and high school, selling candy I had bought at Costco to my friends,” he said.

Gaining Experience in Research and Teaching

Hae Eun Chun came to the USC Marshall School of Business from her native Korea to pursue a Ph.D. in marketing, with an emphasis in consumer behavior, after earning her bachelor’s and master’s degrees in the subject. She said she chose the school primarily because of its outstanding research faculty.