Nearly 300 students and higher education professionals from USC and institutions across the state attended USC’s third annual First-Generation College Student Summit, designed to build community, educate and advocate for students who are first in their families to go to college.

“You are the epitome of the American dream. Don’t hesitate to reach out. All of us are invested in your success.”

Among that group, 40 percent are students of color and 27 percent are students of color who are also Pell Grant-eligible. The theme of this year’s summit, “Building CommUNITY,” resonated with Tiaira Muhammad, a senior majoring in broadcast and digital journalism at the USC Annenberg School for Communication and Journalism. Muhammad co-founded the First Generation Student Union at USC. 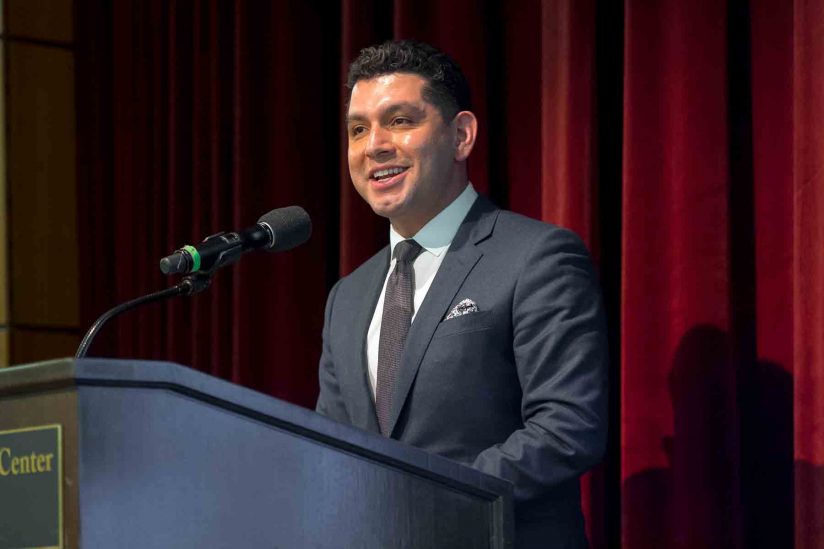 “I think one of the most important aspects of college is finding a community of people that support you and in whom you can confide in,” she said. “As a first-gen student, it’s easy to feel as though you’re the only one. … “I used to be kind of ashamed to say I was the first in my family to attend college, but it’s totally something to brag about.”

CNN correspondent Nick Valencia ’05 related his experiences as a first-generation college student at USC during his keynote. “Without a blueprint for going to college, it was challenging. You’re going to have to deal with a lot more than others who are more privileged than you, and it’s OK to be scared. But you can’t be afraid to take risks,” Valencia advised. “Before my dad died, he instilled three things in me — Sí, tú puedes: Yes, you can; greatness is measured by how much it takes to discourage you; and if you want to be extraordinary in life, you must do extraordinary things.” A recurring sentiment among many first-generation students in attendance was the desire to pay forward the knowledge gained through their own trials and errors. 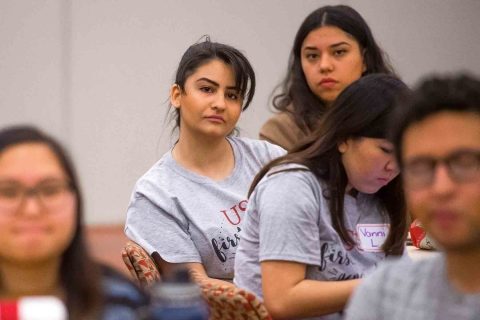 “We don’t have our families to help guide us through the system, expose us to resources, and often by the time we figure things out, it’s too late. That’s why I’ve educated myself to become that person for others facing similar struggles,” said Araksya Nordikyan, a junior majoring in philosophy, politics and law and a Norman Topping Scholar. “If I can prevent them from making one extra mistake or make them aware of one extra scholarship, then I am doing my part to redefine this community’s success.”

Ryan Lopez, a senior chemistry major, was raised in South Los Angeles by his father, a bus operator and war refugee from El Salvador. With ambitions of becoming a NASA astrochemistry researcher, Lopez also helps USC Department of Public Safety cadets navigate college applications, SAT and ACT testing, and math and science coursework. “In this way, I’m helping the next generation of first-generation students from the neighborhood around USC to be better prepared than I was to succeed in an academic setting,” Lopez said. Ho, whose Office for Diversity and Strategic Initiatives hosted the summit, said its universitywide sponsorship demonstrates the commitment of schools across USC to support this inspiring and growing student population. The summit also provided a safe and empowering place for students like Ana Mercado, who said she initially struggled to feel like she belonged at USC. The sociology and contemporary Latin American studies junior who co-founded Improving Dreams, Education, Access and Success (IDEAS), a student organization for undocumented USC students, said she has since found critical mentors and advocates among faculty, staff and peers at USC. “This is great community building for first-gen students, and creates an alliance between first gens at USC and on other campuses,” she said. “All of the people here seem to be truly invested in supporting one another.”

View a video about first-generation college students at USC:

The incoming class also has the highest average test scores in USC history, and it’s the most selective class, too.

Rubi Garcia lets us follow her journey as a USC undergraduate and the first in her family to attend college.

How to help first-generation college students thrive in stressful situations

Research shows that students can tap into their backgrounds for strength and perseverance — after a short session with seniors.