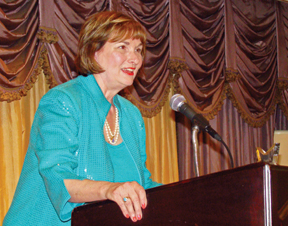 Cheryl Craft speaks at the April 16 John Douglas French Alzheimer’s Foundation event, which honored her for her work.Mary Ann Surprenant

Cheryl Craft, the Mary D. Allen Chair in Vision Research at the Doheny Eye Institute and professor of ophthalmology and cell & neurobiology at the Keck School of Medicine of USC, has received numerous honors in the past months for her vision research work and community service efforts.

On April 16, Craft was honored at a luncheon hosted by The Founding Associates of the John Douglas French Alzheimer’s Foundation (JDFAF). Held at the Beverly Hills Hotel, Craft was recognized for her long-term commitment to the foundation, as well as for her scientific research. She has served on the International Scientific Advisory Board since the late 1990s, and also is currently a Member on the Board of Directors of the foundation.

“Over decades of dedicated pursuit, Dr. Craft and her fellow colleagues have deciphered the keys which turn chemical pathways on and off inside nerve cells,” said Helena Chui, chair of the Department of Neurology at the Keck School of Medicine and director of the USC Alzheimer Disease Research Center, in her introduction of Craft at the JDFAF event. “In following the trail of arrestin and retinal cones responsible for color vision, Dr. Craft has contributed greatly to our understanding of retinitis pigmentosa and macular degeneration. Understanding these messaging systems inside nerve cells has widespread implications for all neuroscience, including unraveling the mysteries of Alzheimer disease.”

The Muses of the California Science Center Foundation also recently honored Craft for the research advances she has made in macular degeneration and retinitis pigmentosa. On May 16, she was celebrated as The Muses 43rd Annual Woman of the Year at a reception and lecture held at the Valley Hunt Club in Pasadena.

The Muses is a volunteer organization associated with the California Science Museum, which raises funds to support educational youth science programs and the California State Science Fair.

“As a scientist, it is really humbling to go out and interact with the public. I am proud to represent the Keck School of Medicine of USC and spread supporting words for science and science education. I am honored to receive these prestigious awards from these dedicated individuals raising resources for research and to support future scientists,” said Craft.

In addition, Craft has been named a 2009 silver fellow of the Association for Research in Vision and Ophthalmology (ARVO). The ARVO Fellows are recognized for their long-term accomplishments, leadership and contributions to the association.