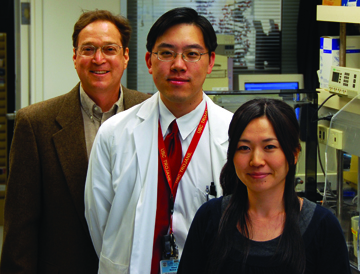 Keck School of Medicine researchers have identified a key mechanism that causes chromosomes within blood cells to break—an occurrence that marks the first step in the development of human lymphoma.

The study provides researchers with the clearest insight yet into why these breakages—called chromosomal translocations—occur at specific points in the chromosome, said principal investigator Michael R. Lieber, Rita and Edward Polusky Professor in Basic Cancer Research at the Keck School.

The study appears as the featured cover article in the June 12 issue of the journal Molecular Cell. The study is the second led by Lieber to appear on the cover of a Cell journal in the past six months.

“The new findings go to the heart of why cancers begin. This is an opportunity to see the very beginning step of human lymphoma,” Lieber said. “With this information, we can now begin to look at ways to interfere with this process in order to stop the lymphoma and to develop more targeted therapies for treatment.”

There are two types of lymphoma: B cell lymphomas and T cell lymphomas. Both B cells and T cells perform vital functions in the immune system by creating antibodies and destroying virus-infected cells. The beginning point, or inception, of most human lymphomas occurs when two chromosomes break and the resulting fragments are reassembled in an exchange.

Researchers specifically looked at T cell acute lymphoblastic lymphomas (ALL). ALL accounts for half of all childhood cancers under the age of five, and T cell ALL represents about 10 percent of ALL.

The USC scientists identified a specific enzyme known as the RAG complex that occasionally cuts the chromosome at an off-target site, causing lymphocyte (blood) cells to proliferate uncontrollably.

“The immune system is very good at its job,” Lieber said. “More than ninety-nine percent of the time it gets it right, but it only takes one mistake in one of a hundred million cells to cause a problem.”

The paper follows a similar study, published in the December issue of the journal Cell, in which Lieber and colleagues determined how the most common chromosomal translocation in B cell lymphoma occurs.

Researchers at USC have been working for many years to understand the underlying mechanisms that cause blood cancers.

“The goal is to understand translocations in various different forms of lymphoma,” Lieber said. “The two papers cover more than half of all human lymphomas. That represents a major step forward in understanding this disease.”

The study was funded by the National Institutes of Health.

Thanks to this scientist, doctors have another option for treating a leading cause of infant death

Years of research from USC Dornsife’s Chien-Ping Ko have led to the FDA’s approval of risdiplam, a cheaper and easier-to-administer drug for children with spinal muscular atrophy.

With top 250 countdown, KUSC and KDFC give classical music the California touch

For the first time ever, the USC-owned radio stations are playing back the 250 most beloved classical songs as voted on by listeners in the debut of the Classical California Ultimate Playlist.

The requirement extends to all faculty and staff working on-site through the end of the spring 2021 semester.flu vaccine.