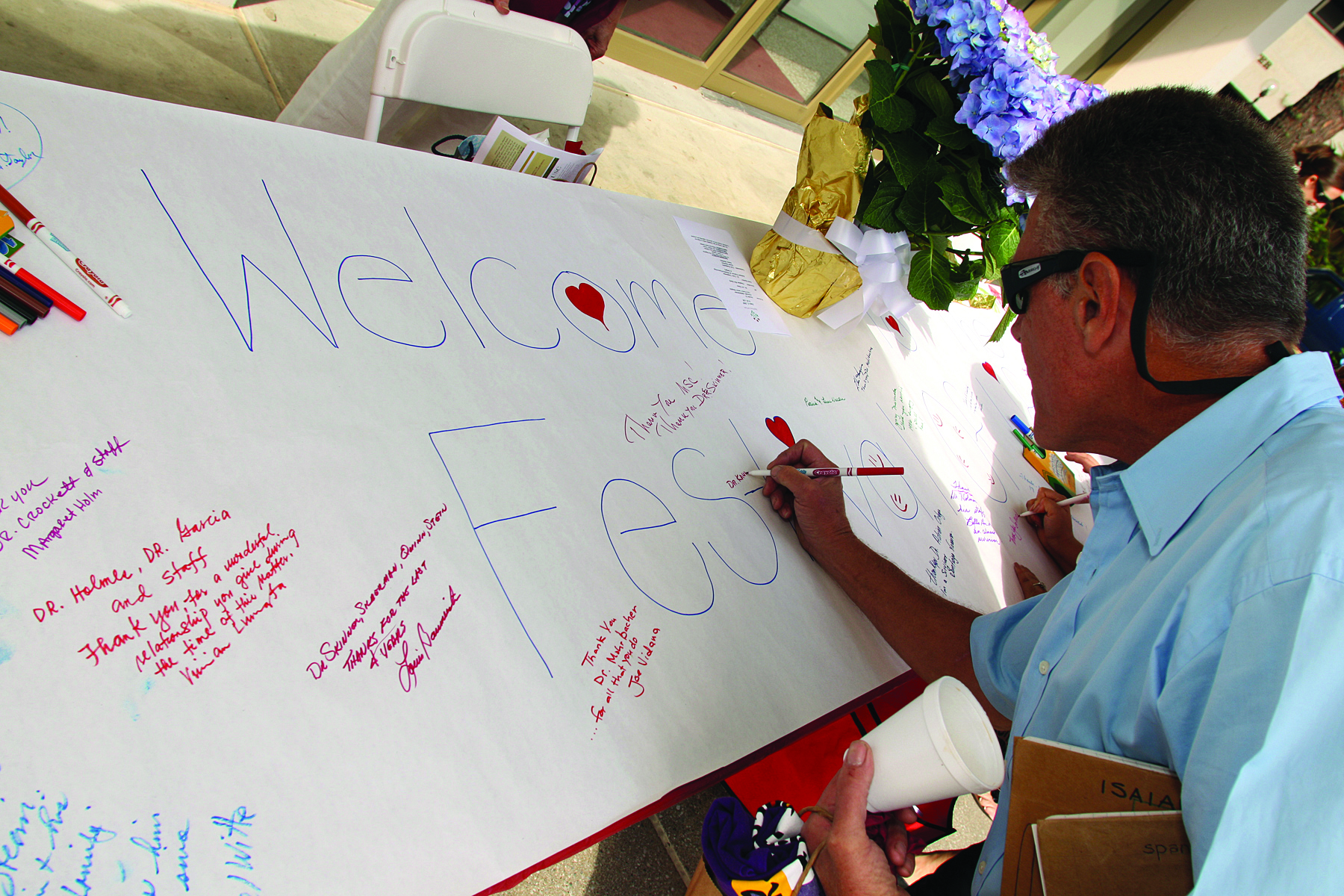 Festival of Life participant John Myer signs a scroll at the June 6 event, which brought together former patients and their families for a morning of celebration and inspirational speakers.

Hundreds of cancer survivors joined friends and family on the Health Sciences Campus on Saturday, June 6, to mark the 19th Annual Festival of Life.

Orchestrated by the USC Norris Cancer Hospital, the event brings together former patients for a morning of celebration and inspirational speakers.

Chorda Tympani, a medical student barbershop quartet who entertained the crowd with their rendition of “Come Fly with Me” during the formal program, had a very special member among their ranks. Robert Martinez, a first-year medical student at the Keck School of Medicine, is also a former patient of USC Norris, where he was treated for colon cancer in 2004.

He lauded USC Norris as an exceptional treatment facility that treats the “whole person” with compassion. Martinez, who was inspired to study medicine because of his experience with cancer, encouraged the crowd to share their stories with others.

“Always think about the patients who are being diagnosed, how you can share your success story with them,” he said. “Focus on how you can inspire others to keep fighting, because you can easily lose track.”

Vicki Kompaniez, a USC Norris volunteer and breast cancer survivor, recalled how she left in the middle of chemotherapy at another institution to finish her treatment at USC Norris.

“I walked in to Norris and I felt like I had come home,” said Kompaniez, whose husband also was successfully treated for esophageal cancer a year earlier at USC Norris. “The care, the love, the support; from the minute you drive up at the valet … you feel nothing but taken care of.”

Guests were treated to the sounds of Disneyland’s Bayou Brass Band while they enjoyed a continental breakfast under sunny skies. Harv the Magician roved the crowd, entertaining kids with balloon animals, and numerous booths offered information on survivorship issues.

The program was moderated by physician, author and television personality, Art Ulene and included comments from Claire Templeman, assistant professor of obstetrics/gynecology and surgery at the Keck School of Medicine, who shared her thoughts about hope as a driving force for those who work at Norris.

White doves were released at the end of the event, along with a cheer to current patients at the USC Norris Cancer Hospital, in the hopes that next year, they will join the ranks of survivors celebrating at the Festival of Life.