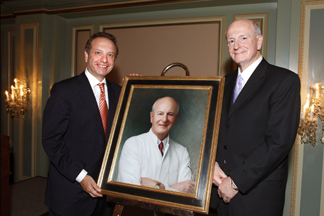 Keck School of Medicine Dean Carmen A. Puliafito presents Tom DeMeester with a portrait painted by artist John Swihart in honor of DeMeester’s 18 years as chair of the Keck School’s Department of Surgery.

When Tom DeMeester became chair of the Department of Surgery in 1990 he arrived at a medical school and a hospital that were at a critical turning point.

“USC used to be a school caged in the County Hospital. At the time it was breaking out of that to become its own private medical facility,” he said. “It was a big step to change that and to start recruiting people into that new culture.”

During almost two decades with the Keck School, DeMeester has seen the Department of Surgery through a number of turning points. He raised the department’s identity in the surgical world, making it one of the top five in the country. He saw a need for hands-on training for young surgeons and developed a surgical skills lab that became one the first of its kind in the country. Such training facilities are now a requirement for many residency and practical education programs.

DeMeester also distinguished himself as a nationally renowned expert on esophageal cancers and benign esophageal conditions such as heartburn and difficulty swallowing. His studies have resulted in more than 400 publications in peer-reviewed journals and numerous book chapters, books and videos. He originated and developed the field of non-invasive foregut ambulatory monitoring. As Chair of the Department of Surgery, he also served as chief of surgery at both USC University Hospital and LAC+USC Medical Center.

At his retirement reception held May 16 at the Langham Hotel in Pasadena, DeMeester noted that he is stepping down from his post of 18 years during another moment of great transition for the USC Health Sciences campus

“Now we’ve begun the ‘university period’ that will see us grow into a true academic medical center,” he said.

Keck School Dean Carmen A. Puliafito—the host of the event—recognized DeMeester’s many contributions during the evening that included a video tribute created by long-time surgery administrator Eric Alcorn and the unveiling of a portrait of DeMeester painted by artist John Swihart.

“We are starting a new chapter in a book that Tom began writing,” Puliafito said.

DeMeester received his medical degree at the University of Michigan. A conversation with the dean of the medical school guided him toward specializing in surgery at the Johns Hopkins Hospital. “That conversation changed my life,” he said. “It was my introduction to the academic world.”

DeMeester served as a cardiac surgeon based in Honolulu during the Vietnam War. After the Army, he joined the University of Chicago, rising to chief of the division of thoracic surgery. While in Chicago, he developed a new financial system to help medical schools and took this system with him to his next position at Creighton University in Omaha, Nebraska. His strong clinical and research expertise, along with his experience in administration and implementation of his financial system, caught USC’s attention and he was chosen to head the Department of Surgery.

Among his many other accomplishments as a surgeon and department chair he:

• Hired high profile surgeons who serve as the bedrock of the department’s clinical efforts.

• Established a basic science program headed by Peter and Ite Laird and raised $1 million to pay for new laboratories.

• Produced five chairs of surgery throughout the country.

• Created one of the top 10 surgical residency training programs in the United States.

• Partnered with the armed services to set up a Navy training program in trauma, under Demetrios Demetriades at the LAC+USC Medical Center.

• Enhanced the reputation of the burn injury program established by B.E. Zawacki at LAC+USC.

• Helped to lay out the vision for the purchase of USC University Hospital and the USC Norris Cancer Hospital.

Reflecting on his time at USC, DeMeester said he is grateful that he had the opportunity to impact the campus in a positive way and to contribute to the body of knowledge on esophageal disease. His accomplishments in the latter resulted in receiving honorary degrees from four European universities.

“I felt that I pushed the science of esophagology forward. The world is richer in understanding esophageal diseases and USC has allowed me to do this,” he said.

He also encouraged the USC Health Sciences community to focus on its primary mission—educating future physicians and creating an environment of joy.

“A lot of places can do research, but only a medical school can produce a physician,” he said. “If we can keep that focus and select the best students and faculty, USC will reach great heights.”