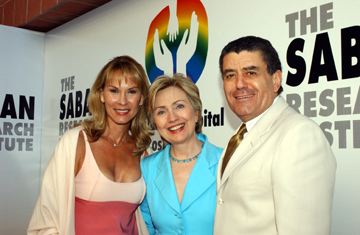 Media mogul Haim Saban and his philanthropist wife, Cheryl, have pledged $40 million to Childrens Hospital Los Angeles (CHLA), which officials there called the largest single gift of its kind to a children’s hospital in North America.

The gift is one part of charitable commitments worth $100 million to health care and education in the United States and Israel that the couple announced on June 22.

The Sabans’ gift to CHLA is designed to stimulate pediatric medical research and advance the search for solutions to some of the most complex and vexing medical issues affecting children and adolescents.

“Childrens Hospital Los Angeles is able to make a difference in the lives of children and their families, not only in Los Angeles but throughout the United States and around the world because of people like Cheryl and Haim Saban,” said CHLA President and CEO Walter W. Noce Jr.

U.S. Senator Hillary Rodham Clinton (D-NY), other elected officials and special guests joined members of the CHLA Board of Trustees on June 29 at the hospital to rededicate its internationally known Research Institute of Childrens Hospital Los Angeles, and the new 88,500 square-foot, state-of-the-art research laboratory facilities as the Saban Research Institute building.

The Saban commitment is the lead gift in the recently announced $500 million campaign for CHLA. Cheryl Saban was the first member of the CHLA Board of Trustees to make a commitment to the campaign, pledging $1 million when trustees met in April 2000 to consider the feasibility of a fundraising drive for new facilities, as well as for endowment, program and annual support.

“Haim and I are thrilled to be able to make this level of commitment to Childrens Hospital Los Angeles, especially to further medical research, which is too often under-funded and is so critical to the continued well-being of all children,” said Cheryl Saban, a children’s advocate who has been a member of the CHLA Board of Trustees for seven years, and is a member of the Los Angeles City Commission for Children, Youth and their Families.

“We believe there is an extraordinary opportunity here to invest in scientific discovery at Childrens Hospital, making a significant difference in the rapidly changing world of medical research, with the emphasis on finding better ways to treat, prevent and cure pediatric illness and injury,” she said.

Haim Saban, chair and CEO of the Saban Capital Group Inc., a private investment firm, and a leading philanthropist, added, “Cheryl and I have decided to mobilize our personal resources to positively impact the healthy development of children and their families through research, education and services.

“We believe that advances in research, which ultimately will help millions of children worldwide, will be possible through this partnership with the physician-scientists at Childrens Hospital,” he said.

The gift from Cheryl and Haim Saban and the Saban Family Foundation is expected to dramatically advance scientific investigations at the Saban Research Institute, which is engaged in pediatric research in crucial areas such as cancer, cardiovascular research, developmental biology, infectious diseases, bone metabolism, imaging research, diabetes, community health and gene, immune and stem cell therapy.

“This gift comes at the ideal time as plans for a major expansion of our research efforts are under way,” said Yves A. DeClerck, vice president of research and director of the Saban Research Institute. “We are deeply appreciative of the Saban family’s generosity, foresight and support of our vision.” DeClerck is professor of pediatrics, biochemistry and molecular biology at the Keck School.

Cheryl Saban, chairwoman of the Saban Family Foundation, is deeply committed to improving the quality of medical care and providing much- needed resources to educational organizations around the globe.

In 1999, Saban, an author who holds a master’s degree in psychology, established 50 Ways to Save Our Children, a not-for-profit organization encouraging philanthropy and community service, and since then, he has published a related book and launched a Web site (www.50ways.org).

Haim Saban is the former co-owner, chair and CEO of Fox Family Worldwide Inc. and founder of Saban Entertainment, which produced successful children’s television programs and films such as Mighty Morphin Power Rangers.

Saban is a regent of the University of California and a member of the Board of Trustees of the Brookings Institution.

The Saban Research Institute of CHLA is the largest and most productive pediatric research center in the western United States, with 86 investigators at work on more than 200 laboratory studies and clinical trials. It is one of the few freestanding research centers in the nation to combine scientific laboratory inquiry with clinical care dedicated exclusively to children and adolescents.

Scientists at the Saban Research Institute are engaged in seeking new therapeutic approaches to childhood cancer, finding ways to correct the function of abnormal genes through a combination of gene therapy and cell therapy and seeking insight into the molecular control of organ development.

Other areas of investigation include advancing research in tissue engineering, harnessing the power of digital imaging to provide better ways to monitor the benefits of new therapies and seeking new ways to prevent and manage diabetes.

Its scientists are engaged in new scientific initiatives that will probe the functions of the brain to address the most vexing pediatric brain diseases and injuries, as well as studies that target the child, family and the community to ensure that children grow and mature into healthy, productive adults.

Sabans give $40 million to CHLA for pediatric research