Pop psychologists tout a balanced life as a key to mental health, and they may be more right than they realize. USC neuroscientist Dion Dickman is gaining insight into how the brain maintains healthy balance on a cellular level, work that may have implications for neuropsychiatric diseases such as schizophrenia. 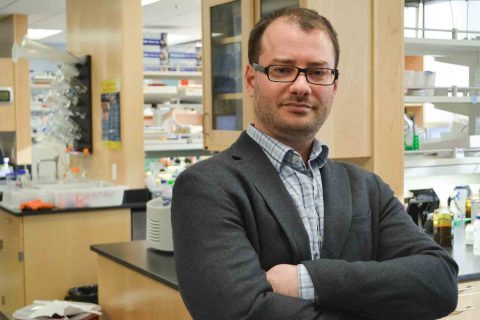 Nerve cells, called neurons, communicate with other cells via synapses — minute gaps between the neuron and the cell receiving the signal.

“When you learn, some synapses are thought to become stronger, and that’s how you encode a memory,” said Dickman, assistant professor of biological sciences at the USC Dornsife College of Letters, Arts and Sciences. But there’s an upper limit to how much signal strength neurons can tolerate.

“Synapses have a range of normal activity. They can be a little bit weaker or a little bit stronger, and that gives you the flexibility to learn and remember and change,” Dickman said. Transmit too little signal, however, and the connection is lost. Or if it gets too strong, the risk of seizure looms.

When you learn, some synapses are thought to become stronger, and that’s how you encode a memory.

The process of keeping a synapse in the normal range is called homeostatic synaptic plasticity. Dickman likens this process to the way the body maintains a normal temperature that hovers around 98.6 degrees Fahrenheit.

“There is a little flexibility,” Dickman said, “but when you get too far out of the range, mechanisms are triggered that bring the synapse back to its normal set point.”

If you look at the brain of someone with schizophrenia, you would never be able to see a major physical difference between it and a normal brain.

“If you look at the brain of someone with schizophrenia, you would never be able to see a major physical difference between it and a normal brain. There’s something much more subtle than just mass cell death giving you these really remarkable changes in cognition.”

That subtle, even invisible issue may be the failure to keep a synapse in the normal range in systems using glutamate as a neurotransmitter. Previous research has, in fact, linked the process to schizophrenia.

In work published in Science in 2009 and another study published with first author and USC Dornsife graduate student Beril Kiragasi in June 2017 in Cell Reports, Dickman studied synapses in fruit flies and identified receptors in the presynaptic neuron — the one sending signals — that contribute to maintaining homeostatic plasticity.

In a more recent study published in November 2017 in Cell Reports and also using fruit flies, Dickman and USC Dornsife graduate student and first author Pragya Goel looked at the receiving cell and found that three different pathways contribute to the process.

Diving in further, Goel and Dickman discovered that while those three postsynaptic pathways are triggered by different factors, they all eventually converge on a single control system that enables the balancing effect of homeostatic plasticity. This gives the cell flexibility in coping with different stimuli without being overwhelmed by too many conflicting signals.

Dickman compares this mechanism to a thermostat in an office. Some people might feel it’s too cold and clamor for heat; others might feel it’s too hot and call for cooler air. Rather than everyone turning the thermostat up and down at their individual whim, one person can act as a gatekeeper and find a temperature somewhere in the middle that best satisfies everyone’s needs.

The postsynaptic neuron may be receiving signals affecting all three pathways, but each eventually funnels down to the single pathway that affects homeostatic synaptic plasticity.

The discovery of this system may have important implications for future therapies. Researchers might develop drugs that aim to control one of the three pathways or just the central pathway in the postsynaptic cell. Or more directly, they might try controlling the amount of glutamate released from the presynaptic cell, Dickman noted.

“It’s tricky to do it therapeutically, but I think conceptually there are some possibilities,” he said.

About the research studies

The work was supported by the National Institutes of Health under award NS091546 and research fellowships from the Alfred P. Sloan, Ellison Medical, Whitehall, Mallinckrodt and Klingenstein-Simons foundations to Dickman as well as a USC Provost Graduate Research Fellowship to Goel and a USC Women in Science Fellowship to Li.

Wiring is frayed in more than just one region, according to a new international study — the largest analysis ever of white matter among people with a psychiatric disorder.

How people with schizophrenia stay productive and manage symptoms

Genes and pathways identified by the international study could inform new approaches to treatment.

Characterized by hallucinations, delusions and gross disorganization of thought and speech, schizophrenia is a chronic, severe and disabling brain disorder.

How the brain maintains moderation could offer answers to schizophrenia, other diseases