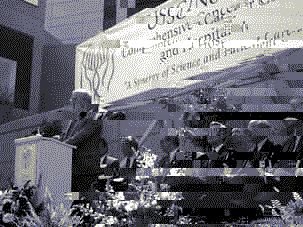 President Steven B. Sample presided over the ribbon-cutting ceremony, joined by USC Chancellor Emeritus Norman Topping, for whom the new Tower is named.

More than 500 people attended the opening of the center, which is one of only two National Cancer Institutes designated “comprehensive cancer centers” in Southern California.

The eight-story tower includes patient-care facilities as well as research laboratories and offices, and will bring together clinicians, scientists, and cancer prevention specialists in an atmosphere of close collaboration.

The state-of-the-art design of the labs is a model for the future of medical research.

Aside from 25 new labs devoted to cancer research, the Tower includes a unique 10,000-square-foot meditation garden-one of only a handful in the country.

The new tower is located at the corner of Biggy Street and Eastlake Avenue.