Motivating the average energy-filled 5-year-old to read can be a challenge.

Some parents try handing out rewards like cash or candy, and teachers may give out gold stars or toys — but that can backfire when the incentives disappear and the schoolwork remains. So to keep its young participants engaged, USC’s Kinder 2 College program embraces an unconventional approach.

“It’s not like normal school,” said Elian Herrejon Vazquez, a fifth-grade student who attends the community program on USC’s University Park Campus twice a month on Saturdays. “They’ll put a question on the board and we write about it, but we also get to play around and watch videos.” 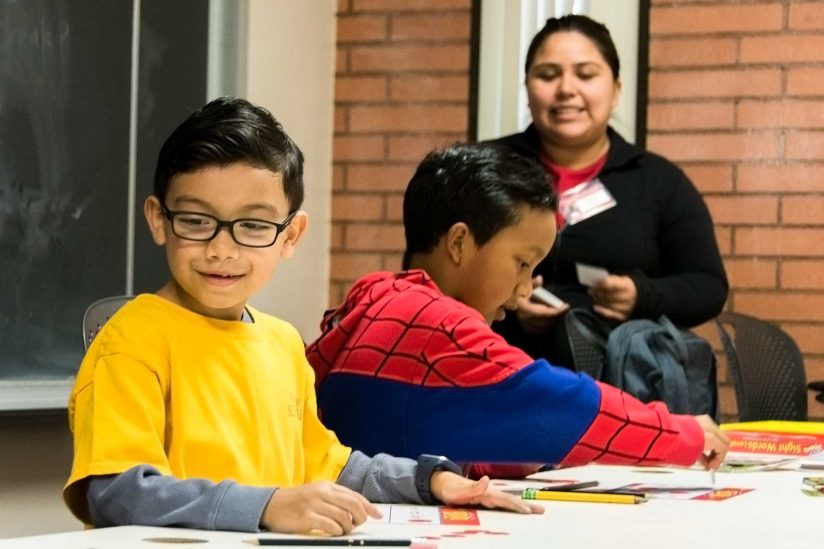 The initiative, which promotes literacy among children aged 5 and older from the USC Family of Schools, uses game-based learning interspersed with physical activities to prepare students to excel in reading, writing, math and science. Boosting literacy early is a crucial to ensuring future success, given evidence showing that children who struggle with reading and writing by third grade are more likely to drop out of high school.

The program strikes a delicate balance — providing occasional rewards like outdoor play time — as it builds on the natural curiosity of children by using kid-friendly subjects like supervillains and sports to make learning fun.

That blend of action and education is proving successful. Launched in 2011 with just 30 students, the popular program will enroll more than 200 children this spring. It recently started providing afterschool tutoring support in four South Los Angeles elementary schools near USC. Its growth is in large part thanks to support from USC’s Good Neighbors Campaign, which is funded by donations from USC employees, and a critical $1 million gift from philanthropist Pamela Buffett.

On a recent weekend, dozens of children clad in gold shirts with cardinal lettering dashed around McCarthy Quad at USC, playing catch and sharing snacks before ducking into nearby classrooms to play word bingo, read superhero-themed books or write about natural disasters.

Sean Taitt, Kinder 2 College’s program director, said the curriculum is designed to appeal to various learning styles, such as videos and colorful reading materials to engage visual learners. He encourages participants to lie down on the floor or take a quick break to run around the building before getting back to work.

As adults, we sometimes forget what kids go through.

“As adults, we sometimes forget what kids go through,” he said. “They experience an immense amount of stress and struggle. We encourage an open discourse about feelings and emotions. Many times, those discussions need to happen before scholars can focus on classwork.”

Herrejon Vazquez described how Kinder 2 College keeps him engaged by focusing on interesting topics. During a recent session, the 10-year-old jotted down his thoughts on one of his favorite activities, soccer, in a journal after watching a short video about the popular sport.

In addition to enhancing his reading and writing skills, particularly his handwriting, he said the program is setting him up for success.

“In the two years I’ve been here, it’s been great. I like how they put together this group of people who come to help us have a better future,” he said. “I like everything about it.”

Asked about his plans for the future, Herrejon Vazquez said he envisions being a doctor in the military, helping injured soldiers returning from the battlefield. He also hopes to return to Kinder 2 College when he is older to offer his support as a volunteer.

His classmate, Danny Moreno, echoed those sentiments. He has also seen his handwriting and grades improve since joining the program.

My mom says that if I do good here, I could go to college when I grow up.

“My mom says that if I do good here, I could go to college when I grow up,” he said. He still hasn’t decided on a career path, but among his top choices are video game maker, DEA agent, artist or singer.

Another fifth-grade student, Ester Mijangos, has attended Kinder 2 College for four years. Her mother encouraged her to try it out after seeing how much it helped her younger brother with his regular schoolwork.

“My mom is happy because we are getting a better education,” she said. “We write about something new every week — I usually write two pages or more. It’s fun and it helps me learn.”

During a recent Saturday session in teacher Jose Perdomo’s classroom, second-grade students sprawled out on the floor to play with engineering and construction toys. They had started out the day with a quick meditation circle, talked about community heroes like firefighters and policemen and completed an interactive writing exercise about animals they saw as heroes. 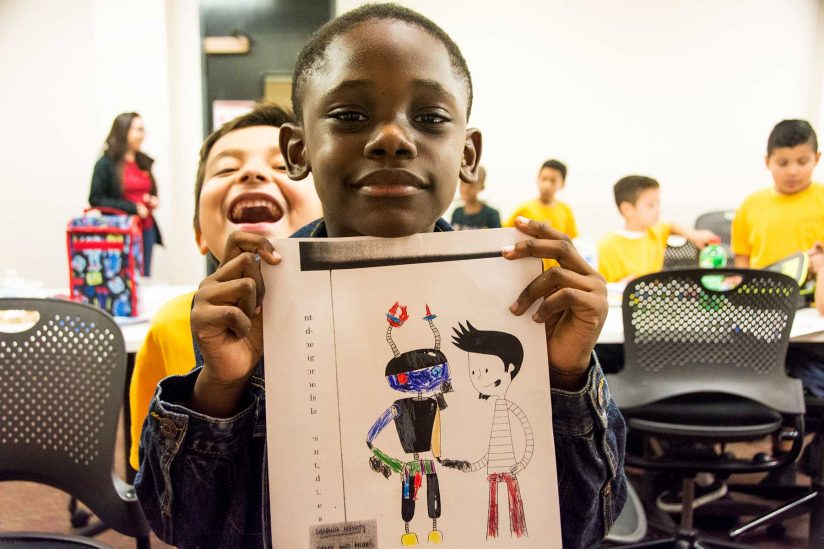 Many of his students are gifted and eager to go beyond the lesson plan, Perdomo said. He is more than happy to praise them for their efforts.

“It’s a smaller class size compared to elementary school, so we get to focus a little more on what they need, getting that one-on-one attention,” he said. “All of these kids have the potential to succeed, and I’m very fortunate to be able to help them.”

A junior at USC who is studying political economy and sports media, Perdomo hopes to become a teacher after completing his degree. He is already looking into certification programs, including Teach for America and a fellowship program for aspiring teachers in Los Angeles.

He is especially attuned to the needs of local children, having grown up near USC and participated in the university’s signature college prep program, USC’s Neighborhood Academic Initiative. In fact, many of the mentors at Kinder 2 College are current or former NAI scholars.

“This is something I always wanted to do, to give back,” Perdomo said. “I cherish every moment that I’m here.”

Another NAI graduate, Daniel Novoa, has worked at Kinder 2 College since his senior year of high school. He can relate to many of the children in his class who might struggle in a strict learning environment. As a youngster, Novoa often got in trouble at school for being too rambunctious and would be disheartened by stern reprimands from teachers.

“Here, it’s more relaxed. They can have fun but still learn and not worry about getting yelled at because they are energetic,” he said. “As long as they are learning, I’m completely fine with them being excited.”

A Kinder 2 College mentor since the beginning of the program, Novoa recently celebrated the graduation of the initiative’s first cohort, now in sixth grade. He’s seen many of his students make significant progress, such as one student who was too shy to introduce himself to the class on his first day but became one of the program’s most confident scholars within a semester.

“I’ve seen them grow so much,” Novoa said. “People ask me why I want to come in and work with kids. It just feels good to be able to give my time to someone else and help them out.”

In addition to Saturday sessions and afterschool support for children, Kinder 2 College offers an academy for parents to discuss issues like health, bullying and socioemotional well-being. Taitt, who earned his master’s degree in social work at USC, also connected with speech pathology experts at his undergraduate alma mater, California State University, Northridge, and now children in the program can receive free screenings for speech impediments and other language issues.

Because the initiative is funded by philanthropic support, Taitt said additional goals like expanding to the community around USC’s Health Sciences Campus depend on continued growth in donations. But that isn’t keeping him from dreaming big; he envisions one day establishing similar programs at other universities.

“It’s more important than ever that we continue to invest in our children,” he said. “Education is one of the most effective ways to help kids get further in life.”

USC’s Kinder 2 College program helps children from surrounding neighborhoods to become proficient in reading and writing by the end of third grade.

Centers throughout the brain work together to make reading possible

A combination of brain scans and reading tests has revealed that several regions in the brain are responsible for allowing humans to read.

James “Jimmy” Reese ’46 is a busy man. On a recent day, he did some early stock market trading, arbitrated a dog bite case and set up meetings for a new education intervention program administered by USC.