The explanation for how people learn complex behaviors, such as speech, might be found in a new study of songbirds by scientists at the USC Dornsife College of Letters, Arts and Sciences.

“One hypothesis to explain speech development is that the sound of each word creates a memory or template in the brain,” said Sarah Bottjer, a professor of biological sciences and psychology at USC Dornsife and an author of the study. “That template becomes the internal recording a baby uses, as its goal, to say the word.” 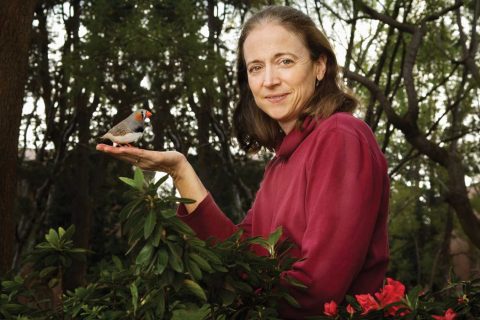 When attempting to say a word, a baby’s brain may compare the sound it utters to the brain’s template of that word. The outcome of that evaluation may be relayed to neural circuits responsible for generating motor commands (mouth movement and breathing) to produce sound. When the sound is a match, the neural circuitry to make that sound is strengthened. When it’s not, it’s recognized as an error that corresponds with an attempt to correct the neural circuitry.

“Songbirds offer a powerful experimental model for studying the neural mechanisms that underlie motor-skill learning since we can implant electrodes into their brains and record the activity of neurons in juveniles as they practice ‘babbling’ sounds. In this way, we can track changes in neural activity as learning progresses.”

Researchers recorded neurons in a distinct portion of their brains, a part of the cortex that is inter-connected with the basal ganglia, which is located in the center of the brain. Cortical-basal ganglia circuitry is key for learning motor skills, particularly those that become highly practiced habits. That’s one of the reasons basal ganglia are related to conditions such as obsessive-compulsive disorder, addiction and Tourette’s syndrome.

The finding is exciting because it provides a rare example of changes in neural activity that correspond with behavioral attempts to achieve a mental goal.

“The finding is exciting,” Bottjer said, “because it provides a rare example of changes in neural activity that correspond with behavioral attempts to achieve a mental goal; in this case, to produce vocalizations that mimic the memory of a sound. The findings offer key insight into the brain’s learning process.”

Perhaps the way people learn a tennis serve, or how to make other precise skilled movements, can be explained by the same process. Bottjer said she plans to conduct more research to address that question.

The study’s lead author is Jennifer M. Achiro, with contributions by John Shen, both graduate students at USC Dornsife.

USC scientists have discovered a population of neurons in the brains of juvenile songbirds that are necessary for allowing the birds to recognize the vocal sounds they are learning to imitate.

Does Music in Speech Equal Empathy in Heart?

Some people are annoyed by upspeak: the habit of making a sentence sound like a question? But actually, being able to change intonation in speech – as in upspeak – may be a sign of superior empathy?

Songbirds may hold the key to how babies learn to speak