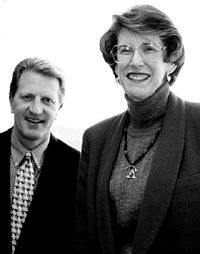 “These are two of our most distinguished faculty,” Ryan said, “and they are two of our busiest faculty as well. We are very fortunate that they are willing to assume the significant additional burdens that these offices entail.

“It is my strong belief that having active faculty members engaged in the administration of the medical school, particularly in these two critically important leadership positions, will insure that we retain close lines of communication with faculty and students as we go forward together.”u0000

Dunnington’s appointment, Ryan said, demonstrates the continuing importance that he and provost Lloyd Armstrong Jr. have assigned to addressing the needs of medical and graduate students in the medical school.

“Our students are very much aware of the pressures on the nation’s medical schools,” Ryan said. “It is my belief that Gary Dunnington will serve both as a role model and as a catalyst for assuring that the voices of our own students are heard as we restructure our school for the next century. He has demonstrated great leadership qualities and a passion for education.”

Bernstein’s appointment, according to Ryan, reflects the high priority the university places on the crucial role that faculty at all levels play in the life and future of the school.

“Leslie Bernstein has proved time and time again that she is a brilliant scientist and scholar, and also someone attuned to the needs of her colleagues,” Ryan said. “She will provide leadership to our faculty and access to the planning process, both essential if we are to assert ourselves as a major, positive force in the future.”

As the medical school passes through a period of crucial importance to the university, Armstrong said, “the appointment of two such highly qualified individuals augers well for the success of our planning process. I know we can count on them to make major contributions to the restructuring effort.”

Dunnington replaces Garell, who resigned as associate dean when he became chair of the Department of Pediatrics.

“Dale set very high standards for us to follow,” Ryan said. “That made the task that [interim dean of medicine Joseph P.] Van Der Meulen and I had of finding his replacement very difficult. Fortunately, we had many talented individuals who were willing to serve.”

Bernstein will continue as principal investigator on her many grants in the Department of Preventive Medicine. “She is one of the best-funded investigators in the entire university,” Ryan said, “which is a reflection of her world-class research.”

Because they will continue their “day jobs,” Ryan said the new deans will maintain an outcome-oriented focus, spending as little time as necessary on administrative matters.

“I have great confidence in these two energetic colleagues,” Ryan said. “They will become even stronger leaders in our school by keeping their fingers on its pulse.”

Both new deans will work primarily with Van Der Meulen, the school’s interim dean, but in the weeks ahead will involve themselves in the planning process that Ryan is conducting.u0000

“I’d like for us to approach medical education with the same scientific rigor with which we approach research,” said the new dean, who is also an associate professor of surgery and director of the USC/Norris Breast Center.

Dunnington’s new responsibilities will include coordination of medical-student education, admissions and clerkship programs.

Currently director of the Department of Surgery’s residency and clerkship programs and vice chairman for the department’s educational affairs, Dunnington is familiar with the intricacies of physician education on the Health Sciences Campus.

He is also a distinguished voice in the field of medical education nationwide. Each year, Dunnington is one of five surgeons to teach a weeklong course for the American College of Surgeons on the subject of improved surgical education. The course is presented to a select group of program directors and department chairs.

Ultimately responsible for virtually every issue related to medical student education, Dunnington said that in his new job he’d like to increase the amount of contact time between faculty and medical students while emphasizing faculty development.

He has been responsible for restructuring surgical clerkships at USC and two other universities, and feels prepared to take on the challenge of supervising clerkship programs across a range of specialties.

“I learned a great deal in those efforts, including how to design a program that fits an institution’s educational climate,” he said.

Dunnington said he looks forward to working with students and faculty alike in guiding the School of Medicine along its current route to reorganization.

“Students are excellent judges of what faculty can do to enhance learning,” he said. “I have no plans to change my strong advocacy role for the student body.”

While his new position will certainly be a priority, Dunnington said he also plans to continue in his role as director of the USC/Norris Breast Center and to keep up his clinical practice in surgical oncology.

Leslie Bernstein, professor of preventive medicine and newly appointed senior associate dean for faculty affairs, looks forward to her new job with a healthy mix of enthusiasm and determination.

“I was surprised at the job offer,” Bernstein said, “but I’ve always wanted to be involved in administrative activities at the medical school. I hope my insight as an active faculty member will have some effect on the restructuring of the medical school,” she said.

To familiarize herself with faculty members and their greatest concerns, Bernstein plans to devote two lunch hours a week to informal meetings. “I hope they’ll drop in and talk with me about whatever they want to,” Bernstein said. Such meetings will also help Bernstein define priorities for her new position.

In addition, she plans to meet with representatives from each department, in order to understand the concerns of basic science faculty, clinical instructors and special appointees such as research professors.

“We need to see if there are solutions that work for everybody,” she said, referring to questions regarding budget cuts and faculty tenure.

Dealing with upcoming changes in USC’s contractual agreement with Los Angeles County will most likely be at the top of Bernstein’s agenda, since budget cuts and faculty restructuring promise to provide early and difficult challenges.

“We need to make sure that changes in procedure are made in a fair and equitable manner,” she said. Bernstein will also be responsible for decisions regarding sabbatical leaves, grievances and faculty rights and privileges.

In all of these regards, Bernstein will work closely with Bill Strippoli, associate dean for administration and faculty affairs. Strippoli – who also serves as special assistant to the interim dean of the School of Medicine – will continue to deal with a variety of faculty-related issues while serving as an additional resource during the restructuring.u0000

Bernstein is no stranger to faculty and student affairs. She has served on a variety of administrative and advisory committees, both at the medical school and at the University Park Campus.

As a distinguished cancer epidemiologist, Bernstein currently serves as scientific director for the Los Angeles Cancer Surveillance Program. Her research focuses on the epidemiology of breast cancer, and she is principal investigator of one of the largest case-control breast cancer studies in the United States. She has recently begun an offshoot study designed to investigate potential connections between breast cancer and pesticide residues in the blood of African-American women.

Bernstein’s career at USC began as a graduate student in 1976. She earned her master’s degree in 1978, and her Ph.D. in biometry in 1981. She has been working at USC ever since.

USC in the News