For as long as he can remember, KUSC has been a big part of Owen Dupuy’s life — almost all 13 years of it.

The station’s classical music often plays in the background as the Irvine teenager does his homework, eats dinner with his family or drifts off to sleep. So when he heard some of his favorite KUSC announcers, like Alan Chapman and Jim Svejda, asking for pledges from listeners, he knew he had to act.

“It’s important to keep this type of great music on the air, so during the membership drives, they need our support,” he said. “Remember, the station gets about 75 percent of its total operating budget from people like me.”

He pestered his parents to contribute. “I think he must have asked us for two days straight,” his mother, Sue Dupuy, added. “He finally said, ‘Mom, this is really the last day, we have to do it now.’”

The young teen dipped into his allowance and gave $20, although he is quick to point out that he waited until a matching challenge to ensure that his support was doubled.

Dupuy’s encyclopedic knowledge of all things KUSC — he rattles off the titles and air times of various shows without a second thought — bowled over employees during his recent tour of the station. It prompted Chapman to proclaim him KUSC’s “biggest 13-year-old fan.”

But he isn’t the only youngster who has been inspired to donate to the radio station. During every membership drive, dozens of pledges come in from children who want to make a contribution. It’s an encouraging sign for station leaders, who hope to build a new generation of listeners who appreciate classical music.

Not only are they listening — which in itself is a thrill — but they feel a connection to the station and want it to succeed.

“Not only are they listening — which in itself is a thrill — but they feel a connection to the station and want it to succeed.”

In recent years, the station has made a concerted effort to build up its engagement efforts with children and local communities, including initiatives like collecting lightly used instruments from listeners to donate to public school and afterschool music programs in need.

A recent event called KUSC Kids Discovery Day brought thousands of children to the Natural History Museum of Los Angeles County for live performances by artists from LA Opera and the USC Thornton School of Music, interactive musical games and ukulele lessons. In addition to planning a return to the museum in April 2018 for a similar event, KUSC is holding “playground popup” concerts — bringing live shows to local public elementary schools.

“We definitely want to spark some excitement about live performance, and perhaps an interest in playing music themselves,” Eichenthal said. “If you haven’t had any access to classical music, it can be foreign and scary and intimidating. We really want to try to knock down those walls.”

All the right notes

One young fan who doesn’t need any encouragement when it comes to classical music is Benjamin Roberts. Before leaving the driveway with his dad in Calabasas to head to school, the 5-year-old has the opportunity to pick a radio station, and more often than not, he flips the dial to 91.5 FM. 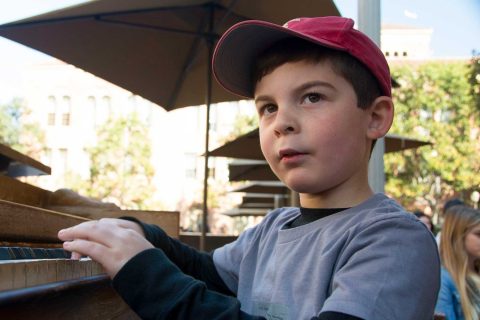 On one occasion, his father had to take a call while on the road, and when he hung up, Benjamin exclaimed that the station had played a piece by Tchaikovsky. His passion for the genre became apparent as he showed off a book featuring 12 top composers and recited their full names, even though the cover only lists their surnames.

“The more classical music I’ve heard, the more interesting it sounds,” he said. “Some of it is kind of wild and crazy and gets me really excited, and some of it is really calm.”

It’s thrilling for Matt Roberts, Benjamin’s father, to listen to his son describe his favorite classical pieces — Mozart’s Symphony No. 41 and Beethoven’s Für Elise. His own father often listened to KUSC or classical music CDs on the drive to school when he was a boy, so it feels like he is continuing a family tradition.

“It’s a beautiful thing to pass this on to my son like my dad passed it on to me,” he said. “What’s also great about this whole experience is that it was never forced on him. It was just sort of organic, and he gravitated toward it quite naturally.”

The Roberts family had a recent opportunity to tour the KUSC studios, and Chapman even had Benjamin record a short message to play during an upcoming pledge drive. The recording ended up on the air a few weeks later, prompting calls from friends and family who happened to hear a familiar voice encouraging listeners to support the station.

Chapman also had Owen Dupuy try out the microphone and headphones during his visit, and the 13-year-old was a natural. He quickly launched into a story about how his family first started listening to the station to lull his older brother to sleep when he was a baby. Sue Dupuy and her husband, Roger, had tried everything to calm down their wailing infant, but nothing worked.

“My dad thought for a moment, then flipped a switch,” Owen said. “It was some German opera on KUSC, and that’s what finally made him calm down and go to sleep.”

Academy Award nominees — and an acclaimed violinist — sit down for chats with host Jim Svejda.

The app celebrates Southern California lifestyle through landscapes and architectural details as the station’s music streams 24/7.