The Nanjing Massacre Memorial Hall in China today debuted its permanent exhibition of New Dimensions in Testimony — interactive survivor testimony technology developed by USC Shoah Foundation — The Institute for Visual History and Education.  The event marks the 80th anniversary of massacre in Nanjing.

This is the first permanent museum exhibition of New Dimensions in Testimony, or NDT, outside the United States and the first exhibit anywhere featuring the Mandarin-language testimony of Madame Xia Shuqin, a survivor of the massacre as a child. She is the only non-Holocaust survivor who has been interviewed for NDT.

“With the partnership between USC Shoah Foundation and the Nanjing Massacre Memorial Hall, Madame Xia’s story is brought to light through New Dimensions in Testimony,” said Yi Huang, president of the Tianfu Bank, which funded the creation of the testimony with the Tianfu Group. “Madame Xia will continue to educate, to inspire and to preserve memory of the atrocities of the Nanjing Massacre for future generations so people around the world will learn from history long after the survivors are gone.”

The exhibit is part of the newly reconstructed Nanjing Massacre Memorial Hall. NDT uses groundbreaking natural-language software to allow audiences to interact with the recorded image of a genocide survivor, who responds to questions in real time. The testimony is powered by complex algorithms that provide realistic conversation. 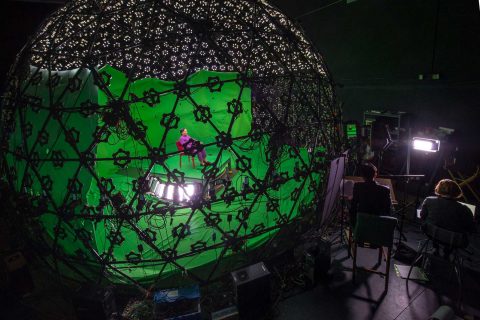 The New Dimensions in Testomony exhibit allows audiences to interact with survivors such as Xia Shuqin. (USC Photo/Gus Ruelas)

Xia traveled to Los Angeles in October 2016 to be interviewed by Cheng Fang for the NDT interview. Fang, a  2014 USC School of Cinematic Arts graduate and USC Shoah Foundation research fellow, interviewed her over five days on a 60-degree “light stage” at the USC Institute for Creative Technologies. High-definition cameras and lights captured the interview from all angles as Xia answered numerous questions about her life before, during and after the massacre.

Xia was 8 years old when Japanese soldiers stormed into her family’s home on the morning of Dec. 13, 1937 and murdered 11 of the 13 people in the house — Xia’s parents, grandparents and siblings as well as neighbors. Only Xia and her 4-year-old sister survived. About 300,000 civilians and unarmed soldiers were killed over the course of two months during the 1937 massacre.

When I first saw a demonstration of New Dimensions in Testimony with a Holocaust survivor, I quickly understood how important it would be to bring the technology to the people of China.

Hao Wu, president of China Tianfu, said: “When I first saw a demonstration of New Dimensions in Testimony with a Holocaust survivor, I quickly understood how important it would be to bring the technology to the people of China. A lot of people worked hard to make this happen, but without the generous cooperation of Madame Xia, this would not have been possible.”

The people who first imagined the possibilities of creating something as advanced as NDT are thrilled to see it reach fruition.

“It’s incredible to see how far this has come in just a few short years,” said Heather Smith-Maio, who came up with the concept for NDT. “Madame Xia’s important life story will now be able to inspire people across China — and the world — long into the future.”

Somber ceremony includes Russian, French presidents and dignitaries from around the world.

Nanjing Massacre testimonies to be archived at USC

USC Shoah Foundation-The Institute for Visual History and Education and Nanjing Massacre Memorial Hall have embarked on a historic effort to preserve the testimonies of the last survivors of the 1937 Nanjing Massacre.

Stephen Smith and other Trojans help to commemorate the atrocity that claimed thousands of lives.