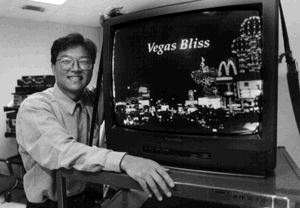 Anthropology student Young-Hoon Kim, with his video, Wedding Bliss. The Korean native was fascinated by the American custom so different from the formal weddings of his own country: “Anthropologists always study ritual. It’s a window on the larger themes of a culture. In studying weddings, you should be able to understand how people view love, commitment and family.”

Kim knows whereof he speaks. The Korean foreign student spent most of the past five years researching Las Vegas wedding chapels, preparing what he believes is the first scholarly treatment on the subject.

In all, Kim estimates that he has heard 1,000 “I do’s” on the Las Vegas strip. He’s seen weddings where the bride and groom wore T-shirts and jeans, weddings where the officiating minister was an Elvis impersonator, weddings conducted by a former hit man and countless spur-of-the-moment weddings. The anthropologist has even witnessed a literal twist on “taking the plunge”: Kim watched a couple exchange vows before bungee-jumping from a platform in a casino parking lot.

His findings fill a 16-minute video, titled Wedding Bliss, and a 200-page dissertation on a ritual that sheds light on American

attitudes toward love, family and commitment.

Far from being an endangered species, weddings are Las Vegas’ second largest industry after gambling, Kim found. Sin City’s 40 wedding chapels – 25 of which are located on the three-mile strip – each year pump an estimated $100 million into the local economy.

Between 1987 and 1994, weddings in Clark County, which includes Las Vegas, nearly doubled, rising from 52,415 to 99,727, according to Kim. He reasons that most of these nuptials took place in wedding chapels.

Credit for the surge lies partly with new marketing approaches. In recent years, casinos and hotels, which used to keep their distance from the wedding industry, have added in-house chapels. Chapels have also started promoting themselves better with toll-free numbers and listings in out-of-state telephone directories.

“If you look up ‘Wedding’ in the Yellow Pages in Wisconsin, you’re likely to find a Las Vegas chapel,” Kim said.

But the most important factor, the anthropologist notes, is a trend toward more private weddings and toward smaller, practical weddings in response to the “post-industrial lifestyle.”

“Outside of the rich, most people can’t afford big weddings,” Kim said. “But they still cherish the idea of a [traditional] marriage as promoted by the wedding industry. In Las Vegas, you can get a close facsimile.”

A Las Vegas wedding and license can be had for as little as $100. Flowers and a video can raise the price to $300; champagne and music further inflate the cost.

An Illinois couple featured in Wedding Bliss estimated their Las Vegas wedding cost $2,500 to $3,000, including their airfare and honeymoon. By contrast, a formal wedding at home would have cost “$15,000, easy,” the groom said.

Couples also like being able to tailor their ceremony.

“They kept emphasizing, ‘It’s my wedding, I don’t care what others say,'” Kim said. “In other cultures, you see the involvement of the whole community, which validates the union.”u0000

The highlight of Kim’s research was the two months he spent studying the strip’s most popular wedding mill, the Candlelight Wedding Chapel. There, he witnessed a 24-hour marriage marathon, with six ministers working staggered shifts.

The founder of the Candlelight Wedding Chapel- the flagship in a three-chapel chain – is a former vacuum cleaner salesman. One minister is a former hit man, with a gunshot wound to prove it. Another minister – Jim Hamilton – portrayed himself in the 1992 film Honeymoon in Vegas, a good-natured spoof of the industry. Hamilton is also featured in Wedding Bliss.

In Kim’s video, Hamilton has so thoroughly memorized his routine that unconsciously he mouths the responses of the bride and groom.

On his first day at the Candlelight Wedding Chapel, Kim sat through 48 weddings. He’s lost track of the number of times he’s heard Kenny G’s “The Wedding Song,” the tune Candlelight includes in a standard ceremony.

“Sometimes I had to leave the place to refresh myself,” Kim said. “I’d gamble.”

But Kim’s endurance doesn’t, uh, hold a candle to those of the chapel. It averages 200 weddings a week – which works out to between 9,000 and 10,000 weddings a year. Candelight’s record for the most weddings in one day was 350 – that was on Valentine’s Day in 1988, which fell on a Saturday. “Four ministers were working at the same time,” Kim said.

In his research, the anthropologist uncovered a long list of quirky facts about quickie weddings. Who would guess, for example, that:

* the most popular time to marry in Las Vegas is between 4 and 6 p.m.? People like to have a celebratory dinner afterwards, Kim explained.

* the most popular day of the week is Saturday? Getting married on the weekend means couples don’t have to take time off from work.

* one in three couples hails from the Southwest, most from Southern California? It’s a matter of geographical proximity.

* about half of Las Vegas weddings are second marriages? Second-timers like it faster, Kim points out.

* Valentine’s Day is the most popular day for a wedding, followed by New Year’s and Thanksgiving? They fall on a three- or four-day weekend, so it’s easier for people to get away.

Kim isn’t the most likely student of the Las Vegas wedding. He and his Korean-born wife, Kyoungsik Sohn – who met as graduate students at Indiana University – were joined nine years ago in a Seoul Catholic church. The couple’s parents planned every detail of the wedding, which had some 500 guests. The couple took their vows in Western gown and tuxedo and then slipped into elaborate, traditional Korean wedding costumes. Ironically, coming from a culture that puts so much stock in formal weddings prepared Kim to appreciate the Las Vegas approach.

“You need some distance,” he said. “Being from Korea gave me that.”

The anthropologist traces his interest in wedding chapels to his first visit to Las Vegas in 1988.

Four years later, Kim visited again. Staying at Circus Circus, he could look across the street at the Candlelight Wedding Chapel.

On his first morning, he was captivated by the sight of a long line of men and women dressed in jeans – some carrying beer cans – in front of the chapel.

“At first, I was shocked because I thought they were wedding guests,” Kim said. “Then I realized they were the actual couples, and I couldn’t believe it.”

The seeming incongruity of the dress and the ritual, he reasoned, might shed light on American values.

“Anthropologists always study ritual,” he said. “It’s a window on the larger themes of a culture. With puberty rituals, you find the meaning of adulthood. In studying weddings, you should be able to understand how people view love, commitment and family.”

So what does the Las Vegas wedding chapel say about love American-style?

The stripped-down affairs reflect an increasingly casual regard for the institution of marriage, Kim said.

“Most people said, ‘What’s the point of a huge wedding?’ Neither the event nor the union meant that much to them. I definitely felt concerned at times,” Kim said.

Yet Kim doesn’t think that the growing popularity of the Las Vegas wedding reflects a loss of faith in the institution of marriage.

“If people had lost faith in marriage, you should have fewer marriages taking place,” he said. “But people keep trying. The notion of marriage is what has changed. It’s like they expect less of it. The attitude is, if it doesn’t work out, they’ll just get out.”u0000