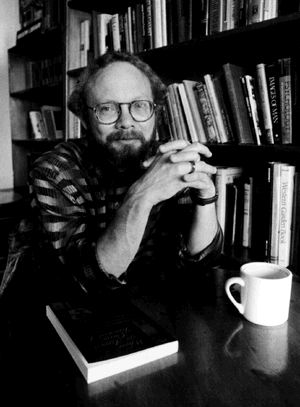 David St. John at the Novel Cafe, in Santa Monica

Contemporary American poetry, St. John counters, is in one of its strongest periods ever – a fact underscored by the Academy of American Poets’ recent decision to designate April “National Poetry Month.”

As further evidence, St. John points to the countless coffee houses that percolate with poetry readings. Or the Academy of Motion Picture Arts and Sciences’ nomination of the Italian film Il Postino (The Postman) for the year’s Best Picture Award. The film is a paean to the transfiguring power of poetry and a loving tribute to Chilean poet Pablo Neruda.

“I think there are more readers of poetry and more variety and diversity in American poetry than ever before,” said St. John, a professor of English and director of the Creative Writing Program.

“Poetry has begun to touch a broad spectrum of readers in this country – from people who go to coffee houses to read poetry to a growing awareness of contemporary poetry in academia,” St. John said.

As if to quiet the nay-sayers, St. John has just published a book of his selected essays and reviews about some of the major contemporary American poets – Philip Levine, Mark Strand, W.S. Merwin, Charles Wright, Gertrude Schnackenberg, Donald Hall, Marvin Bell, Donald Justice, Norman Dubie and the most recent winner of the Pulitzer Prize for poetry, Jorie Graham.

Where the Angels Come Toward Us (White Pine Press, 1995) also includes six interviews with St. John, considered by critics to be one of the most accomplished and innovative of American poets today. Last year, St. John’s most recent collection of poems, Study for the World’s Body: New and Selected Poems (HarperCollins, 1994) was nominated for a National Book Award in poetry.u0000

The mere publication of a book like Where the Angels Come Toward Us is a testament to the growing interest in poetry among Americans. The book is “not just for other poets but for a general audience who wants to know more about poetry and more about what poets consider in their aesthetic choices, as well as the things that concern them when they are writing poetry,” said St. John.

In the interviews, originally published in various literary magazines and journals, St. John talks about his own aesthetic and vision of poetry as art, and candidly appraises the state of poetry today.

“It just astonishes me to read this crap about ‘the fate of poetry’ or ‘the death of poetry’ or all of these endless boring discussions about whether poetry can ‘matter’ or not,” he told Karen Fish in a 1994 interview for the American Poetry Review. “I’m sorry, but I’d rather be reading a book of poetry than reading one of these endless, deadly discussions; they’re what’s killing poetry.”

In an interview for Hayden’s Ferry Review, published in 1993, St. John argues that people who wonder what’s wrong with poetry are completely misguided. “I think it’s tremendously strong. I think the number of terrific poets writing and the variety of poems that they’re writing has never been greater,” he said.u0000

Although he’s optimistic about the state of American poetry, St. John is openly critical of a faction of contemporary poets who have turned poetry into “a kind of mildly inflated journalism.”

St. John critiques a kind of verse, particularly widespread among young male poets, that is “a diary of experience that has not been transformed by language. There is an assumption of self-importance that because the speaker is saying it, it must be important,” he said.

These poets lack a sensibility and consciousness about language. “It rings completely false,” he said. “It’s magnifying the minutiae of their own experience into mythic proportions.”

St. John also complains that too many poets cater to a “talk show mentality,” which permeates American culture. “These poets are not making use of what seems to me one of the greatest potentials of poetry,” he said.

This potential, in St. John’s aesthetic, is the enactment in language of experience. “I believe poetry is an extraordinary art – an art that helps create in language the sense of possibility for the future,” he said.

While he complains about the poets whose language is banal and self-congratulatory, St. John is quick to praise “the many terrific poets writing today.”u0000u0000

Written from the perspective of a career spanning 20 years, St. John’s reviews and essays cover a broad spectrum of poetic styles. The reviews – usually prompted by the release of a new book of verse – each focus on a single poet. St. John often uses the new volume as a springboard for discussion of a poet’s entire opus.

“All of these poets have confronted the difficulties of language and tried to forge for themselves a voice that can endow the world with a reflection of their own sensibility,” St. John said.

For instance, Levine – who won the 1995 Pulitzer Prize for poetry and was St. John’s professor at California State University, Fresno – has spent his life searching for an American voice that could stand in the shadow of Walt Whitman.

Levine’s poem “On The Edge,” written in the voice of Edgar Poe, offers all the elements that St. John finds characteristic of his mentor: “A disenfranchised voice, often American, solitary yet resilient, self-ironic, accusing, compassionate, steadily proclaiming his or her role as observer from the harsh recess of the working world,” St. John writes.

He praises the “extraordinary verbal surge” that Levine musters in the concluding lines of “They Feed They Lion.”u0000

From my five arms and all my hands,
From all my white sins forgiven, they feed,
From my car passing under the stars,
They Lion, from my children inherit,
From the oak turned to a wall, they Lion,
From they sack and they belly opened
And all that was hidden burning on the oil-stained earth
They feed they Lion and he comes.

In another review, St. John praises Charles Wright as one of today’s most formally inventive poets. “The weblike structures of [Wright’s] poems reverberate with his characteristic verbal music, and their individual images seem to radiate through Country Music as a whole,” St. John asserts in a review of Country Music: Selected Early Poems, which won the 1983 National Book Award in poetry.

St. John describes Dubie, another of his favorites, as “one of the most intriguing presences in American poetry.” In an essay first written for The American Poetry Review after the publication of Dubie’s Selected and New Poems, St. John writes that Dubie’s poems “exist at the place of juncture of several ‘realities,’ sometimes historical and sometimes personal.”

Both realities are evident in Dubie’s tender poem in the form of a letter from the soon-to-be executed Czar Nicholas of Russia to his mother:u0000

Alexandra conducts the French and singing lessons.
Mother, we are again a physical couple.
I brush out her hair at night.
She thinks that we’ll be rowing outside Geneva
By the spring. I hope she won’t be disappointed.
– from Dubie’s “The Czar’s Last Christmas Letter:
A Barn in the Urals.”

The past 30 years have been good ones for American poetry, St. John concludes in a 1993 Los Angeles Times Sunday Book Review review of Dark Harbor, Mark Strand’s book-length poem.

St. John contends that “never before have so many poets of true stature and lasting importance written so powerfully and beautifully, some addressing the urgent issues of social reckoning that presently face us, others exploring those timeless questions concerning the individual self and soul. [Strand’s Dark Harbor] comes to us as a timely reminder [of] the great power and solace of American poetry at its very best.”

It is a power and solace that St. John hopes to reveal to readers through Where the Angels Come Toward Us.u0000

A defense of poetry