A major problem with the United States’ view of North Korea is the tendency to caricature its leader, Kim Jong Un.

“This is a real leader that we need to take seriously,” said David Kang, director of the Korean Studies Institute based at the USC Dornsife College of Letters, Arts and Sciences. “It’s very clear [Kim] knows how to rule. The question of whether he’s crazy, or a joke, misses the point.” 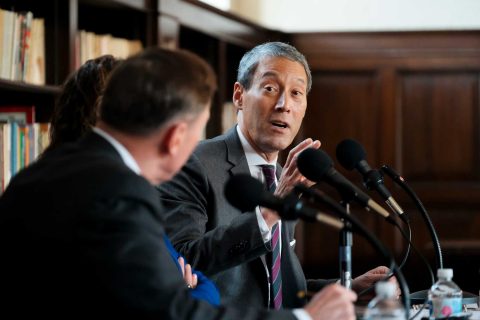 Kang was speaking to a packed audience during “Nuclear War with North Korea?,” the latest in the Dornsife Dialogues event series.

Amid North Korea’s dramatic acceleration of its nuclear testing program, provocative rhetoric between President Donald Trump and Kim has escalated, leading to fears of a nuclear war. USC Dornsife Dean Amber D. Miller moderated the discussion on Nov. 28 between Kang and retired U.S. Army Gen. David Petraeus about the likelihood of war and alternatives that could avoid conflict.

Kang, professor of international relations and East Asian languages and cultures, is director of USC Dornsife’s Center for International Studies.

The view from America

Kang and Petraeus agreed that Trump’s recent tour of Asia had been successful. Kang said the U.S. president had hit all the right notes when talking about North Korea in Japan and South Korea.

“The message I hear from President Trump, even though it’s a little more flamboyant … remains a deterrent message [of] … ‘if you attack us first, we will fight back,’ which is what every American president has said since I can remember,” noted Kang, who holds a joint appointment at the USC Marshall School of Business.

With China controlling 90 percent of the trade to and from North Korea, the U.S.-China relationship depends on how successfully China is able to pressure the Hermit Kingdom to halt missile testing, Petraeus said. 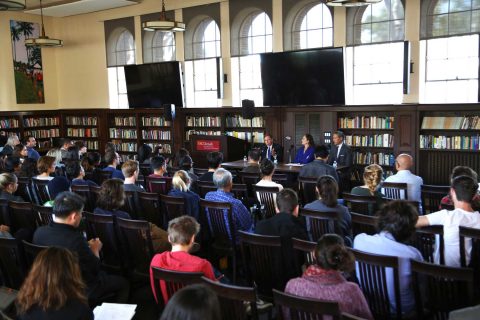 “By and large, the saber-rattling, all these discussions of military options … this is not aimed at Kim Jong Un,” Petraeus said. “I don’t think people think they can influence him. This is aimed at President Xi Jinping and China and getting China to do more to bring a halt to testing and bring Kim Jong Un to the table.”

Noting that the current U.S. administration faces a different prospect from its predecessors — the possibility that North Korea could launch a nuclear strike on a western U.S. city — Petraeus said it was important for the U.S. to remain measured in its objectives and not get carried away into thinking it could denuclearize the Korean peninsula.

Ensuring China understands the potentially dramatic strategic ramifications if it fails to bring North Korea to halt testing is key, Petraeus said. Consequences of such a failure might include South Korea and Japan embarking on nuclear weapon development programs of their own, he said, leading to the potential strategic destabilization of the region.

Petraeus warned of the dangers of the so-called “madman theory” of deterrence associated with former President Richard Nixon and now with Trump. The concept operates by encouraging leaders of hostile nations to believe the U.S. president is volatile and irrational so those leaders will avoid provoking the U.S. for fear it might do something untoward.

“The problem with that concept is that if you do get into a crisis, even inadvertently, … sudden[ly] the last thing you want is for the other side to think that you’re a madman because they’ll think you’ve already taken the slack out of the trigger,” Petraeus said.

Kang stressed that while North Korea also uses flamboyant rhetoric, their message is consistently one of deterrence: “If you attack us first, we will hit you back.” Both North Korea and the U.S. are thus essentially saying the same thing, Kang noted.

Sanctions versus a limited military option

Could the U.S. get away with a limited surgical strike?

“Everything I know about North Korea is if we hit them, they will hit us back,” Kang said. “… So we can threaten a little bit, but I think we start to go down a very dangerous path if somebody starts shooting.”
Petraeus said that while a limited option is possible, the challenge is whether it will remain limited. It’s also unlikely that South Korea, a key ally, will approve such a move because its capital, Seoul, is within range of Pyongyang, which is also believed to have biological and chemical weapons. 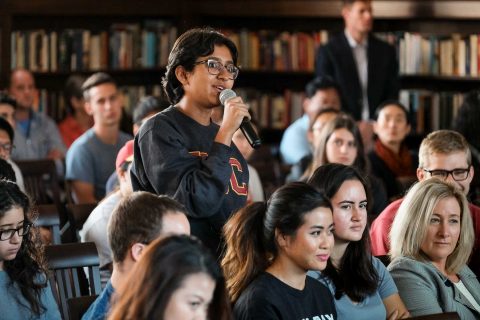 Kang does not see North Korea backing down as a result of economic sanctions and believes they may in fact cause the country to double down. However, secondary sanctions on banks to try to stop them from dealing with North Korea in an effort to prevent it from obtaining components for its nuclear programs may be more successful, he thought.

Petraeus was more optimistic about sanctions, especially if China enforces United Nations Security Council sanctions. Secondary sanctions on Chinese banks could put pressure on China to do this, he said.

“China could literally turn the lights out in Pyongyang if it wants to,” Petraeus said. “It won’t, probably because it wants to … bring Kim Jong Un to his senses, but not to his knees. They don’t want North Korea to collapse. Their three red lines are no hostile power in Pyongyang, no reunification of the Korean peninsula and no wave of refugees across the Yalu River into China.”

That, Petraeus noted, depends on whether he’s suicidal.

“The analyses … for a number of years in the intelligence community, have been that he’s not suicidal,” Petraeus said.

“I’m quite sure that if we don’t start a war, North Korea is not going to start it first,” he said. “… I don’t think that North Korea is a problem to be solved. I think it’s a country we have to live with.”

Are U.S. and North Korea in a stalemate or on the cusp of confrontation?

Excelling as a USC student and postdoctoral fellow, Soonja Choe has led advances for women in sciences and engineering.

The new agreement paves the way for a mutual exchange of educational programs, training and research.

Can a nuclear war with North Korea be avoided?