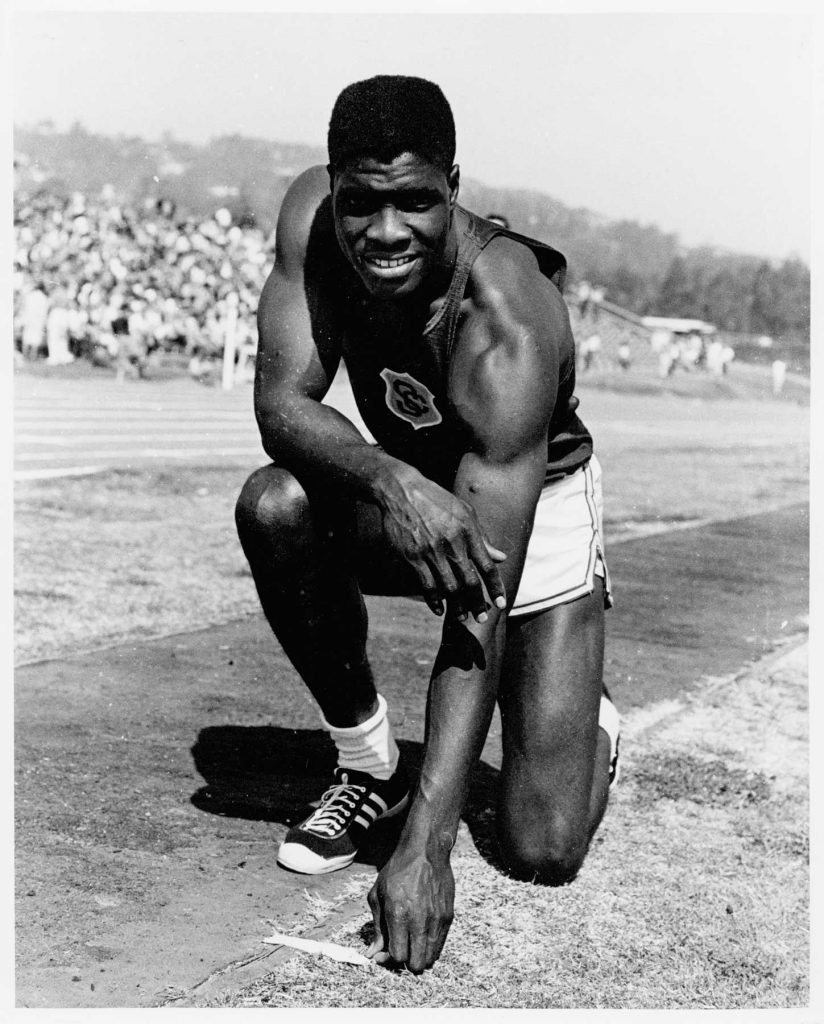 Luther Hayes lettered in football and track and field. (Photo/Courtesy of USC Athletics)

Luther Hayes, who won a pair of NCAA triple jump titles in the early 1960s while at USC and also played a key role in the Trojans’ 1958 football game against UCLA, died on Nov. 23 in Palos Verdes Estates due to natural causes. He was 78.

Hayes came to USC from San Diego’s Lincoln High (he previously had attended San Diego High), where he was on the football, basketball and track teams. He was All-City in football and was the 1957 state long jump champion.

Hayes was a two-way end in football at USC. His 74-yard kickoff return for a touchdown with 6:50 to play in the 1958 UCLA game (and the Trojans’ ensuing two-point conversion) tied the game at 15-15, which was the final score. He had 14 career receptions at USC, including a team-best nine for 179 yards with two touchdowns in 1959 when he also made 44 tackles on defense to earn All-American honorable mention and All-Conference second team honors. As a sophomore in 1958, he had four catches for 68 yards along with 27 tackles and an interception. An injury slowed him during his 1960 senior campaign.

He was on Trojan track teams that won the conference championship all three of his years and captured the 1961 NCAA team title (USC was the NCAA runner-up in 1960). He won the NCAA triple jump crown in 1960 and 1961, becoming the first man to win a pair of NCAA titles in the event that was then called the hop, step and jump. His 51-2 ¼ leap in 1961 was an NCAA Meet record. He also was second in the 1961 NCAA long jump (then called the broad jump). He was ranked 10th in the world in the triple jump in 1961. He also captured the conference triple jump and long jump crowns in 1960 and 1961, setting a USC record while winning the 1961 triple jump (51-9 ½). It was 27 years before another man won both of those league events in the same year.

After his playing career, he was a teacher in the Los Angeles City School District and coached at Crenshaw High, California State University, Northridge and Los Angeles City College, where he also was an academic counselor.

Hayes is survived by his wife, Anita, daughters Andrea Jordan and Crystal Hill and son Luther, as well as sisters Mary Jones and LaVerne Perkins and four grandchildren.

The team starts next season against UNLV and wraps up with UCLA and Notre Dame back-to-back.

His family lives 7,000 miles away, but USC linebacker Oluwole Betiku feels at home

One reason: Fellow countrymen on the football team, all chasing the dream of success an ocean away from Nigeria.

A dream comes true as the long snapper takes the field during USC’s win over Western Michigan, and leaves his mark on the scoreboard.

In memoriam: Luther Hayes, football and track star at USC, 78