Thanksgiving can be a lonely holiday for international students and those who can’t travel home to visit family and friends.

But hundreds of USC students who would have spent last Thursday on their own had plenty to be thankful for this year. Continuing an annual tradition she started years ago, Niki C. Nikias, wife of USC President C. L. Max Nikias, welcomed students into their home for a classic Thanksgiving meal.

“We open our doors to many visitors throughout the year, and this event is particularly special,” she said. “It warms our hearts to see all these young students — who would otherwise not be able to make it home — gather together with their Trojan Family and experience this very American tradition.”

Every November, Niki Nikias takes charge of the event, like many of the dinners and parties she hosts at the home. She decides on a new theme and menu for each Thanksgiving meal, and strives to ensure the gathering feels like a family affair. 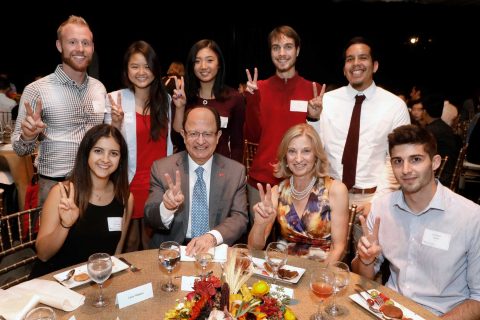 USC students from other countries and far-off states enjoy a Thanksgiving meal with the Nikiases. (Photo/Steve Cohn)

She sees it as an extension of previous Thanksgiving holidays, when her daughters, Georgiana and Maria, would invite friends over for a home-cooked meal. But it’s fair to say the event has outgrown those smaller celebrations. To ensure everyone had plenty to eat, this year’s meal required 37 turkeys, more than 300 pounds of potatoes and yams and 80 pies.

The tradition began in 2010, when Niki Nikias suggested hosting students who wouldn’t be traveling home for Thanksgiving and likely would remain alone on a quiet campus. The gathering also would offer an opportunity to introduce international students to the unique customs of the American holiday.

President Nikias had just become the university’s president that August, and the Nikiases didn’t move in to the USC President’s House until the day before Thanksgiving. Undaunted, they opened their doors the next day to 400 USC students for a festive meal on the residence’s rear lawn.

“My husband and I both know how lonely it can be around the holidays, having come to the United States as international students ourselves,” Niki Nikias said. “It feels wonderful to give USC students a little taste of home, and to share some of American culture with our international students. This is what the Trojan Family is all about.”

A similar scene unfolded last Thursday evening, when a convoy of trams brought students from USC’s University Park Campus to the doorstep of the San Marino, Calif., home. As the students filed into the residence, they were greeted by the Nikiases.

“Right at the front door, they were waiting and giving everyone a handshake on the way in, which was pretty cool,” said Ricky Coles, a first-year graduate student studying postsecondary administration and student affairs at the USC Rossier School of Education.

This was Coles’ first Thanksgiving away from his family in Utah. As an undergraduate at Utah State University, he was only a short drive from his parents and brother, but this year he decided to stay in California rather than flying home, especially because winter break is only a few weeks away.

“Of course you miss your family at this time of year, especially Thanksgiving,” he said. “But this was an amazing opportunity to meet the president and his wife. They are so friendly. They shook hands with everyone and took pictures.”

After introducing themselves to the Nikiases, the students gathered on the back lawn under a marquee adorned with decorations showcasing this year’s theme of a traditional harvest. One of the attendees, Shuyan “Lia” Li, described a generous banquet of classic Thanksgiving food, including turkey, potatoes, roasted vegetables, pies, pasta and salad.

Although the first-year graduate student at the USC Annenberg School for Communication and Journalism is technically an international student from China, she has lived in the United States for eight years and was familiar with the celebration. It wasn’t the first Thanksgiving for Shuyan “Lia” Li, but the 2017 meal at the USC President’s House was her first USC Thanksgiving. (Photo/Steve Cohn)

“It wasn’t my first Thanksgiving, but it was definitely my first USC Thanksgiving, which was unique,” said Li, who is studying communication management. “I got to share a meal with hundreds of people.”

She recounted a short speech by President Nikias, who described the tradition of Thanksgiving and expressed gratitude that so many students had come to share a meal with his family.

“I enjoyed the atmosphere and the food,” Li said. “They offered a lot of dessert, and I had two slices of pie. I was pretty full after that.”

Coles had the honor of sharing a table with President Nikias and Niki Nikias, along with seven other students. He took the opportunity to ask about their background — “They are high school sweethearts” — and personal experience coming to the United States as international students from Cyprus. He said the meal made him feel more connected to USC.

“It really fulfills the university’s mission of creating an inclusive environment, bringing individuals from all over the world closer together,” Coles said. “If you came alone, you had a chance to meet eight new individuals, which is fun.”

That is an encouraging sign for the Nikiases, who said the annual Thanksgiving gathering has become more than just a hearty meal; it offers an opportunity to build new friendships and create lasting bonds.

“This holiday inspires us to think about the many things we can be thankful for as members of the Trojan Family,” President Nikias said. “This university truly is special in how it builds a lasting connection across generations, and I’m grateful that Niki and I are able to bring this wonderful tradition to our students.”

Students find home away from home at annual Thanksgiving dinner