Deryck Pham DDS ’04 always wanted to serve his country. “That’s why I joined the military,” he said.

Pham spent three years — including seven months in Iraq at a Level 1 Trauma Center — in the Marines, working as a dentist and triage doctor.

“I saw firsthand the PTSD [post-traumatic stress disorder] going on and everything these men and women were going to have to deal with when they came back to the States,” he said. “I knew when I got out, I wanted to give back to my fellow veterans.”

In 2012, Pham started Veterans Smile Day, a day (or days) in which hundreds of dentists across the country offer free dental care to veterans. Timed to coincide with Veterans Day, this year’s event ran from Nov. 6-10.

“Most veterans don’t receive dental care,” he explained. “I knew there was a need that I could fill.”

Many service members don’t qualify for full benefits once they return from active duty. To receive dental care, veterans must meet certain eligibility requirements, including having a service-related dental condition or being considered 100 percent disabled, according to the U.S. Department of Veteran Affairs. 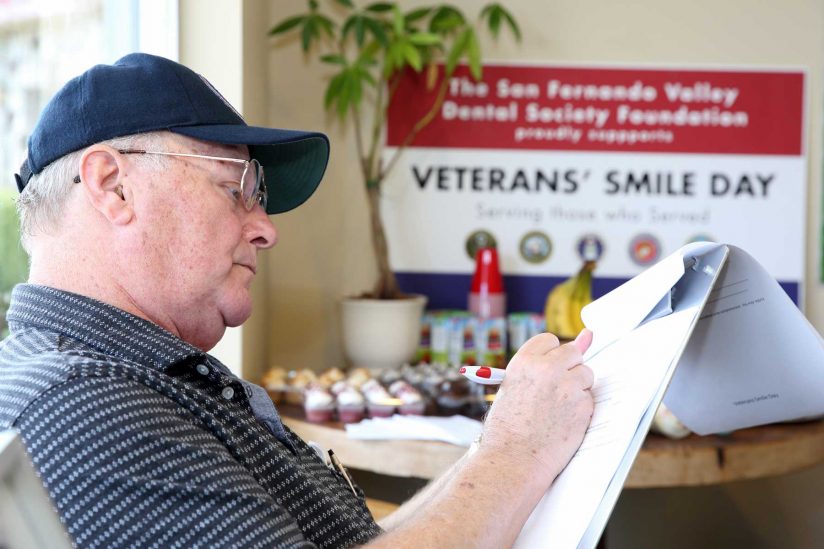 “It’s very rare for a vet to be 100 percent disabled,” said Karin Irani DDS ’03, one of the first providers to participate in Veterans Smile Day. “I found that of the 22 million vets in the country, 90 percent don’t receive dental benefits.”

Additionally, long wait times and limited care at Veterans Affairs hospitals make treatment difficult — even for those who qualify.

“My dad was a veteran, and I grew up with him having to leave for three to six months at a time,” Irani said. “I understand sacrifices made by service members and their families, and I thought this was a great cause.”

In 2014, Irani and Pham teamed up to raise awareness and take Veterans Smile Day to a national level.

Through her connections with the American Dental Association and other organizations, Irani reached out to a wider network of providers to promote the event.

So many people and organizations weren’t aware that veterans don’t get dental benefits.

“So many people and organizations weren’t aware that veterans don’t get dental benefits,” said Irani, who also helps dentists in California organize and schedule patients for the event. “When doctors hear that, they want to give back. Any doctor can give one day a year to veterans so that makes it easy to volunteer.”

In three years, the program quickly grew from 30 participating providers to more than 600. So far, as many as 5,000 veterans have been treated.

“When people hear about it, they immediately ask how they can help,” Pham said. “Whether it’s opening their practice or going to someone else’s office to participate, the goal is to make it an official day across the country where dentists serve veterans.”

Pham said his education at USC helped drive his desire to give back.

“Working at the dental clinic at the Union Rescue Mission in downtown L.A. and in the mobile clinic treating kids at underserved areas, USC’s always pushed us in those areas,” he said.

“The USC spirit has always been about giving back to the community,” Irani added, “and I learned that from day one.”

“Some do cleanings and exams,” Pham said. “We do everything except dentures and crowns.”

“It’s a golden opportunity,” he said. “I’ve known people [without dental insurance] who pulled out their own teeth.”

The 71-year-old learned about the event through his VFW and has been treated at Pham’s office for the past three years.

“He has a good heart and he’s a veteran — that makes a difference,” Mac Farlane said. “They treat us well — there’s coffee and donuts, and I get to talk to a lot of other veterans.”

Offering more than free care, many dentists turn the day into a celebration to honor veterans, complete with food, banners and other special treatments.

“I haven’t had one doctor say they’ve had a bad experience,” Irani said. “The veterans are all so grateful.”

Drilling, filling and X-rays: Undergrads learn what it’s like to be a first-year dental student

USC’s Dental Explorers program introduces minority students to dentistry and its specialties, including orthodontics and pediatrics.

Students, residents and faculty of the Ostrow School of Dentistry of USC took part in the Care Harbor service event last month at the Los Angeles Sports Arena.

Hundreds of disadvantaged military veterans received medical help, counseling, employment assistance and other services as part of the eighth annual Compton Stand Down organized by the nonprofit group U.S. Vets on Sept. 24-26.

Ostrow faculty and students stand up for veterans