Considered a safe and highly effective contraception method, intrauterine devices (IUDs) may also be quietly offering protection against the third-most common cancer in women worldwide. A new study from the Keck School of Medicine of USC has found that IUD use is associated with a dramatic decrease in the incidence of cervical cancer.

The systematic review, published in Obstetrics & Gynecology on Nov. 7, is the first to combine data from multiple studies on IUDs and cervical cancer. The analysis included data from 16 high-quality observational studies involving more than 12,000 women worldwide. Results showed that in women who used an IUD, the incidence of cervical cancer was a third lower. 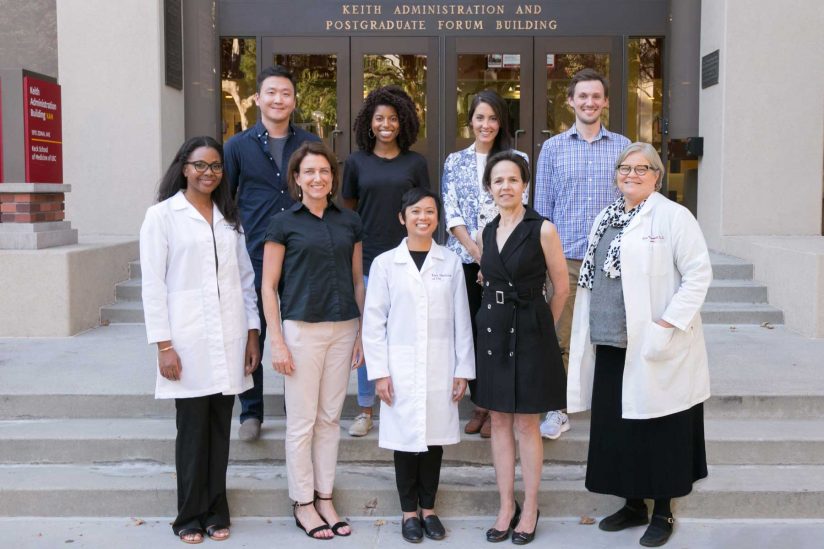 Victoria Cortessis, front row, second from right, and the research group that worked on the study. (Photo/Ricardo Carrasco III)

“The pattern we found was stunning. It was not subtle at all,” said the study’s lead author, Victoria Cortessis, associate professor of clinical preventive medicine at the Keck School of Medicine. “The possibility that a woman could experience some help with cancer control at the same time she is making contraception decisions could potentially be very, very impactful.”

For women in developing countries, where cervical cancer prevention resources such as the human papillomavirus (HPV) vaccine or regular cervical screenings are scarce, and where populations are increasing rapidly, a contraceptive that offers protection against cervical cancer could have a profound effect, Cortessis said.

Should gynecologists begin recommending IUDs for protection against cervical cancer?

Not quite yet, but it could be on the horizon. Understanding the mechanism of action behind the protective effect of IUDs is the next logical step, Cortessis said. Some scientists speculate that the placement of an IUD stimulates an immune response in the cervix, giving the body an opportunity to fight an existing HPV infection that could one day lead to cervical cancer. Another possibility is that when an IUD is removed, some cervical cells that contain HPV infection or precancerous changes may be scraped off.

If researchers can demonstrate that the body mounts an immune response to having an IUD placed, for example, then they could begin investigating whether an IUD can clear a persistent HPV infection in a clinical trial, according to gynecologic oncologist and study coauthor Laila Muderspach, chair of obstetrics and gynecology at the Keck School.

“The results of our study are very exciting,” she said. “There is tremendous potential.”

‘Precision medicine’ for cancer patients may not always be so precise

IUDs may have a surprising benefit: protection against cervical cancer