Wendy Liu slices into some Swiss chard, chopping it up for a salad.

In a second, she’ll pop it in a pan to warm it up, topping it with some red onions and mixing in some lentils.

“I’ve never cut before, like cut vegetables,” Liu, 18, said. “I helped my mom cook but she never let me use a knife. I usually did the washing.”

Liu is experiencing some culinary firsts thanks to a pilot program at USC. Edible Education, put on by USC Hospitality, aims to educate students on nutrition, grocery shopping and getting in the kitchen, doing hands-on demonstrations like this one today. 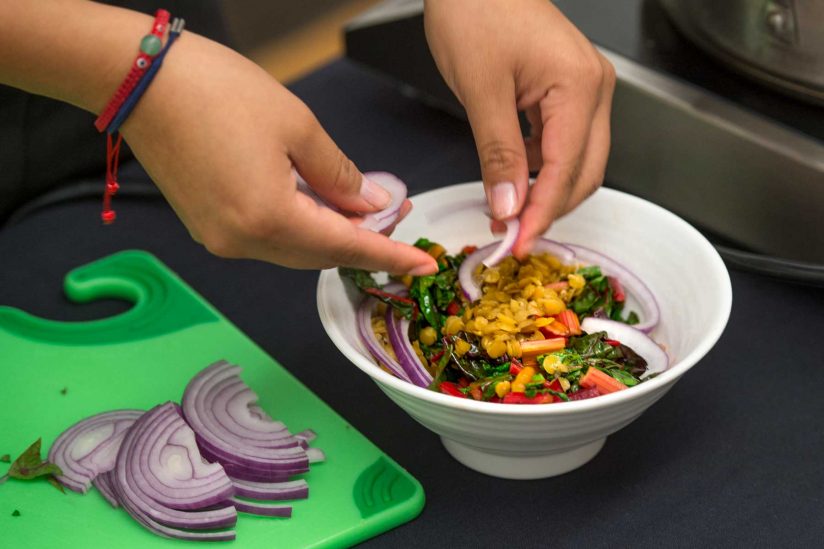 The program — held once a month throughout the semester — aims to reach not only students interested in nutrition and home-cooking but also students who are typically low-income or food insecure, partnering with Trojan Guardian Scholars and Norman Topping Scholars. The pilot program has six students.

Liu, a freshman, has her unlimited dining hall swipes for now. But once May rolls around, she’ll have to fend for herself.

“I think this is a great opportunity to learn so next year when I live by myself, I’ll be ready and equipped,” she said.

Erika Chesley of Auxiliary Services had students like Liu in mind when she came up with the program. She noticed how students are largely left on their own to figure out cooking once they move out of university housing. She saw it with her own daughter.

“Her sophomore year she moved into an apartment and called me and was like, ‘Mommy, I don’t know how to cook,’ ” she said. When she came home for the holidays, Chesley showed her the ropes, and now she’s an avid cook.

“I hear so often that they want to learn how to cook,” said Lindsey Pine, a USC Hospitality dietitian. “When [Chesley] suggested this program, it sounded like a great opportunity to give skills to these students.”

The program listens to what students want, offering tips on everything from batch cooking and reading nutrition labels to plant-based recipes. 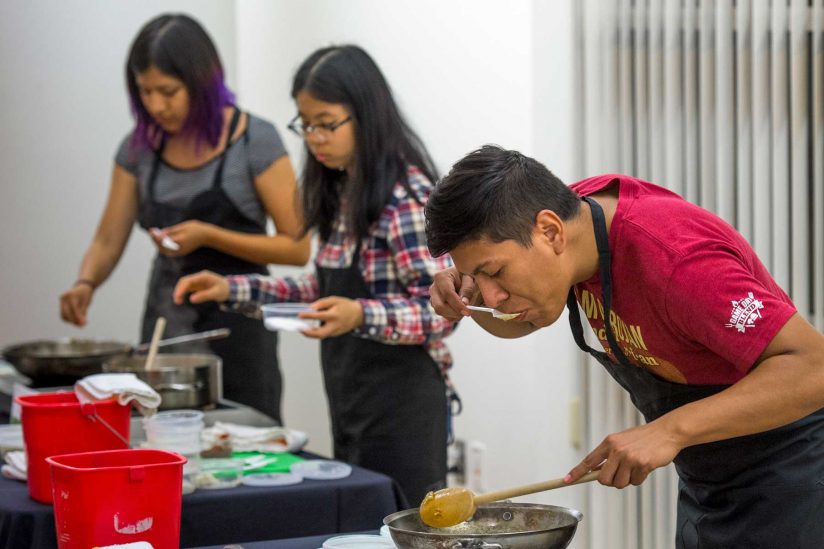 Juan Gerardo Aceves, 23, checks on the stew he is cooking with lentils, golden beet and coconut. (USC Photo/Gus Ruelas)

Juan Gerardo Aceves, 23, was wearing his blendaterian shirt, a type of burger USC Hospitality has that’s made from both meat and mushrooms. With a busy schedule, he wants to learn how to maximize his time in the kitchen.

“I wanted to learn more about meal prepping,” he said. “I heard I got to learn from the chefs and that was something intriguing to me.”

Chef Nathan Martinez of USC Village led the cooking demonstration. He is a lifelong cook, first donning an apron at 6 years old when he helped his family barbecue.

He walked around as the students stood behind their portable burners, cooking the main entrée, a lentil and golden beet coconut stew.

Stirring hers with a wooden spoon, Liu said: “I’m making curry for the first time.”

After they were done, they balled up their aprons and plated their dishes on ceramic plates, sitting together around a table.

Each student’s dish was a bit different. Some had a creamier curry, some had a kick. Some did their salad hot, some tried it cold.

But the verdict was the same: Tastes good.

Three degrees in five years: It’s all in the family for this USC grad

Opportunity and mentoring were high points at USC for Ali Sahimi, who was inspired by his family’s medical history and record of academic achievement.

Specialized programs from the USC Leonard Davis School of Gerontology provide flexibility for an in-demand field.

Once ‘lost,’ she discovered her passion for nutrition as a USC master’s student

Shauna Davis finally feels like she’s headed in the right direction, thanks to the online Master of Science in Nutrition, Healthspan and Longevity program at the USC Leonard Davis School.

Hannah Kohanzadeh is one of just six people selected to be a graduate summer assistant in the California Department of Finance.

After a one-year delay due to COVID-19, the Tokyo Olympics kicked off last week. USC experts discuss the Games’ public perception and possible health ramifications for their host city.